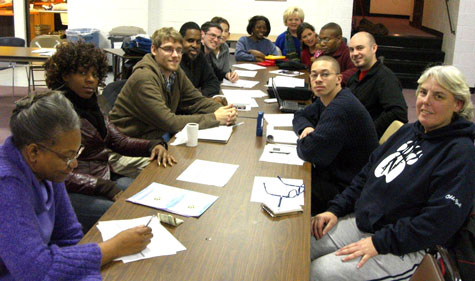 The North High Community Coalition met December 18 to discuss preserving the institution and its historic role in the Northside community.

In October 2010, the Minneapolis School Board announced plans to close North Community High School due to poor performance and declining enrollment. Since then, community activist Mel Reeves and a few other dedicated individuals in North Minneapolis committed to keeping North Community High School open organized to form the Committee to Save North High.

“We were a coalition of groups, individuals, activists, community members and [other] concerned people who came together,” Reeves explained. The coalition is mainly made up of members of the North High Alumni Association, the Friends of North High, and Public Education Justice Alliance of Minnesota (PEJAM), as well as teachers, students and parents from North High.

A rally and protest outside of the Minneapolis School Board’s Broadway headquarters was organized by the group shortly after getting the news of North High’s proposed closing. This helped persuade the board to vote in November to postpone the closing of North High. An agreement was reached to keep the school open on the condition that 125 students enroll as freshmen next year.

The committee, now known as the North High Community Coalition, is a group intent on being recognized as a relevant representative of the community surrounding North High School. During one of the coalition’s weekly meetings held on December 18 at Zion Baptist Church, approximately 15 people from all walks of life were in attendance (which, according to Reeves, was a significantly lower turnout than previous meetings).

Those present represented everyone from parents, alumni, and concerned members of the community to members of Friends of North High and PEJAM. There were also people from the professional field, including teachers, University of Minnesota Professor Dr. Rose Brewer, and Minneapolis Federation of Teachers Local 59 President Lynn Nordgren.

While a wide range of topics were discussed related to preventing the closing and/or restructuring of the school, the main focus was on who would be involved in the selection process of a “design team” – a team charged with restructuring North High’s curriculum. Some expressed concern about Minneapolis Schools Superintendent Bernadeia Johnson’s process for selecting this team, as well as the community’s involvement – or lack thereof – in that process.

While the group considered what recommendations they might make to the superintendent, Nordgren spoke about a recent trip she made to Harlem. She visited a charter school that she learned about and was personally impressed with and talked about how the school provides training for other learning institutions interested in emulating their model of success. While people in attendance were intrigued, many expressed a desire for the issue to be addressed and rectified by those with a closer connection to the local community.

There was also a heavy emphasis put on recruiting students to enroll at North High. Most participants in the meeting eagerly volunteered to go door knocking and help spread the word to the community.

Leola Seals of the African-American Historical & Civil Rights Museum put it bluntly: “We need to be more aggressive and not sit around the table and talk about what we need to do. We need to meet the community and see what the community needs! We can’t talk down to the community, because [that makes us] no better than the school board… They make decisions and tell us.”

When asked what he would like people to know about this effort, Reeves offered, “We need more community involvement. This is an exciting opportunity – we need for people living on the North Side to understand that this is the chance for them to have a little more say in what’s going to go on in their children’s education; that actually sending your kid to North High right now is a good idea. With all the community participation, all the community concern, we’re not just talking.

“Also,” Reeves continued, “it’s important for people to know that this goes deeper than just maintaining a high school in our community. If we can begin to make North High School our high school again, we can begin to put a dent in the dropout rate, as well as get a handle on some of the violence happening.

“This gives us a chance as a community to come together and embrace our adolescents.”

North High Community Coalition meetings are scheduled for every Saturday at noon (next meeting January 8) at Zion Baptist Church, located at 621 Elwood Ave. N. in Minneapolis. For more information, contact Mel Reeves at 651-403-0338 or by email: mellaneous19@yahoo.com.