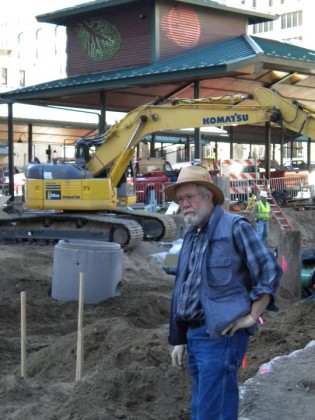 Why does Dr. Bill Owen-Snow, Director of Osteology at the DeWinter Archeological Institute at McGill University, say digging at this site should come to a screeching halt?

Workers performing advance utility relocation work in preparation for light rail construction in Lowertown have stumbled across what local authorities believe may be a long lost royal complex that is likely the final resting place of Boreas the Brrrave. It is not unusual for the refuse of bygone eras to turn up during large scale excavations such as that which has been taking place in Lowertown this past summer.

Similar work on the Hiawatha Line in Minneapolis uncovered scores of bottles, household, more than a few horseshoes. The quality, variety, and sheer volume of items discovered beneath 4th street have, however, prompted calls for a halt to further work on the project – if only temporarily.

Hy Berman, Professor Emeritus at the University of Minnesota, believes that the construction workers may have tapped into a long rumored complex of underground chambers and tunnels that were the playground of the ancient court of Boreas. Most knowledge of the complex has been lost with passing generations and what little remains known has blurred into the realm of folklore. 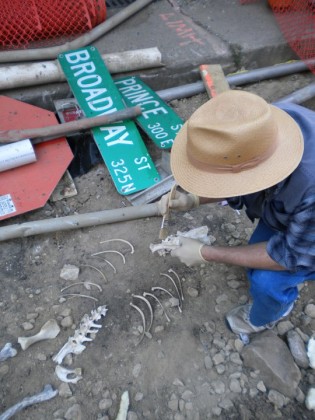 The Metropolitan Council can’t sweep the evidence under the rug so easily. Bones at the corner where the Black Dog Coffee and Wine Bar is located.

“I remember my uncles talking about all-night bacchanals held in ornate subterranean chambers that were accessed from a tunnel behind the fireplace at what used to be the Buttery on Robert Street,” says Jim Miller, owner of the Jax Building on 4th and Wacouta. “In those days the polite society kept their carousing and debauchery behind closed doors, and presumably under the floors.”

And they presumably had a soft spot for Tia Maria. That is the preliminary assessment of Lowertown Wine and Spirits’ Jerry Blakely upon inspecting some of the unearthed bottles and crocks. “We’ll know definitively after the lab analysis by the Minnesota Spirits Council, but my gut tells me its Tia Maria.”

Lettie Eastwin of the Ramsey County Commission for Historic Preservation is leading an ever-louder chorus in calling for a temporary halt to the use of heavy equipment in the area until an archeological survey can be conducted. Metropolitan Council Chair Peter Bell counters that even a temporary halt would spell the end of the project just as it’s getting underway. “Any halt to the work on the Central Corridor will be the end of Light Rail in the Twin Cities. If we can’t meet their timetable, the Federal Transit Administration will pull the plug and send our funding to Omaha or Minot.”

Along Fourth Street opinion is divided. Dawn Ledin of Station 4 thinks the history is cool but only to a point, “I just need to get the damn street paved so our bands can get their buses in here and they don’t have to portage equipment across the stream in Mears Park.” The Board of Twin Cities Public Television is reportedly considering seeking a court order to suspend construction “until such time as a new installment of ‘Lost Twin Cities’ can be filmed.”

The sponsors of the Winter Carnival, the Saint Paul Festival and Heritage Foundation, have remained silent on the subject up to this point. News of the possible Boreas link appears to be spreading and pressure is likely to build for the Carnival to take a position. At the Tanpopo Noodle shop in the Northern Warehouse, Koshiki Yonemura reports seeing increasing numbers of onlookers at the dig site. “Some actually seem to be wearing winter coats and they tie things like mittens and buttons to the safety fence. It’s almost like they’re leaving some kind of offering.”