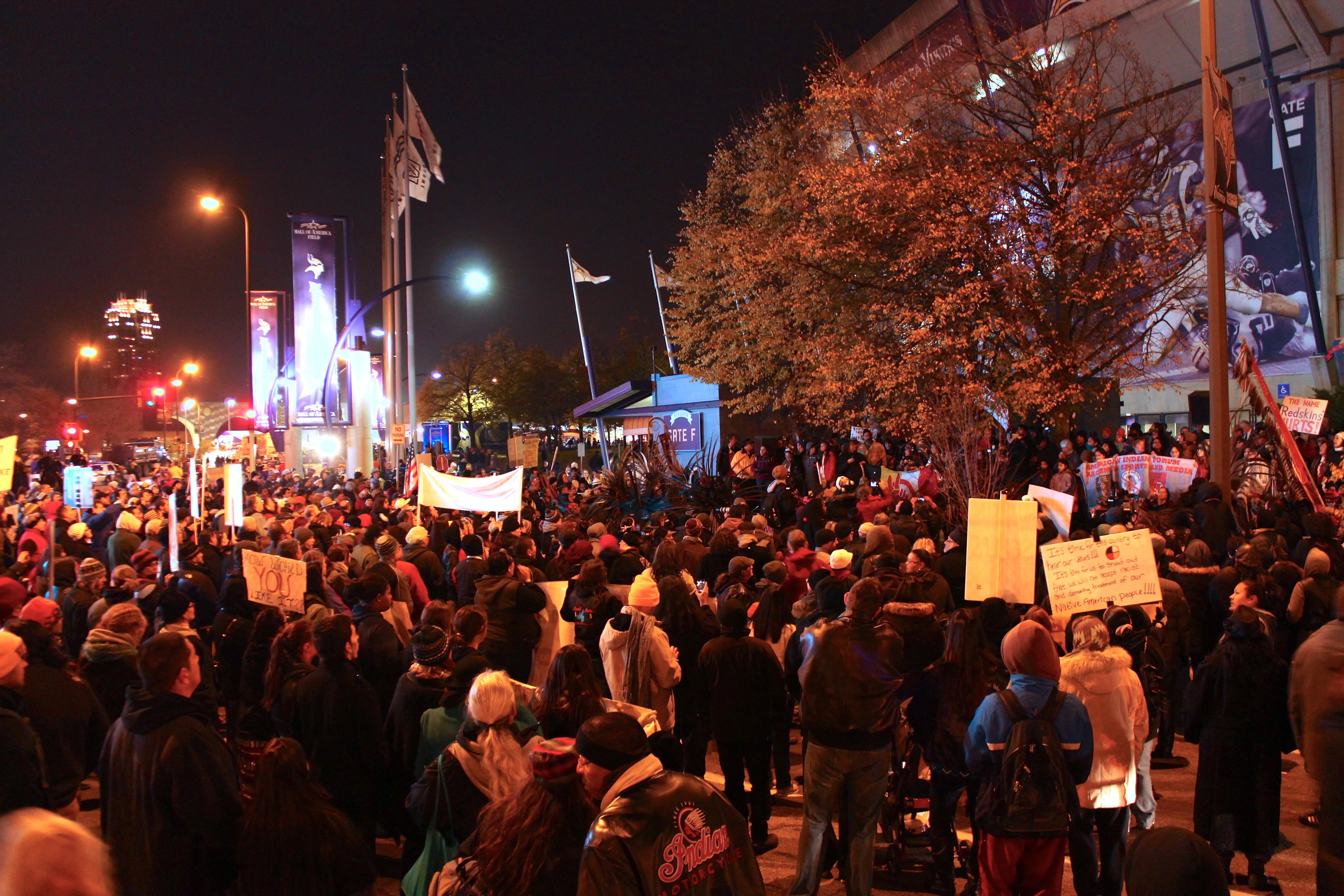 Hundreds of protesters rallied outside the Metrodome on November 7. denouncing the nickname of Washington’s NFL franchise, the Redskins.

Organized by the American Indian Movement, protesters carried signs, beat drums and danced their way from the Ancient Traders Market on East Franklin Avenue down Chicago Avenue, and arrived at the Metrodome around 5:30 p.m. to listen to speeches by the movement’s leaders and political supporters.

The mascot issue has been a source of contention for years, with Minneapolis witnessing a similar protest back in 1992 when the Metrodome hosted the Washington team in Super Bowl XXVI.

“We’re finally getting there,” said AIM’s national leader, Clyde Bellecourt, who expects the mascot name will be out in the next year. Momentum is building, as more and more public figures have begun speaking out against Washington, not just in Minnesota but nationally as well. Many high school and collegiate teams having retired their Native American mascots over the last few years.

Even President Obama stated publicly he would really “consider changing the name” if he was Snyder, the owner of Washington’s team.

AIM is considering its legal options to prevent Washington’s name and logo from being displayed.

AIM’s legal counsel, Larry Leventhal, announced in a press conference on November 6 that they filed a petition with the Minnesota Department of Management and Budget to evaluate whether the new Viking stadium will be consistent with human rights standards.

Leventhal said the appropriation of public funds for a new stadium which hosts a racist mascot would violate state and federal human rights laws which prohibit discrimination in public accommodations. He also indicated they are considering a class action suit on behalf of Native children who have suffered injury from the continued use of the Redskins nickname.

The issue is not simply that a nationally prominent racist caricature exists, said Bellecourt. The important issue is the damaging effect images like Washington’s mascot have on native youth, who bear the brunt of racial stereotyping.

“The R-word is no different from the N-word,” said Bellecourt at a press conference earlier this week. “These caricatures have a real psychological effect on our children.”

Youth from Little Earth of United Tribes Youth Development Center in Minneapolis hosted their own rally, just before the main protest.

“They came to me,” said Frank Downwind, the YDC’s director. “They wanted to make a stand themselves.”

“A lot of people don’t see how it’s an issue, they even see it as an honor,” continued Downwind. “But what society doesn’t understand is when you reduce a people to a caricature or a cartoon, you dehumanize them. Then you can justify mistreatment of that people,” which becomes a cause of bullying.

“When I was younger, I had long hair, but I had to cut it to stop the name calling,” said Keegan Ziegler, who moved to Minnesota from South Dakota with longer-than-wasit-length braids.

“It feels like we’re a joke, that we’re not equal as everyone else. Kids would ‘war cry’ with their hands over their mouth,” said 16-year-old Francisco Reyes, who grew up in south Minneapolis. “Even teachers in school would act like we didn’t know better, because we were just being a typical Indian.”

Some Viking fans said they did not find the mascot offensive and could not see how it was damaging. One woman said she thought it would be an honor to have a mascot named after her people.

“The people who are bearing the brunt of the burden are the kids and they don’t always have the voice to speak out against it,” said Downwind.