With the devastating tornado that recently hit Oklahoma, fear has started to spread about the possible connections to climate change. The scientific jury is still out on whether climate change really impacted this tornado, but they are in agreement that climate change is indeed happening. And with CO2 levels passing a historic 400 ppm benchmark, the world is looking at an unsure environmental future. So what does climate change mean for the U.S. and more importantly, what does it mean for Minnesota? 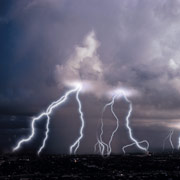 The effects of climate change on a land-locked state are different than on a state on or near a coast. Minnesota faces a few threats from climate change, including, but not limited to, more severe weather. The term ‘global warming’ is sometimes used interchangeably with climate change, but they are far from synonyms. While higher heat indices, droughts, and extreme heat incidents are definitely on the docket, we can also expect to see increased heavy precipitation which can cause flash floods.

We can also expect to see changes in the way Minnesota looks. One of the most beautiful parts of our state is the diverse vegetation. However, as the temperature increases over the next few decades, the types of plants that can survive starts to dwindle. Not all of our endemic trees can handle the project 5 degree temperature raise we are expecting to see by 2050. We are looking at a fundamental shift in what vegetation exists, where they live, and even whether they are actually native. Climate change means invasive species better adapted to higher temperatures could begin their slow but steady decent into our soils.

Our waters suffer as well. Increased temperatures and run-off after floods will forever change water chemistry and biodiversity. It is projected that lakes will take longer to freeze and will be quicker to thaw out. The winter months are essential to lake and river chemistry, especially when it comes to natural water filtration and turnover. Aquatic flora and fauna alike are at risk of no longer being able to survive in their ecosystems.

There are minimal benefits to a warmer climate, such as the possibility of an extended growing season. But the overall cost to our environment, and subsequently our economy, is too big to ignore. Minnesota has taken steps toward climate change mitigation, but more state and federal policy will be needed to really overcome the hurdles we will face in the future.