I had an interesting experience last night that I thought MN Progressive Project readers would like to hear about, and the best way to do this is to cross post something I wrote on my science blog, so that’s below. 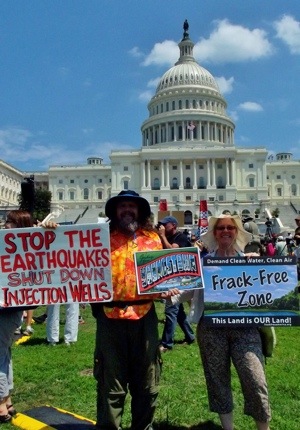 But before getting to that, there is an interesting press release from the Natural Resources Committee’s ranking member Rep. Ed Markey regarding Fracking:

A new draft rule to guide regulation of hydraulic fracturing, or fracking, of oil and gas resources on public and Indian lands weakens safety and environmental protections and restricts public knowledge of dangerous chemicals, Rep. Ed Markey (D-Mass.) said today. The Department of Interior new version of the so-called “fracking rule” ignores many suggestions made by Rep. Markey and other Democrats on the Natural Resources Committee, and appears to bend more towards the interests of the oil and gas sector, not the general public.

“This new fracking rule is extremely disappointing,” said Rep. Markey, the Ranking Member of the committee. “It gives oil and gas companies the freedom to frack without the proper safety protections and disclosures the American public deserve. Oil and gas companies like to say that every well is different, but this fracking rule would treat wells like cookie cutter activities, potentially leaving huge holes in ensuring that fracking activities on public lands are being done properly and safely. This rule essentially says to oil companies that they can frack first and ask questions later.”

The new draft DOI rule doesn’t require companies to disclose what chemicals they are using and how much before they drill the well. Adding insult to potential injury to public lands, the DOI rule then says that companies can use drilling practices on one completed well, and then apply them to multiple wells in the same area.

The rule also puts faith into the industry’s favored “FracFocus” Internet-based disclosure of chemicals, when that website is both not run by the federal government and does not allow for easy public access to the information, limiting oversight of the industry. Finally, it keeps open the question of open pit storage of wastewater, instead of requiring closed system containment.

“Because there are so many issues with this draft rule, 30 days is not enough to review this new version. DOI should provide more time for the public to express their views on this rule. I hope that Secretary Jewell listens to our concerns,” said Rep. Markey.

And now, the the other thing, pertaining to the OFA and Keystone XL, originally posted here:

Organizing for Action(OFA) is an offshoot of the Obama campaign, a grassroots non profit that is separate from any campaign committee (so they don’t support or run candidates) that organizes in favor of Obama’s issues like getting some sensible gun regulation or immigration reform passed in Congress, or keeping Obama care intact.

The organizer of the event described OFA’s structure and purpose, gave a bit of a pep talk, and then opened it up for discussion.

I was the first person to speak up, and after making a brief remark about some interesting climate science related news I won’t bother you with here, I brought up Keystone XL pipeline. I noted that it would be awful nice and a lot easier to get a climate change component of OFA going if Obama would just come out and say “no” to Keystone. The official OFA response, blew me away. Keystone XL might be someone’s personal issue, and that was fine, but since the President was neutral on it at the moment, OFA was as well.

Now, I don’t want to take credit or breaking the meeting. Had I not said something about Keystone, the guy next to me, or the woman behind me, or the guy two seats down, or the woman across the room, or any one of the 30 hard core activists attending the meeting, would have. I know this because once Keystone was brought up, and the need for Obama to take a stand, and in particular, oppose the pipeline was mentioned, everybody in the room had something to say, clearly indicating that they had all thought about it quite a bit.

Keystone is not a personal issue. It is the key, urgent, not-to-be-ignored grassroots issue that OFA and Obama should be all over.

I kinda feel bad for the organizer because he was swamped. I think we stayed on keystone for about an hour. He would say, “OK, let’s move on to a different issue. Sally, did you have something, I saw your hand up?” and Sally would say something very brief not about keystone, and then, “Well, I was in Nebraska last month chaining myself to construction equipment to stop the pipeline …” and then it would be back to the Keystone XL Pipeline. Or the organizer would say, “Oh, Bill, I see you’ve had your hand up,” and Bill would say, “Yeah, that idea of having house meetings to discuss climate would be good. This way we can get together and plan an organized push to get the President to do the right thing on the Keystone Pipeline..” and so on and so forth. (1)

There are two things that I now know for certain. The first, which I learned tonight, is that Obama for America will not have an effective climate change component if Obama does not come out in opposition to Keystone. Every single one of those activists is involved in a half dozen different projects, some focused on one issue, other on many, that they devote considerable time to, and that they regard, quite rightly, as very important. Many of the individuals in the room are heavily involved already in climate change activism and are already working with existing political groups, churches, or other organizations on climate change (our local 350.org guy was there for example). These climate change activists don’t need the OFA, though the OFA needs them. In fact, the meeting organizer had noted how great it was when OFA engaged in a new issue, and brought new volunteers into the fold in so doing. Most importantly, this little meeting tonight was a microcosm of the larger political landscape. Obama has to lead on climate change. He’s taken a few steps in that direction. And we’re all waiting around for the next couple of steps. Right now, Obama has not moved forward enough for us to find any space behind him so that he can actually lead us.

The consensus at tonight’s meeting was this: The local Minneapolis OFA has to take a message back to Obama and OFA headquarters: Yes, of course we’ll help. But first you need to get your head out of the sand. In particular, the Alberta tar sands. And then we will do more than help. We’ll carry you.

The second thing I know for certain, but that I didn’t learn from this meeting because I already knew it is this: The people of South Minneapolis (and adjoining inner ring suburbs) are awesome. (2)