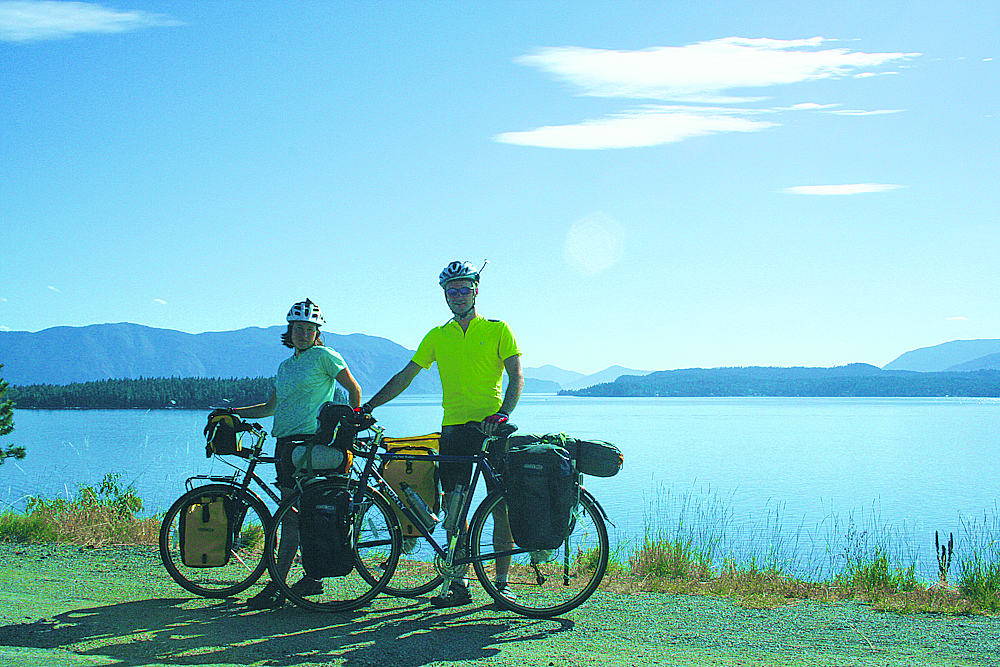 Alec Neal, a 26-year-old artist and activist living in West Calhoun, has what it takes to tackle climate change: vision, focus, endurance, youth and hope. An art major and soccer player while a student at University of Wisconsin-Madison, Alec says his life changed course dramatically when he and his partner, Katherine Ball, attended the 2009 United Nations (UN) Climate Change Conference in Copenhagen, Denmark, where they participated in Klimaforum09. Unlike the exclusive UN Conference, Klimaforum09 was open to everyone who wanted to attend. Alec and Katherine returned to the United States with a valuable “international vision” of climate change issues and a passionate resolve to address them. They began making plans immediately to attend the 2010 UN Climate Change Conference in Cancun, Mexico.

The couple envisioned a cross-country trip from Portland, Oregon, where they were living at the time, to Washington, D.C. Along the way, they would film a documentary about “local communities’ solutions to the climate crisis.” It was Katherine’s idea to bicycle, even though neither she nor Alec had long-distance bicycling experience.

Alec and Katherine embarked on their journey from Portland on August 17, 2010. Over the course of three months and over 3,000 miles, they conducted over sixty interviews with “grass roots to grass tops,” a wide range of climate change activists in all but one of the states Alec and Katherine passed through. Many of the solutions they discovered are documented on the trip’s website (www.solutionsrevolution.org). Projects ranged from a wind farm on the coast of Washington state, built by the nonprofit Coastal Community Action Program to benefit local residents in need, to promising work at Montana State University by professor Gary Strobel with a fungus capable of producing a type of biofuel called “mycodiesel,” to a presentation of the city of Chicago’s aggressive Climate Action Plan by the City’s Commissioner of the Department of the Environment, to a farm in downtown Detroit created to enrich the lives of students at the Catherine Ferguson Academy for pregnant teens.

As they crossed the country, Alec and Katherine accrued a small entourage. Malkolm Boothroyd, an 18-year-old Canadian from Whitehorse, Yukon, biked from Anchorage, Alaska to join Alec and Katherine in Glacier Park, Montana. Paul Thompson, a teacher and climate change activist from Edina, came on in Minneapolis as support crew and driver of a Toyota Prius “sagwagon.” Don “Peace Rider” Ross, a peace activist from Fairbanks, Alaska, joined up in Chicago.

Reaching Washington, D.C. in November 2010, the climate change activists entered a political atmosphere where the issue of climate change was overshadowed by the recent midterm elections that ushered a Republican majority into the House of Representatives, and by the failure of the still-seated Democratically-ruled Congress to pass the American Clean Energy and Security Act (Waxman-Markey Bill). Interviewing politicians or staffers from twenty Congressional offices, Alec and his crew lobbied for concrete and timely efforts to address their environmental concerns. Alec describes the experience as “disheartening but empowering.” Disheartening because he observed a situation where “neither side of Congress was taking the initiative” to introduce or support comprehensive climate change legislation. Empowering because through interviews conducted in many politicians’ offices, Alec “found his voice and learned how to speak up.”

The last leg of the journey comprised travel to Cancun by bus and plane. There, Alec and Katherine again participated in Klimaforum10. Along with Paul Thompson they also served as delegates to the UN Conference, representing the Will Steger Foundation of Minnesota.

Alec feels the talks in Cancun were less organized than the ones in Copenhagen. Meeting locations were geographically dispersed which prevented the type of massive civic assemblies that focused international attention on Copenhagen. The absence of mass protests at Cancun, says Alec, may have “lessened the pressure on the UN talks” and conveyed the “detrimental message” that “the climate change movement is becoming more fragmented.” He identifies another shortcoming of the UN talks as the mandate that any binding resolution must be unanimously endorsed by all participating nations. Although the Cancun talks failed to produce the leadership and progress necessary to mitigate climate change in the near term, Alec notes that these talks represent the only truly global effort underway. It’s crucial that this effort be sustained as it will be at this year’s talks in Durban, South Africa.

Back home in Minneapolis, Alec is maintaining a local focus. He’s working for his family’s business, Heartland Inc., and inspiring others by speaking about his journey with Paul Thompson. Alec is looking for help to produce the documentary while trying to blend his artistic creativity with a passionate desire to avert the climate crisis. (See Alec’s artwork at www.alecneal.com).

Sarah Sponheim lives with her family in ECCO.