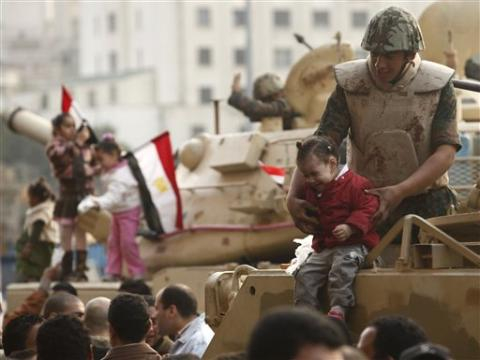 As an effete, sheltered, well-fed American I joined Egypt’s revolution from the comfort of my dining room. Between my daughter’s violin practice, the maintenance of dogs and cats and family meal preparations, I have been unable to turn away from my MacBook’s screen; it’s now, my cyber barricade. Curiosity peaked for me last Thursday, as reports came in that the protests had spread from Alexandria and Cairo to Suez, Luxor and a host of cities I’ve only read about in pharaoh stories. And it’s hold is unabated.

Images of events from the Cairo Bridge, hooked me and I silently vowed to be an unwavering witness to this people’s movement. Steadfast stoicism galvanize Cairo protesters. They chose not to retreat. They prayed. They took sprays from water cannons. It was reported that Coptic Christians stood guard to protect the protesters as they responded to the call to prayer. Which is so moving, considering that only days earlier they celebrated the orthodox Christmas under threats of violence. And those who gathered on the bridge were run down by riot police personnel vehicles.

But they did not blink. They were not moved. This iconic imagery shares its symbolism with Bloody Sunday and our nation’s civil rights movement. As a prayerful, religious person I was swayed to the side of the protesters as they practiced a nonviolent protest and eventually won the right to march across the Cairo bridge. I wonder, how will the efforts in recent days combat patented disenfranchisement of dissenting voices from the Egyptian government?

Like African Americans and their supporters did in this country some forty-six years ago, Egyptians have come out over the past eight days to demand to have a voice in the running of their country. And, like many middle-class microbloggers on Twitter I was horrified to learn, while watching media coverage from the demonstrations, that the protesters held empty tear gas canisters bearing labels “Made in the USA”. One blogger and twitter personality from NYC, @blogdiva said: “well, I guess we’ve found USA’s remaining export biz…it’s a gas”. Today, I read US Senator and former presidential candidates John Kerry’s Op-Ed in the New York Times, where he echos our unified dismay at the use of tear gas in quelling demonstrators.

President Hosni Mubarak sacked his entire cabinet last Friday. And my like-minded cynics on the web guffawed at this gesture. Saturday, Mubarak named Omar Suleiman as Egypt’s new Vice President. Just like Mubarak once was to Anwaar Sadat. Then Sadat was assassinated. Mubarak’s been president for more than 3 decades. More tisk-tisks came from the literati and Middle-East pundits because he is Egypt’s head of intelligence. Gasp. Cue the foreboding music. One word: rendition. You can learn more about Suleiman here. Yes, Virginia, Suleiman is OUR boogie man incarnate in the war on terror.

From my secure location some 9991 kilometers or 6210 miles from events on the streets of Cairo, Egypt I am vexed because I cannot point my magic remote control to casually watch rioting unfold via Al Jazeera English or Al Arabiya from the couch! Those networks are not carried by Comcast. Nor Dish Network. Why? Our Twin Cities community is very diverse and well represented by ex-pats from the Middle East region. Surely, the number of immigrants from northern Africa alone would support AJE’s addition. I think I remember watching AJE during a medical procedure at Mayo Clinic. And that it’s offered for guests at the Kahler Grand Hotel. But I was also on pain medication, so, that’s a hazy recollection.

When Tianemen Square moments were appearing like wild-fire across Egypt last Friday, I noted bizarre connection problems to the internet. Twitter wasn’t allowing me to post information when the messages contained “protest”, “Egypt”, “Cairo”, etc. As I watched Al Jazeera’s coverage my web browser, Firefox would launch pop-up security alerts to tell me that the media could not be verified and that it might contain harmful data and or damage my computer.

Say what? I went to the web to report these anomalies, and several people, from NYC to SFO confirmed: they were having the same warning messages crop up in Firefox, to being bounced from AJE’s website or not being able load AJE‘s url. As the Egyptian government shut down their country’s access to the internet, I began to wonder, could they be pinging any Twitter account mentioning events in Egypt? Especially, a close ally of the US? Thanks to WikiLeaks and my insufferable curiosity of the stolen cables, I know that Twitter released my Twitter ID to US law enforcement. @WikiLeaks, others shared that US diplomats have known about the growing unrest in the land of Pyramids. You can learn more about Bush-era and President Barack Obama diplomatic secrets here. But I leave that piece of conspiracy snausage to be answered by sage, net-neutrality gurus.

Moreover, what’s the point? Why am I staying up late, night after night to see the dawning sun rise over the Nile, pictured on my over-heated Mac? Why would I frantically seek host sites carrying live video from Egypt? Because we’ve got cousins there. Yeah, philosophical ‘one world -man, infinite in faculties…express and admirable’ but also, born in America, lived in Minnesota and now living abroad in Cairo kinfolk! My peeps abroad are women. They are educated, engaged, brilliant members of my husband’s family. And I’ve been very worried about them. It is they who told me how ‘laughable’ voting in Egypt was, “I’m not wasting my time with that nonsense,” my cousin said last November. I haven’t shared direct tweets or Facebook posts with family in Egypt since Saturday. But it was last reported that @NadiaE ‘s home safe…after protesting, being tear-gassed and shot at, she’s safe at home.

Please pray with me for continued peaceful protests across Egypt, here at home and around the world.