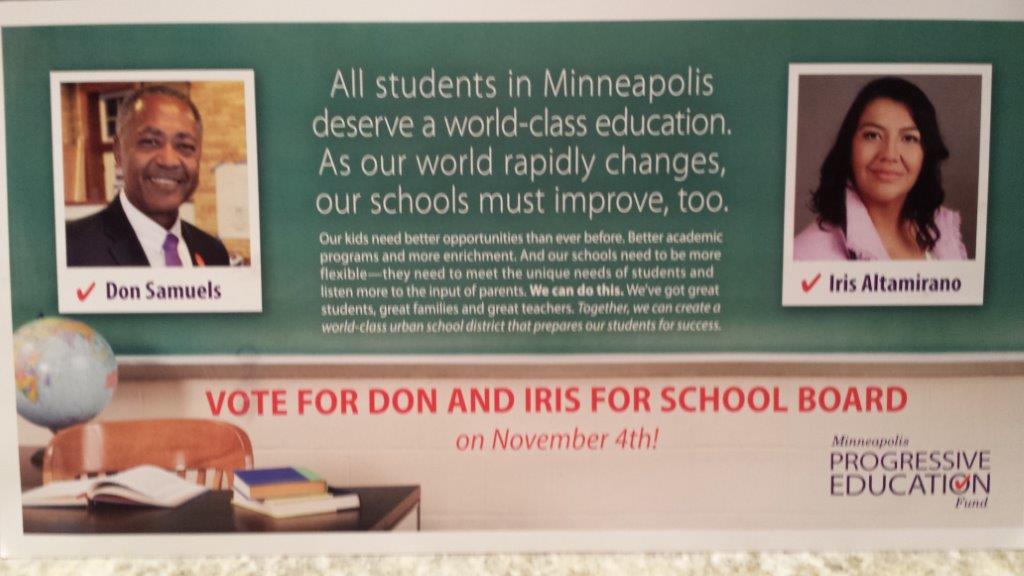 I could be wrong. If I’m right, then I have to admire the cleverness of a certain group of Don Samuels’ supporters, even if, as the title implies, there’s something coldblooded about it.

A new organization has sprung up for this election season, the Minneapolis Progressive Education Fund. They put out a mailer promoting the candidacies of Don Samuels and Iris Altamirano for the Minneapolis at-large school board seats. Altamirano is one of the candidates endorsed by the DFL. Samuels is not. The other DFL endorsee is Rebecca Gagnon. Voters might be fooled by the effort MPED is making to hook together Altamirano and Samuels. The images below are a mailer MPED sent Minneapolis voters (click to enlarge). Some voters have received a robocall supporting Samuels and Altamirano while bashing Gagnon. I didn’t receive one myself and don’t know of anyone who caught who made the calls, but the content sounds roughly the same as the MPED web site. The mailer is positive about the supported candidates, but the robocall and web site are pretty negative. The web site tries to tie Gagnon to the unproven rumors about State Sens. Bobby Joe Champion and Jeff Hayden. Pretty nonsensical rumors unless someone believes the senators are politically suicidal (denying funding to the Minneapolis public schools? Remember that saying about extraordinary claims…), but MPED says, “The Star Tribune and MinnPost also have reported on claims…” and yes, someone made claims, those outlets reported that someone made claims, so true as far as it goes. Other than that attack on Gagnon, it’s all generic “every child can learn” sort of stuff said by all school board candidates everywhere. 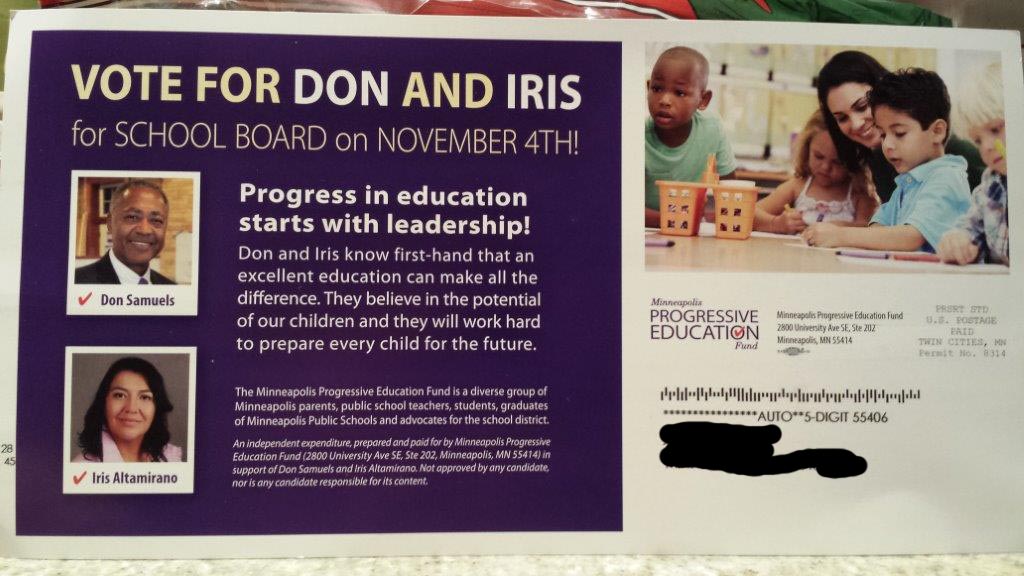 So what’s the strategy? It’s more than knowing the word “progressive” plays well in Minneapolis. The trick is Samuels doesn’t need to beat both endorsees. Since there are two positions, he just needs to beat one. Apparently the strategy is to hook him to one endorsee, giving the impression he’s the other endorsee, while simultaneously hitting the other endorsee with a negative campaign. That may explain why Samuels didn’t seek the DFL endorsement, which he never would have gotten for any public office, but instead attempted the same sort of ambush campaign Matt Entenza tried in the auditor primary: keep quiet until filing so opponents aren’t expecting anything, and then hit hard with a well-funded negative campaign. The brilliance of this strategy is it would have worked equally well whichever candidate MPED chose to support or attack. Whether there was a reason or a coin flip, MPED chose to make it appear Samuels is running with Altamirano, even though they’re not similar candidates, and I’ve yet to hear anyone in Altamirano’s campaign have a good word to say about him.

Who is MPED? All they say, on the mailer and on their web site, is, “The Minneapolis Progressive Education Fund is a nonprofit organization committed to the betterment of our community’s public schools. We are a diverse group of Minneapolis parents, public school teachers, students, graduates of Minneapolis Public Schools and advocates for the school district.” So some parents and teachers got together and afforded the professional web, direct mail, and robocalls? I suppose that’s possible. Samuels supporters have complained about Altamirano and Gagnon benefiting from the money and efforts of the teacher’s union and the DFL, but at least everyone knows who they are and where the money comes from. Maybe MPED really isn’t really astroturf, but has anyone ever seen a grassroots group not seeking donations? Seriously, the web site has no “donate” button.

I’m not interested in bashing Don Samuels on a personal level. He seems like a nice enough person, and I’m sure he has some individual qualities. I don’t appreciate how he’s gone about his campaign, though I’ll also admit it isn’t just about the school board. I didn’t support him for mayor last year, and I doubt I would have supported him had he run again for city council. When I’ve heard him speak, he didn’t have anything to say beyond platitudes. Supporters are free to say I didn’t hear him at the right times. That’s certainly possible. The people who told me he ran for mayor because he couldn’t have won his ward were speaking their own opinions. I’ve no reason to disbelieve them, but just acknowledging the sample size is small. Recently Samuels got some bad press for calling the police on NOC (Neighborhoods Organizing for Change) when they were giving away hot dogs and asking people to pledge to vote this election day. They were doing this in front of their own office. He said he thought someone was operating an illegal business, that he didn’t know it was NOC, that he supports them and even doorknocked with them. I entirely believe him. I see no reason to believe there was malicious intent. It’s just that this is the sort of thing he sometimes does.

Just to be clear, don’t infer that everyone who supports Samuels is part of MPED. Quite the contrary, it appears to be a small group, so I make no assumption it speaks for all of his supporters.

Even if I agreed with Samuels on every issue (and I do agree with him that teachers are underpaid), I would be nervous about having him back in public office. We’d survive obviously, there would still be public schools, but I’d like to do better than that. There were good reasons Altamirano and Gagnon won the DFL endorsement. Even if someone dislikes endorsements for non-partisan offices, and there’s a case to be made, do think about why they got endorsed. We have two really smart and dedicated endorsees who had to impress a lot of people who know their stuff on education policy and the Minneapolis public schools. I suggest visiting their web sites, and not just listening to what MPED has to say:

Some voluntary disclosure: I’m the chair of the DFL of SD63, part of which is a portion of Minneapolis. I speak only for myself when blogging, but I want to be upfront that I have this other position. As a DFL officer, even though it’s just at the local level, I’m obligated to support the party’s endorsees, at least insofar as not supporting their opponents. Readers will decide whether to take my word for it that I would think the endorsees are the best candidates anyway, but consider whether I would have taken the time to write this, to carry their campaign lit door to door, to donate from my limited funds, were my support purely obligatory. I could have just just refrained from saying “support Don Samuels” and been done with it.