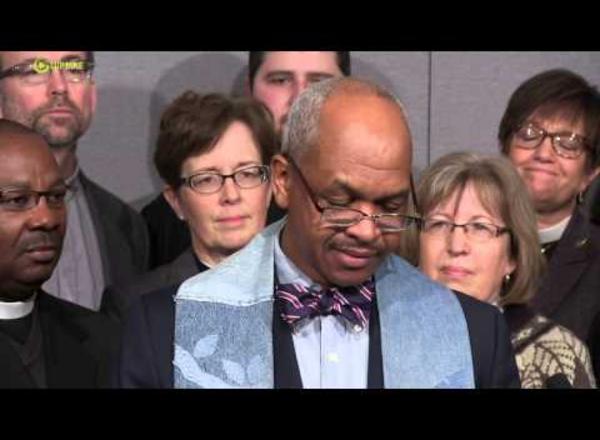 Minnesota’s battle over voter photo ID may be over, but it’s not forgotten. In 2012 Republicans put a constitutional amendment on Minnesota’s general election ballot barring citizens without a photo ID from voting. It was defeated. Reverend Paul Slack says voter photo ID is just one of many ways those who control the reins of power are trying to prevent more people from voting.

One of those “practices” Slack and his coalition of religious leaders are fighting is preventing felons from voting even after they have been released on parole, something that disproportionately disenfranchises black and poor voters.

“African-Americans have not been treated with dignity. When it comes to blacks, America and the state of Minnesota has revoked our right rather than to defend it,” said Slack, apparently referencing not just police violence against blacks, but also the prosecution of those who are speaking out against that violence. Organizers of a peaceful “Black Lives Matter” protest at the Mall of America in Bloomington, MN, face an array of misdemeanor charges, including public nuisance, trespassing and disorderly conduct. The City of Bloomington has said it wants demonstrators to pay for the overtime the city spent for police to be at the mall.

An agenda beyond voting

Beyond asking the legislature to restore the voting rights of those no longer in prison, the coalition of religious leaders also wants: