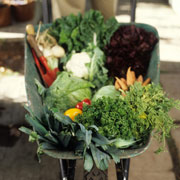 A fairly quiet trade agreement has been reached with Europe that should inspire economic development thinking on the part of Minnesota’s organic farmers and their friends within the state’s food co-op network.

The agreement, reached on Feb. 15 in Nuremberg, Germany, statesthat the United States and European Union agree to recognize each other’s certification programs for organic foods. The intent is to ease regulatory burdens for international trade. The U.S. and EU are the major global markets for organic foods.

In a USDA blog on Wednesday, Agriculture Deputy Secretary Kathleen Merrigan noted that the Agriculture Department launched its “USDA Organic” seal for organically produced foods 10 years ago under the department’s National Organic Program (NOP). In that time, organic food sales have quadrupled from $6.1 billion to about $27 billion.

Here’s how all this relates to Minnesota:

Most producers of organic foods in Minnesota are focused on supplying local and statewide markets. Several such farmers are part of a co-op that has gone national (Organic Valley), but most of this emerging food industry is close to home.

By clearing the way for trade with Europe, on top of an existing agreement with Canada, economies of scale have changed. There is real growth potential to develop a food industry for organic food products in Minnesota that would parallel the huge food and ag sector based in the state that already reaches all corners of the earth.