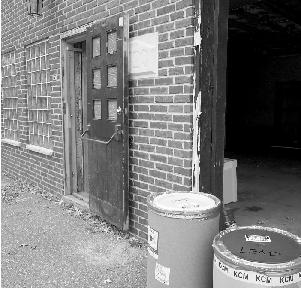 Outside the shop building at 45th and Humboldt, that at one time was a gas station, according to county officials. (Photos by Margo Ashmore)

Not as fun as the vision meetings, but just as necessary; about as many residents as officials gathered Friday morning in the former shop behind 1423 45th Ave. NE, part of the new Webber Library site. Informing the public of the impending demolition of buildings there, it was part of the checklist needed to get the city permits. Once those are issued, it could be a week or two to finish the job.

Hennepin County Libraries have designated an architect, Mohammed Lawal of Lawal Scott Erickson Architects. He designed both the Sumner and North Regional Library renovations. And they’ve issued a Request for Interest looking for an entity that might be interested in purchasing and redeveloping the former Kowalski’s site next door, and might even manage the library construction.

There’s an opportunity for potential developers to tour the former Kowalski building Oct. 21, proposals due Nov. 21. Those interested in the Oct. 21 9-11 a.m. tour should call Oliver Smith at 612-348-9812 to RSVP or email oliver.smith@hennepin.us.

Better Futures Minnesota has already gutted the inside of the 1423 45th Ave. duplex, harvesting for re-use the fixtures and trim. Other house parts are recyclable and have been hauled away for sorting; they estimate that there will be only one to two dumpsters going to a landfill rather than the usual 10.

What remains: They can take shingles and tar paper for recycling. They also want to salvage the old growth Douglas fir framing common in homes of this era.

Better Futures Minnesota has grant funding to work with hard-to-employ individuals for training and experience. Nitti Rolloff Services will finish the demolition after salvaging.

Tim Morphew of Nitti said they also are mindful of recycling potential: For example, concrete blocks and slabs can be offered to companies needing Class 5 road base. They don’t pay for it, but they grind up the concrete and keep it out of the landfills.

Morphew said the brick facing and walls in the back yard are hollow, recent work which would not stand up like the solid

Chicago bricks that can often be salvaged.

Neighbors were happy with assurances that demolition work wouldn’t start before dawn and would be done before dark, and that dust would be controlled. One woman wondered if her granddaughter’s bus stop would be affected.

Greg Moore, Project Manager for Hennepin County, said for now, they would not touch any of the random trees on the site, if mature and in good health. He identified one that seemed in questionable health, and said there is a lot of vegetation growing into the old fencing, that will be removed.

Next, on the site

Future plans might call for taking out trees if they or their roots are too much in the path of the new building. At the Northeast Library, the wood from an old oak, already failing, was salvaged to make some furniture for the new library.

When done, the site will have been backfilled with dirt and seeded for grass. Power lines and poles will be relocated. A testing company has done Phase One environmental work (examining past uses through public records). At one time, the garage building was a service station. 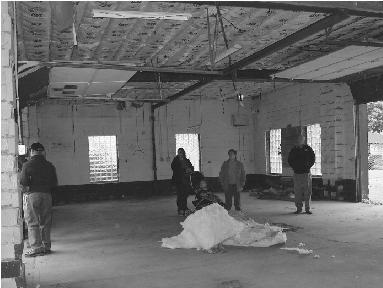 Hennepin County’s Department of Environmental Services will be doing soil borings and analysis, also observing to make sure the backfilling is done correctly. The site will be surrounded by new chain link fence.

Left: Inside the shop building at 45th and Humboldt

According to the library project website, “pre-design work to plan the new Webber Park Library is ongoing. Community meetings for the preliminary design phases of the project will be scheduled later in the fall. A grand opening celebration is tentatively planned for spring 2017.”

Why didn’t the library just build on the 4414 Humboldt site, the old Kowalski’s? Because it’s not on Victory Memorial Parkway, where the County wanted it. The Request for Interest (RFI) stipulates that the amount of surplus land available might change with the library’s design, and parking may be shared.

“Respondents will be invited to present their concepts to a community open house in early December 2014,” the RFI states. The document explains that zoning is C2, “established to provide an environment of retail sales and commercial space that are larger in scale than allowed in the C-1 district…The City of Minneapolis licenses a variety of business types, some of which have geographic considerations. The property does not meet the minimum requirements for liquor stores, small-scale breweries and tap rooms, or bars. The following is a partial list of businesses types that meet city license location requirements for the property: Daycare, restaurant with a charter wine and beer license, coffee shop, grocery store,” and general retail or market garden not subject to a license. Proposers were referred to get more complete license information through the city.