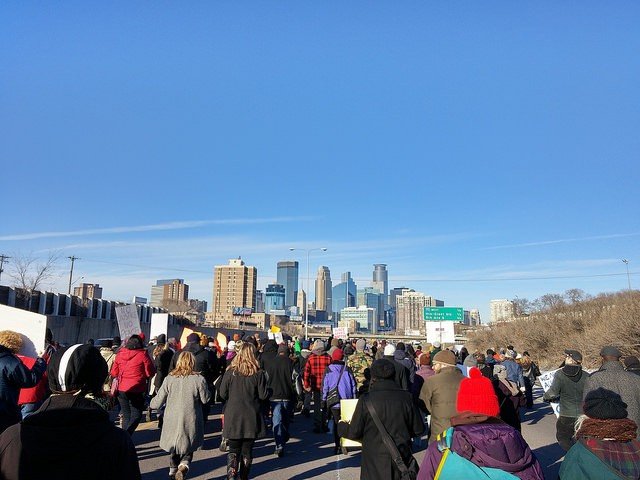 This is licensed under a Creative Commons Attribution License. Photo by Fibonacci Blue.

2014 was a year of outrage. With national protests led by communities of color in cities all over the country, there has been a palpable urgency demanding an end to the status quo. Incidents like the death of Michael Brown or Eric Garner or racist team names or institutional disparities are nothing new. It wasn’t the fact of racism that marginalized voices grew in sonancy, it was the organizing and leadership in response to recent incidents that reached a fever pitch.

Is it possible, as we float into 2015, 50 years after the Selma to Montgomery marches that led to the Voting Rights Act of 1965 and also the year that Malcolm X was assassinated, that we are entering into a new Civil Rights Era?

In the Twin Cities we saw these voices rise in powerful actions such as shutting down 35W, a large-scale protest at the Mall of America, a protest at a football game that drew thousands of people and even a packed City Council meeting demanding our local leaders follow through on the promise of racial equity.

These dramatic moments inspired conversations online and in print and most importantly in personal conversations with family members and friends and acquaintances. Conversations about structural racism leaked out of academia and into the mainstream. There were conversations about privilege and how it’s not a personal choice and you can’t simply give it up like giving up meat or choosing to purchase environmentally friendly fabric softener. And how it’s not enough to simply be aware, to be enlightened about your privilege but you have to be a good ally. And you have to learn how to check your privilege and listen to ways you can actually be helpful.

At times when you are having these conversations it feels like you’re making progress and at other times it doesn’t seem that way at all. And still our schools are failing students of color and still we have disparities in our justice system and in housing and it can get to be overwhelming.