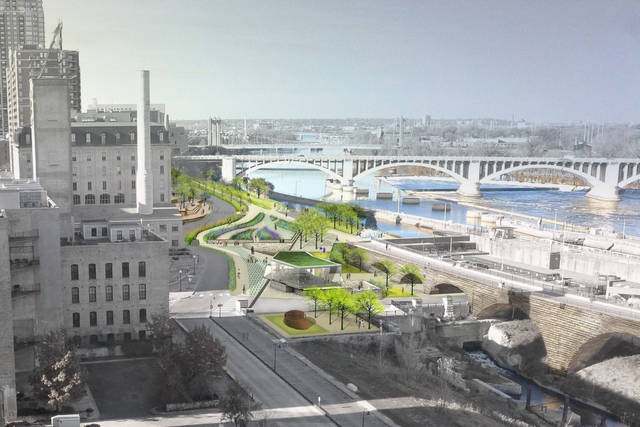 The Mississippi River defines the Twin Cities, winding alongside downtown Minneapolis and cutting through the University of Minnesota campus.

The Minneapolis Parks Foundation is aiming to redefine the city’s relationship with the riverfront over the next 20 years, starting with building an immersive waterfront park in the heart of the city, about a mile upriver from campus.

The Minneapolis Parks Foundation, in cooperation with the Minneapolis Park and Recreation Board, has commissioned architects to redesign the waterfront area adjacent to the West River Parkway overlooking St. Anthony Falls. A rough draft of the design was presented to community members last month, and the design team is working to build a 3D model to present in April.

This area, called Water Works, is a priority project of RiverFirst, a 20-year vision for the Mississippi riverfront area. The initiative looks to revamp the 5.5-mile waterfront from Interstate 35W to the Plymouth Avenue Bridge with parks and paths to create a greater sense of community. The Water Works plan will come before the park board in August with the hopes of breaking ground in the next year.

“As remarkable as the waterfront is now, it’s a place where you go, park and then leave,” said Kate Orff, design team member and partner at New York City-based SCAPE Landscape Architecture, which did the bulk of the design for the park. “We’re trying to give them more of an enriched experience.”

She said the park would be a way to make the area more of a destination, rather than a stopping point.

MPRB Assistant Superintendent for Planning Bruce Chamberlain said the RiverFirst initiative as a whole would attempt to reconnect the downtown area with the waterfront to increase livability and community within the city.

“The river is the primary focus of reinvestment in Minneapolis, and it’s expected to be for the next couple of decades,” he said.

Executive Director of the Minneapolis Parks Foundation Mary deLaittre said parks are the tools to create healthy, vibrant cities that can compete locally, nationally and internationally.

The design team, made up of people from SCAPE, Rogers Partners, James Lima Planning + Development and SRF Consulting Group Inc. made the Mississippi River waterfront the main focus of their concept for the park.

Orff said that because of the unique way that Minneapolis connects with the Mississippi River, there is potential to create an engaging and immersive park experience.

“We are trying to capture what is uniquely Minneapolis,” she said. “We don’t want to make a generic waterfront park but rather build a design that captures the unique ecology, the unmatched historical resources and the way that people are using the river for active recreation and pleasure.”

Orff said SCAPE has significant experience with projects like this, having designed large-scale urban parks in Lexington, Ky., and New York City, focused on redefining the relationship between cities and water.

Community members are excited about the project and have given useful feedback about the design concepts that the design team has taken into account, Orff said. She said that she hopes the park will go beyond simply engaging residents who live near the area.

“It’s a park for all of Minneapolis,” she said.