Dinkytown, the four-block business district on the north edge of the University of Minnesota in Southeast Minneapolis, could continue to be taken over by six-story mixed-use apartment buildings or it could be “frozen in place” by historic preservation. Between these two extremes, there is much room for planning, says Peter Crandall, designer for the Minneapolis Community Planning and Economic Development department.

Crandall and the city’s principal planner Haila Maze joined several stakeholders and experts to discuss “Growth with Preservation” on June 23 at the Loring Café in Dinkytown. The forum came while city planners continue to study whether the small business district should be declared a historic site.

“We’re aware that there’s a lot of development already going on,” Crandall said, adding that planning can make a difference.

Crandall showed relief drawings that illustrated the look and scale of different planning options, including the current buildings, the same four blocks filled with six-story apartment buildings and other design options that allowed for different mixes of designs and heights.

Design guidelines could also ask architects to retain the current street-level experience, even as they increase density behind and above current buildings, he said.

About 50 people attended the meeting that began with a review of issues involved in determining how the area will grow and what will be preserved. Participants seemed to agree with Maze that the vibrant culture of Dinkytown is more important than the buildings.

Major historic themes associated with Dinkytown, Maze said, were the streetcar era, the university connection, the commercial center, and issue of change and continuity.

From the 1880s through the 1920s – the heyday of streetcars – Dinkytown was a hub. “The site of the Loring Café – where we are meeting now – was a car barn for the Minneapolis Street Railway Company,” she said.

“None of the current buildings was here then,” Maze said. A few commercial businesses were on 14th Avenue Southeast surrounded by largely residential property, nearly all one- to three-story buildings. “The University of Minnesota grew with Dinkytown since the 1860s. The Dinkydale building was built around 1900 for student housing with a ground-floor café. Sound familiar?”

After World War II, Dinkytown grew as a commercial hub with the arrival of franchises, including McDonald’s that remains. Students protested against Bridgeman and McDonald’s, which were built, and the Red Barn, which was not. It also became a campus hangout and a center of the counterculture for antiwar demonstrations during the 1960s.

New buildings came to Dinkytown throughout its history, Maze said, The only decade without a building represented is the 1930s during the Depression which saw little new construction. Twenty-one of the core structures were built before 1950. 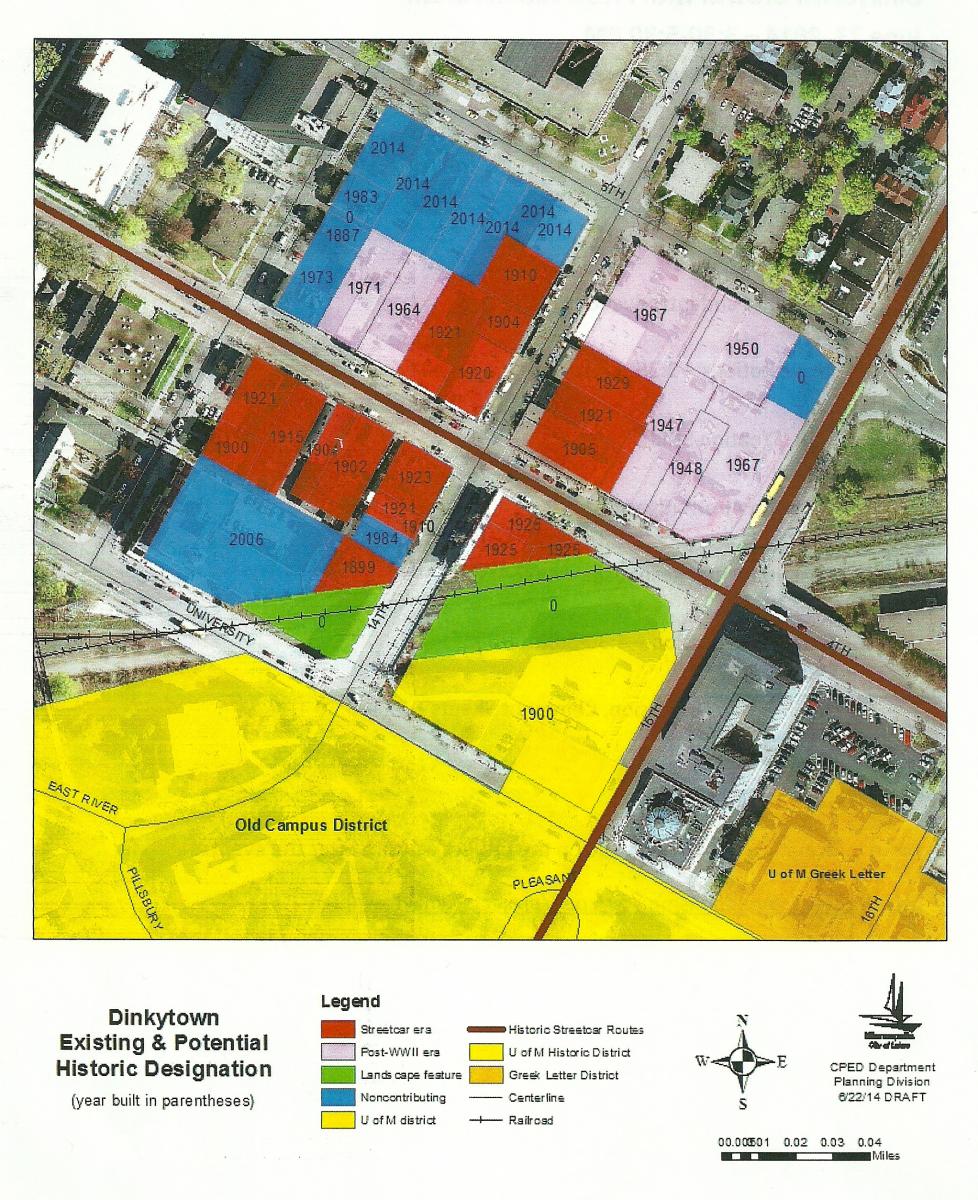 A map provided by Minneapolis planner Haila Maze shows Dinkytown’s historic character: the yellow area shows portions of the University campus; red is from the streetcar era before World War II, pink from the post-World War II and the blue indicates recent properties that have no historic or architectural distinction.

Kelly Doran, head of the diversified real estate company that bears his name and who owns several apartment buildings in the Marcy-Holmes neighborhood, said historic preservation could hinder development.

Doran, whose plan to demolish two Dinkytown buildings for a proposed hotel was nixed by the City Council, said developers need predictability. “It costs a lot of money to propose a development project. Hundreds of thousands of dollars could be spent just proposing a development.”

“It’s very difficult economically to remove a single–story building. In most cases, you have to triple the size of a structure to justify the economics of removing the building … underground parking is even more expensive,” Doran said. “Many of these buildings will require massive investment if they turn over.”

Bringing buildings up to code and making them accessible under the requirements of the Americans with Disabilities Act will be expensive, even without further complications of historic preservation, Doran said.

Chris Hartnett, a member of the Minneapolis HPC since November, said the HPC seeks to become proactive, rather than continuing to just react to proposed developments.

Minneapolis has an important history to consider. “It’s important to preserve and it’s also important to remain vibrant,” Hartnett said. “We need a balanced approach. When does a recommended change or addition help a community?”

“People like being in historical buildings and being in historic places. – people like this feel,” he said, indicating the Loring Café environment. “People want to be here and they’re willing to spend some money to be here. We’re close to downtown. We’re close to an LRT and a bus line. It’s worth more to be here. Because these old buildings are here, we work with them and improve on them. And make them more viable.” 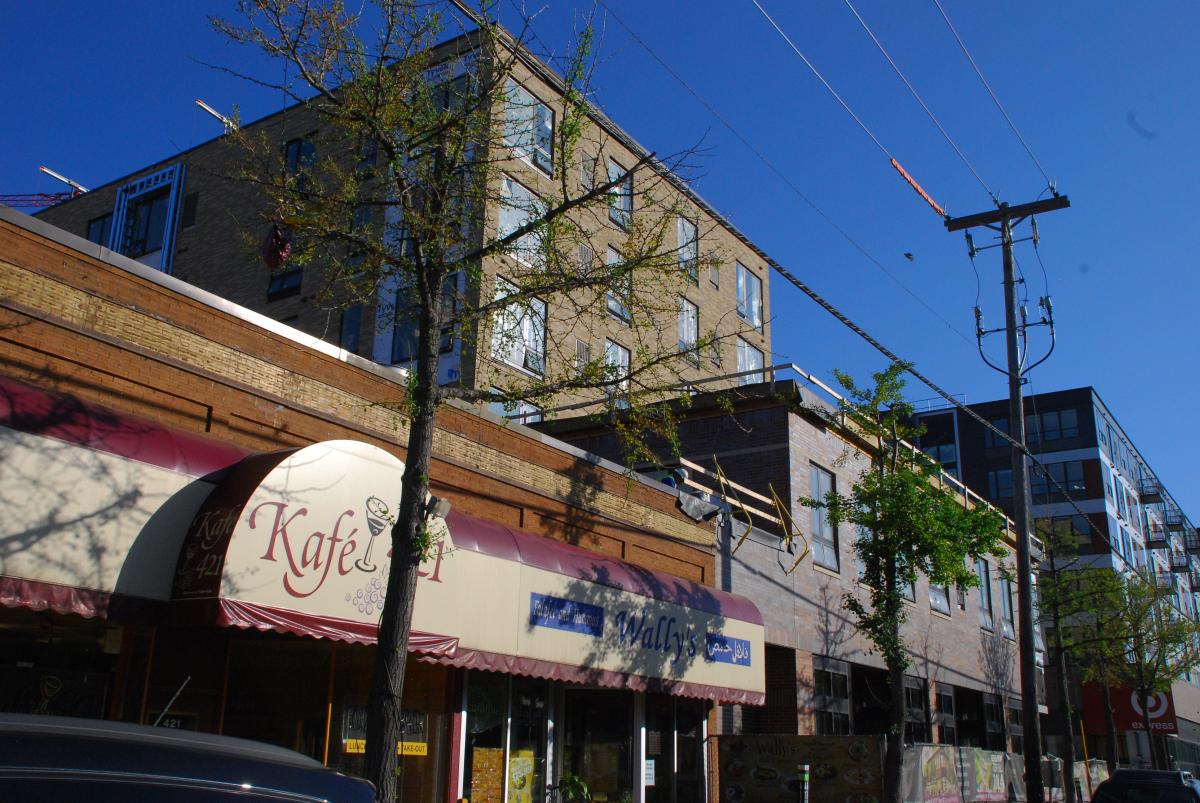 Planners say the streetscape can be preserved if the denser areas are set back from the storefronts at eye level on the street, as with the Venue mixed-use building in Dinkytown. (Photo by Bill Huntzicker)

In the past, Doran said, Dinkytown had a bakery and a butcher shop – product-based businesses – and now it’s mostly bars and restaurants – service businesses. The future may look different, Doran said.

Doran and Hartnett participated in a panel discussion with two others interested in Dinkytown: Cara Letofsky, president of Mill City Consulting, and Molly Patterson-Lundgren, a planner for WSB & Associates of Rochester.

“I don’t know whether it’s a good thing that Target is coming to Dinkytown. But Target could not come here if it did not have a new building. An Apple Store couldn’t come to Dinkytown. There’s no space for one,” Doran said, adding that planning should accommodate the next generation of businesses.

An audience member said she appreciates the smaller scale of the one-story buildings in Dinkytown as relief from the increasing number of tall buildings, and she complained that the planning options didn’t allow for height restrictions.

Maze said she would post her PowerPoint at the city’s planning site for Dinkytown at http://www.minneapolismn.gov/cped/projects/dinkytownplan. 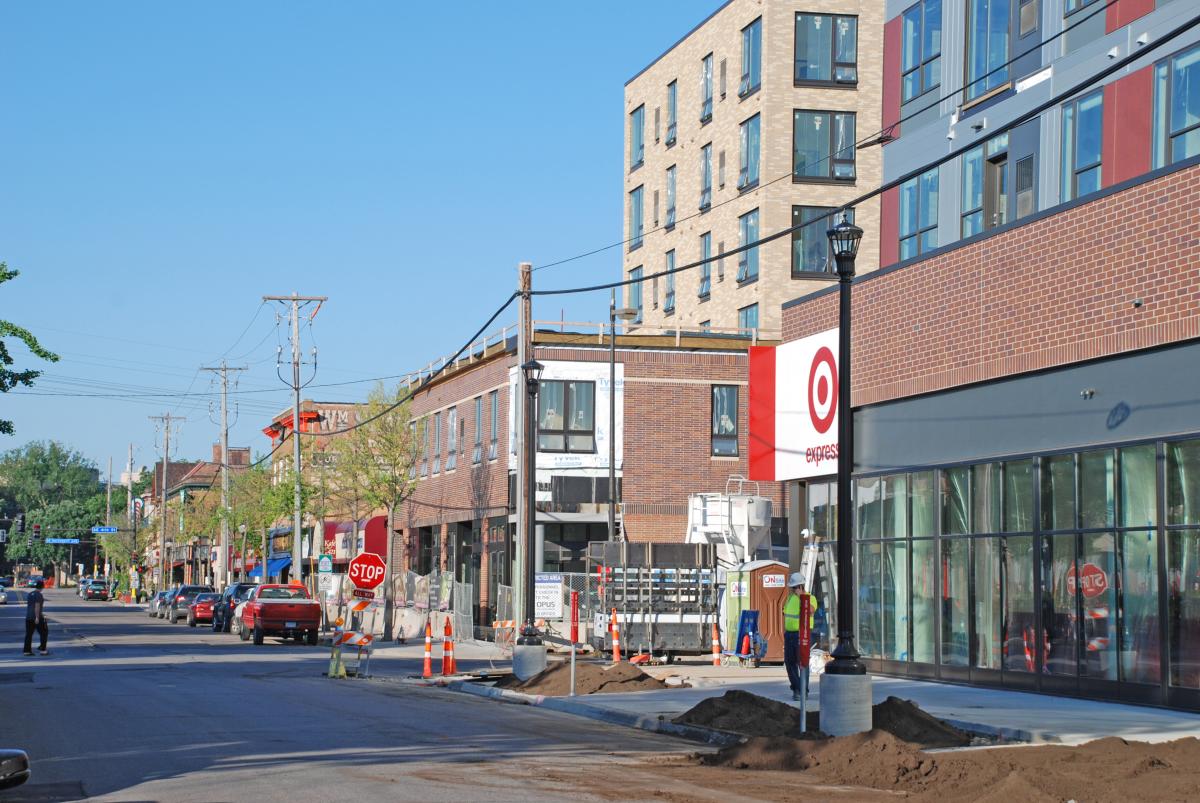 A developer says new businesses, like Target, would not be able to come to Dinkytown without new buildings, like the Marshall Apartments on the right. (Photo by Bill Huntzicker)