Minneapolis is weighing the option of taking public control of its utilities, similar to the way the University of Minnesota does. 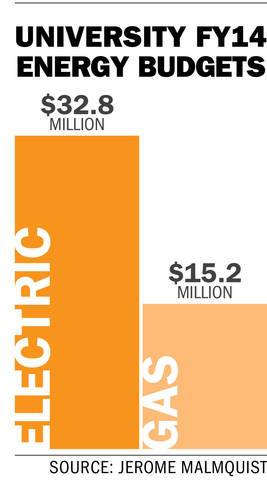 City leaders are looking into forming a public option for electrical and gas utilities by purchasing necessary infrastructure, but some question the plan’s feasibility.

The University already operates similarly to a municipal power utility by buying its energy from private companies and distributing it, which University Energy Management Director Jerome Malmquist said saves money and provides a more reliable system.

For the current fiscal year, the University budgeted about $48 million for electricity and gas. Malmquist said the University is responsible for the operation and distribution of nearly all its energy, including ownership of power lines and responsibility for maintenance.

The Minneapolis City Council will hold public hearings on August 1 to discuss the potential for publicly owned utilities and commission a $250,000 study in April from the Center for Energy and Environment to examine how a municipal power utility would work in Minneapolis and how much it could potentially cost.

If the city were to provide publicly owned utilities, it would also be responsible for maintenance. The University currently does most of its own maintenance work and has purchased and built necessary infrastructure like underground power cables and distribution centers, Malmquist said.

“It is very expensive to purchase, maintain and upgrade an electrical distribution system,” Malmquist said. “That is no small cost, and it takes a fleet of very talented people to do that.”

The University, one of the Xcel Energy’s largest customers in the state, would have to decide whether it would join the city or keep purchasing energy on its own.

Xcel Energy and CenterPoint Energy currently supply almost all of Minneapolis’ power. Both companies’ contracts with the city are up next year.

Minneapolis would need to purchase assets and facilities from the city’s power companies to provide a public energy option, which Xcel Regional Vice President Laura McCarten said could cost billions.

She said the City Council is giving itself momentum to change energy policy in a way that could negatively affect customers.

“It’s not just creating options, it’s directing the city on a course of action,” she said. “We don’t have the right to just say ‘No.’”

Los Angeles has the largest municipal power utility in the country. Many California cities built their own energy facilities when electricity was in its infancy, so it was cheaper than making a modern-day transition.

“There’s a growing consensus and desire to get away from coal,” said Ward 2 Councilman Cam Gordon, adding that his constituents have expressed a desire for more locally-generated energy.

McCarten said the city should instead work with private companies to achieve sustainability goals that are higher than current state regulations.

During recent storms in the Twin Cities, more than 600,000 Xcel customers experienced an electrical outage and the company deployed more than a thousand employees to restore their power, McCarten said.

Minneapolis’ power grid is connected to first-ring suburbs, she said, which would make reconfiguring the system “a hugely complex undertaking.”

But some legislators from the metropolitan area have proposed legislation that would make negotiating publicly owned utility options easier for cities.