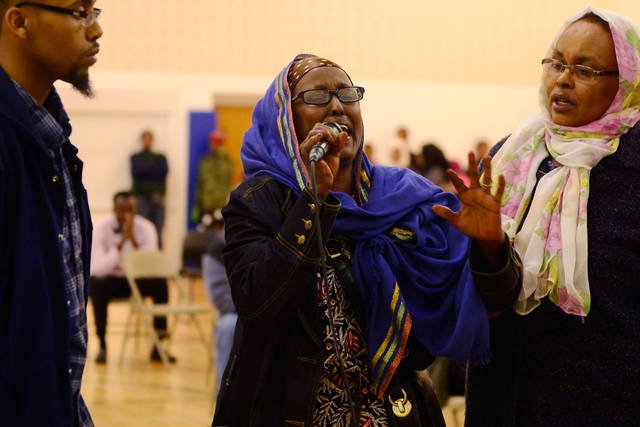 For two years, community members have voiced grievances ranging from broken elevators to feeling unsafe in their homes. Minneapolis officials documented the complaints for the first time on Friday and said they will begin assessing them soon.

Ward 6 City Councilman Abdi Warsame facilitated the session, while representatives from city offices, including the Department of Regulatory Services, documented the issues.

“The most important thing is that tenants feel like they aren’t being listened to, and they’re being taken for granted, even though they pay rent,” Warsame said.

Officials listened patiently as an interpreter translated each of the residents’ grievances, many of which were met with cheers and applause from the audience.

All of the complaints pointed to the apartment complex’s management company, Sherman Associates. Sherman Associates’ Director of Marketing and Communications Valerie Doleman said its representatives attended Friday’s meeting, but weren’t asked by the meeting’s facilitators to sit on the panel.

Some residents said they have seen the building’s security guards smoking marijuana in hallways or stairwells.

Doleman said those concerns haven’t been brought up between Sherman Associates and the Riverside Plaza Tenants’ Association in previous meetings, and they haven’t been formally reported.

She said the security guards are required to wear body cameras.

Warsame said it can be difficult for tenants to express their concerns to the management group because of the cultural divide that exists between residents and the building’s managers.

Sherman Associates is requiring extra sensitivity training for all of its Riverside employees this month.

Apartment employees are already required to undergo sensitivity training upon being hired as well as throughout the year, Doleman said.

Executive Director of the Confederation of Somali Community in Minnesota Mohamud Noor met with Sherman Associations and other community leaders late last month to produce a list of action items for the building’s management to improve.

He said he didn’t sign the agreement they were discussing because he felt the residents’ concerns of discrimination within the complex weren’t addressed appropriately.

Doleman said the sensitivity training is designed to discourage discrimination.

“The aim of this was not to be a negotiation between the owners,” Warsame said. “This was just to listen to the community and to understand their concerns.”

In 2012, Riverside Plaza completed a $132 million project that aimed to make the complex safer and more attractive. It was funded with both public and private money.

Sen. Kari Dziedzic, DFL-Minneapolis, said considering the state’s large contribution to the project, she plans to investigate how the money was spent.

The director of the city’s Department of Civil Rights, Velma Korbel — who attended Friday’s meeting — said the city’s next step is to analyze the complaints. From there, she said, she’ll decide what she and others can do for the tenants.