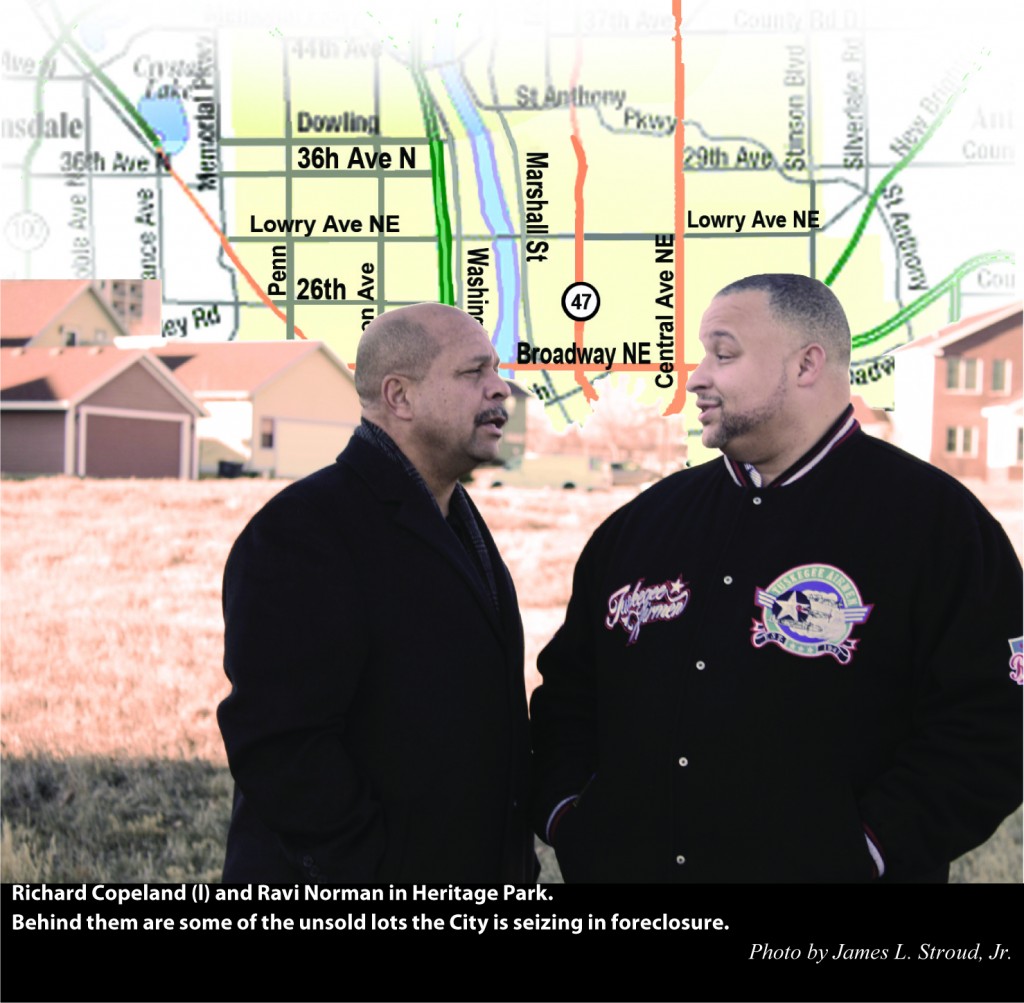 Is ‘Heritage Park fatigue’ causing City leaders to neglect the historic project? Or is a land grab underway?

The Minneapolis City Council recently voted to begin foreclosure proceedings against properties in North Minneapolis’ Heritage Park, once billed as the most ambitious housing start-ups in city history. A Black developer formerly praised by City officials for his investment in the project now worries that his losses may become someone else’s gain and the Black community will be the poorer for it.

Heritage Park, which is located on both sides of Olson Memorial Highway near downtown Minneapolis, replaced the former Northside public housing projects whose 1997 demolition came about after the 1992 Hollman  lawsuit.

“I was born in the projects, so I was fortunate to get the contract to tear them down,” recalled Thor Construction Chairman Richard Copeland. “We tore down 1,000 units.”

His company later joined a partnership to build 400 single-family homes “in four phases,” noted Copeland. It was “the largest mixed-income project in the history of Minneapolis. You couldn’t tell the difference from a Habitat [for Humanity] house and a $300,000 house,” he said.

The first two phases were completed in the mid-2000s. “We put up 100 houses before things [started] happening,” Copeland said. “The economy went bad four years ago. We were selling land for $50,000 or $100,000. People were buying rehabs and cheaper vacant lots.”

After one partner went bankrupt, “Thor stepped in and bought all the [remaining] partners out, and we took on the project,” continued Copeland. “We said we would finish it.”

Copeland said he began meeting with City officials four years ago hoping to renegotiate, “to lower the land prices so that we can be competitive…so we could sell the lots.” He wanted the City to put up $1.5 million along with his company’s $1.8 million to complete the project.

“We had builders ready to build and the money lined up. All we needed was a new contract with lower land prices,” Copeland said.

Thor CEO Ravi Norman added that they have “written off $1.6 million in unrecoverable losses in this development. We know that we are not going to make that money back. We are not making any profit on this deal. We are going to put up more money to get this done.”

However, the Minneapolis City Council last month decided it was time to move on. “This was not easy,” Councilman Don Samuels said of the foreclosure action. During a phone interview last week, he told the MSR, “It was a very painful decision, especially for me, because I fought for this for the last couple of years.”

Twin Cities new home construction last year was the second worst in a decade — only a two-percent increase in 2011, the Builders Association of the Twin Cities reported last week. Copeland and Norman said there are currently 59 unsold lots in the Heritage Park project.

Heritage Park spans an area from Humboldt Avenue on the west to I-94 east to 12th Avenue north and to Glenwood Avenue south — at least 145 acres of prime real estate. Despite its Northside location, with the Twins stadium nearby and talk of a new Vikings stadium in the area, the land now looks potentially very valuable as Copeland sees it.

“The land prices will skyrocket. Why all of a sudden did [the City] take the project back? Because they want that land. It is a plausible scenario,” said Copeland, who believes that he also got caught in the middle of city hall politics.

“They [City officials] often complained — they called it ‘Heritage Park fatigue,’ he said. “That’s code words for discrimination on the North Side. There are so many ways they don’t want the North Side to build up. They have their pet projects and politically there’s not the will to support [Black Northside development].”

Samuels, whose ward includes Heritage Park, concurred with Copeland that the “fatigue” term was often used by fellow council members, but he disagrees with Copeland’s interpretation. “It’s not just used for Heritage Park, but for any situation where the City invested a lot of resources,” Samuels said.

However, the council member admitted that others on the council challenged why his North Minneapolis ward should get preferential treatment over other areas, especially in these tough economic times. “I guess you can call it the comparison factor between the First Ward, Fifth Ward and Fourth Ward.

“All the other wards say, ‘What about us? They [Heritage Park] got those resources for six, seven years, and you are going to put more money into the North Side again?’ They saw Heritage Park as losing money,” said Samuels.

Copeland feels Samuels “doesn’t have the juice down in city hall. He’s too soft-spoken. He doesn’t understand economic development and how that helps eradicate crime and poverty.”

Copeland said the council’s foreclosure decision took him by surprise. “They [once] applauded us for hanging in there, paying the taxes every year on all that land,” he recalled. “They said, ‘Every other developer walked away — you guys hung in there. Thank you.’ That’s what they said three years ago. They went from applauding us to condemning us.

“I already lost two million dollars. We feel that we got sucker-punched by the City,” said Copeland. As a result, he now questions whether the City ever supported him, or even the North Side.

Samuels doesn’t agree with this view either. “The City is very conscious of the impact on the African American community from this action. We tried to make it work.”

“I think what happened,” said Norman, “is that [the City] looked at it…and said, ‘It’s more economically incentive to take [the land] back. They will do a new deal [with a new developer] that creates economic incentive for them and better economic sense for the City.

“What they are saying is that they don’t want to make an economic investment in this area, at least with a Black developer,” said Norman. He’s afraid that whoever takes over the Heritage project “will be a non-Black developer — they make money and the City makes more money.”

Goldstein said he doesn’t totally blame Copeland for what ultimately happened to Heritage Park. “This project suffered as a result of macroeconomic forces…the economy and the housing market,” he explained.

When asked for a timetable of the City’s foreclosure action, Assistant City Attorney Shelley Roe told the MSR last week, “We don’t have a specific schedule at this point, [but] we are starting the process. We prefer a voluntary procedure, because it is a shorter process.”

Copeland said of the process, “We will cooperate with the City.” Norman said he wants the Northside community to get involved in any future development plans for Heritage Park.

“We need to say, ‘There’s Black money already in this development. We want to ensure that there is a Black development team willing to take advantage of that. It doesn’t have to be Thor, but it should be a Black developer to build that. That’s what I want to see.

“I still feel that the approach to sustainable economic development in North Minneapolis is too fragmented,” said Norman, “and still based on secret relationships and privileged groups.” He strongly urged that community folk be involved and believes that if the North Side is to ever move forward economically, it must be “designed by us, our community, built by us…and provide economic opportunities and workforce by us.”