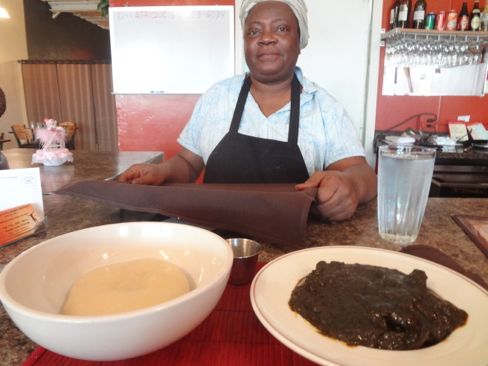 I first found out about City Afrique, the Liberian restaurant at 4326 Lyndale Ave. N. in north Minneapolis by reading Margo Ashmore’s excellent Northside News series on the north Minneapolis dining scene, recently republished in the Twin Cities Daily Planet. (See also Food Service from Glenwood to Broadway and Where does North Minneapolis go for night life?

We have an abundance of North African and East African restaurants in the Twin Cities, featuring the cuisines of Egypt, Algeria, Ethiopia, Somalia, Eritrea and even Djibouti, but West African restaurants have never really caught on, though a few have come and gone over the years. (There’s a small Ghanaian restaurant called Akwaaba hidden away behind an ethnic grocery at 1823 Nicollet Ave., but it seems to have very few customers.)

I thoroughly enjoyed my visits to City Afrique, but a word of warning seems to be in order: West African cuisine isn’t for everyone. Many of the dishes on the menu are stews ($11.99), and those that I sampled had thick intensely flavorful sauces and a distinctive mucilaginous texture – that’s a polite word for slimy.  The only dish in the American repertoire with a similar texture is authentic Creole gumbo, which makes sense because gumbo has West African roots. 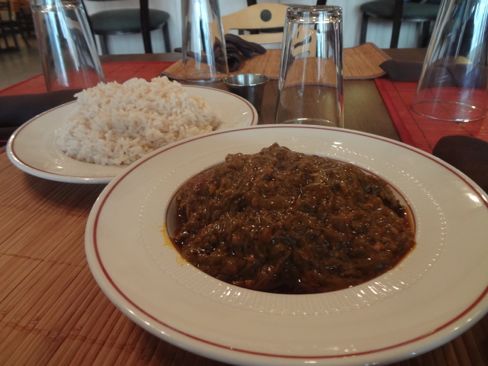 My okra stew was brimming with chunks of bone-in chicken and stewed beef, while the palava stew combined chicken with thick chunks of long-cooked fatty beef skin in a very dark sauce made from the leafs of the mulukhiyah (jute) plant. I can’t say that I enjoyed the beef skin — I didn’t eat much of it — but the sauce itself was delicious.

The stews are served with either steamed rice or fufu, which many may also find to be an aquired taste. Fufu is a rubbery white ball of starch, made from plantain or cassava (at City Afrique, it’s made from plantain). It’s customary to tear off a chunk of fufu and use it as a sop to soak up the sauce. 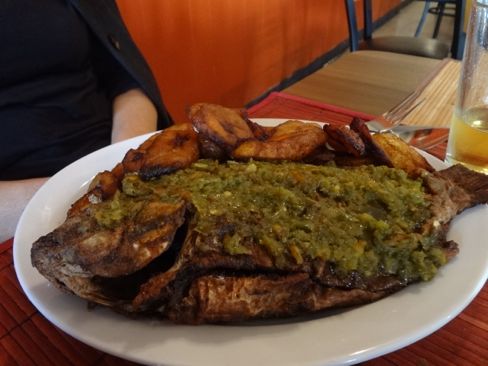 There isn’t much on the menu for vegetarians – nearly everything is prepared with beef and/or chicken. When Carol joined me on my most recent visit, about the only thing she could find to order was the fried fish ($12.99) – a whole tilapia topped with an onion and pepper sauce, and served with fried plantains. Neither of us was very enthusiastic about that dish, but I enjoyed my order of check rice with gravy — a big mound of rice flavored with jute leaves, and accompanied by a big bowl of chicken and fish in another savory onion-based sauce.

The very modest decor has a West African theme. I have made three lunchtime visits to City Afrique, and each time have been the only party in the dining room, though other customers did stopped in to pick up takeout orders. City Afrique may draw a bigger crowd on weekends, when chef Bea Karngar prepares a couple of special cassava dishes — dumboy (“a classic thick paste-like mash made from boiled cassava“) and GB (“a courser, less gooey, more flavorful version of dumboy.”)

Service is very friendly and attentive. Wine and beer are available. 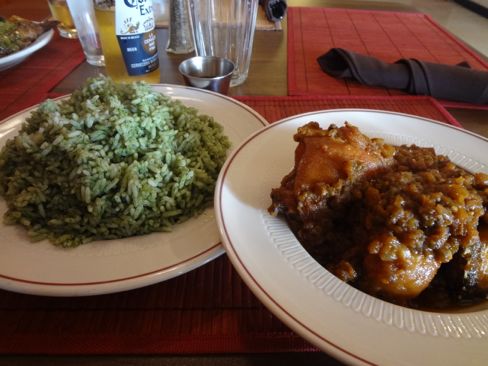 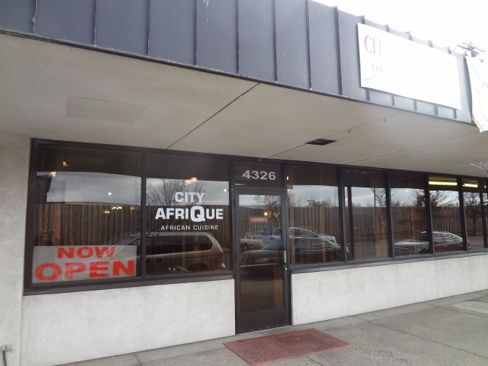