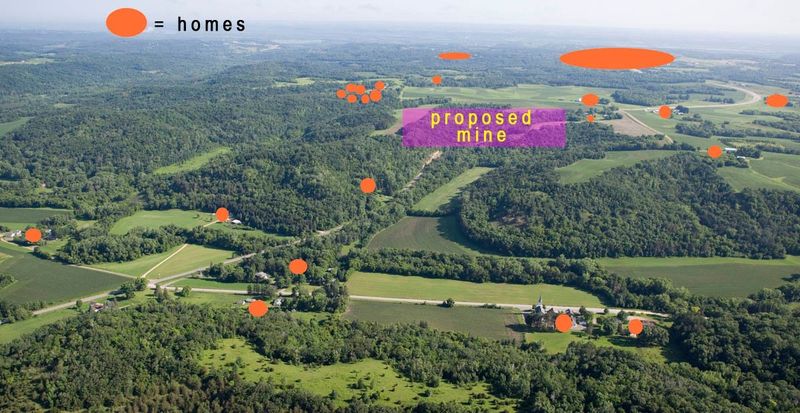 Down in conservative Wabasha County, the board of Wabasha County extends nonmetallic moratorium, the Winona Daily News reports. Translated, that means the moratorium on new frace sand permits has been extended.

But if you read the Star Tribune, the fault lines on frac sand mining are “ideological and environmental battlegrounds.” While Bluestem agrees that environmental concerns are a battleground, the Strib might want to actually look at the partisan inclinations of those citizens objecting to frac sand mining in Southeastern Minnesota before they frame this as a battle of partisan ideology.

In Sand trains stir up dust in St. Paul neighborhood, Chao Xiong interviews filmmaker Jim Tittle, who got caught up in the frac sand controversy when a mine was proposed near his parents’ home in Hay Creek Township, Goodhue County. One of the first things Tittle observied to me was that Hay Creek Township was no bastion of liberalism. The township’s voting record speaks for itself: residents voted solidly for McCain, Coleman, Kline and Kelly in 2008; in 2010, Republican Attorney General candidate Chris Barden matched votes cast for Lori Swanson.

The standard partisan frame doesn’t work (and perhaps that’s another reason why the MPCA is opting out of any meanful action on frac sand mining). Instead, think more about those westerns–like Eastwood’s Pale Rider–where a mining company tramples on the interests of local citizens. But unlike the wild west, citizens take up the weapons of zoning and local control. It’s no wonder that corporations want to strip local people of these tools. It’s that sort of ideological battle.

Open train cars filled with sand have raised alarm in St. Paul’s St. Anthony Park neighborhood, where some residents wonder if the silica that comprises 80 percent of the unprocessed sand is safe.

The cars, which often are parked in a rail yard sandwiched between homes and an industrial zone, are appearing on a more regular basis since an oil boom has increased the demand for the sand for its hydrofracking operations.

BNSF Railway Co., which transports the sand, and Minnesota Commercial Railway representatives said the trains are carrying wet “unprocessed raw sand” — not pure frac sand — and that it isn’t a health risk. The concern, however, is that nearly all information about silica’s health impact are derived from studies in the workplace, where it has been shown to cause cancer, and not of ambient exposure.

“We know it’s [silica] not good for you,” said Hillary Carpentar, a toxicologist with the Minnesota Department of Health. “It’s a classic occupational toxin. I think the concern is that we just don’t know” about casual exposure.

Read the whole thing at the Star Tribune. But don’t hold your breath waiting for dust monitoring and risk evaluation to get done with any transparency soon. Witness what’s happening in Wisconsin.

A group critical of the frac sand industry in the Chippewa Valley is claiming a local sand plant is producing off-site particle pollution that is “quite possibly” a health hazard.

The group’s conclusions are based on a study of data that people associated with the group gathered on their own.

However, a DNR official and a national air quality monitoring expert say the equipment used in the study and the methodology are suspect, and the conclusions are not supported by data being gathered from more sophisticated equipment at the EOG plant site.

Fascinating stuff. Closer to home than the Chippewa Valley, the WDN reports in State experts weigh in on frac sand that 125 people braved fierce storms to hear what those experts might have to say. From the article:

Hillary Carpenter of the Minnesota Department of Health spoke about silica exposure, which he deemed an occupational hazard.

Carpenter said if he lived in the area, he’d be asking for more research about environmental exposure to silica sand — considered a low-level risk by health organizations.

Others on the panel made recommendations including enclosing sand plants, wetting sand as much as possible and tracking how much sand leaves and enters each facility, all measures which Hedman said the City of Winona is exploring.

Carpenter said the emerging nature of the industry means expertise may not have been fully developed yet.

“Monitoring (exposure to harmful kinds of sand) is doable,” he said. “The question is how you do it.”

Are any such studies underway, or will the residents serve as guinea pigs as industrial scale silica sand mining digs wide swaths out from under their feet?

Judging by the letters the paper received, the experts’ discussion was not intended to calm the residents. There’s Marie Kovecsi in We all have a part to play in monitoring:

There is much about this industry that needs additional research and information.

All panel members talked about the seriousness of the consequences. Once a habitat for a rare and endangered species is destroyed, there is no restitution. Once our water is the victim of a spill or accident, there is real damage done. No one expected the I-35 bridge to fail, so it is important to use care when assessing our aging bridge, with its new traffic loads of sand trucks coming from Wisconsin.

This all laid out a case for careful proceeding as we try to plan. One additional measure would be to begin a Generic Environmental Impact Study. Such a study could provide necessary information and research that would be useful and important for planning. This should begin now.

Jeff Falk, who has been involved in the Chippewa Valley citizen-based effort, writes in Monitoring frac should fall on sand companies raised other concerns:

I am particularly concerned about particulate pollution, including silica in the air. I asked that state department representatives, using their expertise, suggest a monitoring plan that would, after the data was analyzed, enable them to give an opinion on the risks to adults and their children’s’ health.

The representative from the Minnesota Pollution Control Agency (MPCA) ignored the intent of the question and detailed Best Management Practices. There was no reference to monitoring.

The representative from the Minnesota Department of health (MDH) basically said silica is dangerous. He could give a risk assessment if provided relevant data — but no one has nor is currently attempting to get appropriate data. This was more of a direct answer to my question but still did not give an idea of what a worthwhile monitoring effort would look like.

Read both letters at the Winona Daily News. The residents of St. Anthony Park have grounds to be concerned.

Photo: Diagram depicting the layout of the proposed mining areas and its proximity to homes. Used with permission of Citizens Against Silica Sand Mining.