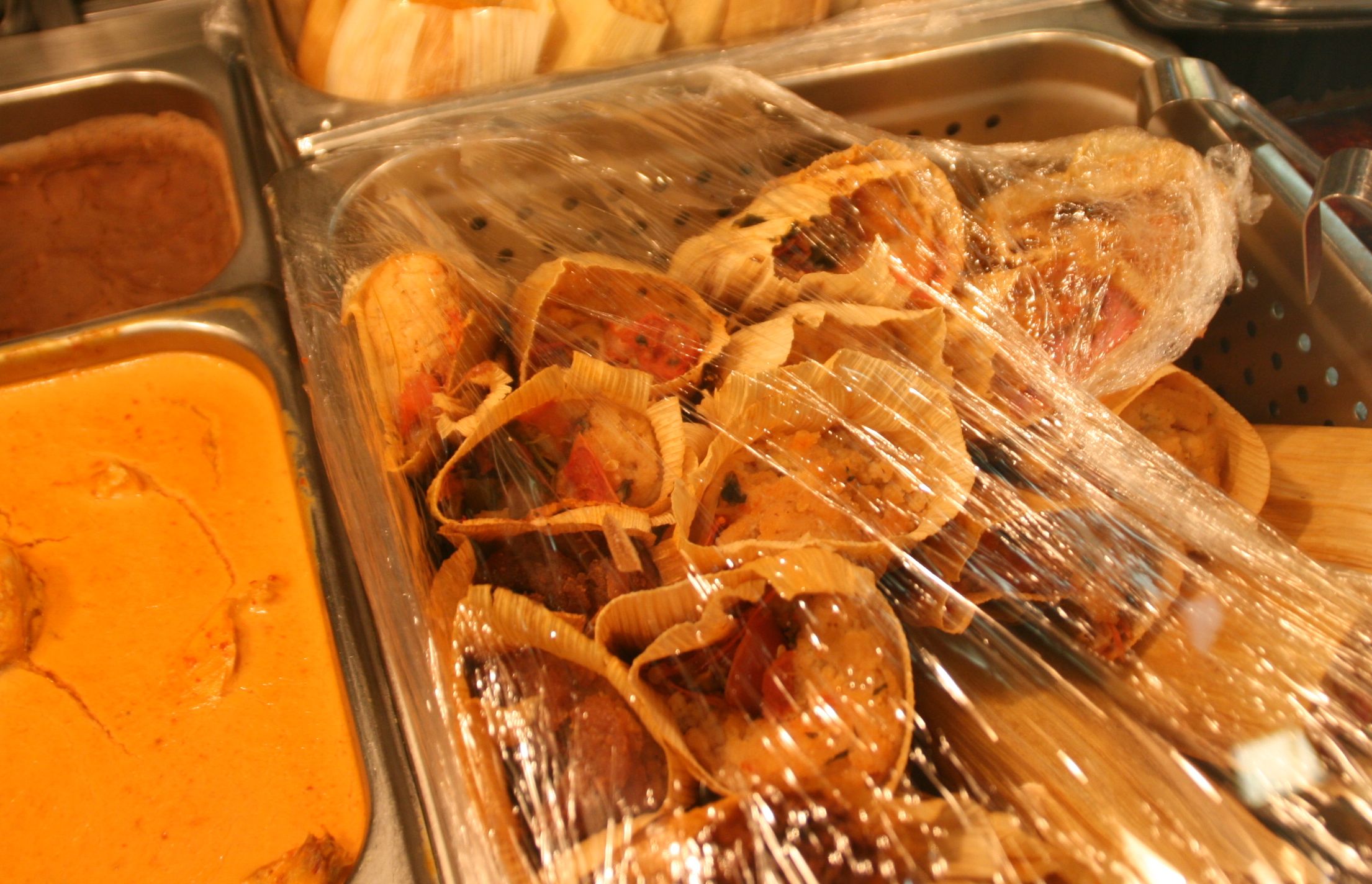 (Photos by Stephanie Fox) Tamales are among the most popular items.

I came across Cinco de Mayo Mercado almost by accident.

I had gone into another not-to-be-named Mexican market and butcher shop to research it for a story. I asked the two people at the front counter if it would be okay if I took some photos and notes for an article I was writing about them. Sure, they said. No problem. I’d been there before and maybe they recognized me. I wandered around snapping photos and finally got some shots of men weighing sausages. I smiled and waved, then went back to the front to ask some questions.

Suddenly, a man flew from behind the butcher counter, waving a meat cleaver and yelling angrily at me in Spanish. Apparently, he didn’t like journalists. I smiled and tried to explain that I’d just wanted to write about their delightful store. I looked to the two folks at the front of the store, but now they wouldn’t even make eye contact with me. The angry man yelled louder and came toward me, still waving the cleaver.

Fine, I said. I’m leaving. I don’t get paid enough for this. So instead, I drove about 10 blocks up Nicollet and pulled into the parking lot of Cinco de Mayo Mercado. I would soon to become a regular customer.

Cinco do Mayo is a small store with a limited grocery selection and a small but decent produce section, but it’s always filled with customers. The crowds come here for the in-house deli, the butcher shop and their staff of friendly, helpful and smiling employees.

Owner Jorge Castro has owned the store for seven years, taking advantage he said, of an opportunity. He’d come to the United States in 1996, spending his first three months in California. “I didn’t like it there,” he said. He’d done his research and had read about a new mega mall that had just opened in the Twin Cities, a place with a lot of job opportunities. He ended up working at a restaurant as cook and manager despite having no experience in professional food service. In Mexico, he’d worked at a paint store, matching colors.

At Cinco de Mayo, he says assigns most of the cooking to his staff but he says, the recipes are his. “I try to bring authentic Mexican food. I do what they do in Mexico.”

The take-out deli carries a variety of cold and hot dishes. The most popular, says Castro, are the carnitas and two styles of freshly made tamales – pork in red sauce and chicken in green sauce. On weekends, you can get stewed chivo (goat) or goat consommé. They make a killer taquitos dorados ­– corn tortillas filled with meat, peppers and spices then deep fried. My favorite menu item is the tongue in green sauce which I get every time the have it. The menu changes daily.

If you are in a cook it yourself mood, the guys behind the butcher counter are happy to help you find what you need (and they don’t chase reporters with cleavers). When buying meat, be aware that Mexican meat cuts are different the than American style. You can purchase everything from thinly cut beef for fajitas or the more exotic – cow feet (for menudo), cow feet soup and tacos Castro told me), pig feet (for posole stew), and oxtails.

Cinco de Mayo is located near the increasingly hip and trendy corner of 38th and Nicollet, down the block from the former home of the once iconic Shorty and Wags, and now a food destination with choices that include Cocina Latina Restaurant, Tibetan take out Apho, the new sushi restaurant Kayatchi, Five Watt coffee shop, Blackbird and the soon to open Nightingales. (It’s probably just a coincidence that there are two bird named restaurants across the corner from each other.)

The mercado will be part of the Open Streets MPLS celebration on September 14th, a city sponsored event, with Nicollet Ave. blocked to automobile traffic from Lake St. to 46th. You can join pedestrians and people on bikes, rollerblades, and skateboards for a slow-mo neighborhood celebration. Castro says that Cinco de Mayo will have a food stand in front of the store. “You should come,” he says.

Tamales are among the most popular items.

If you don't know what something is, you can ask for a taste.

Chicken, beef and pork ready to go or cut to order.