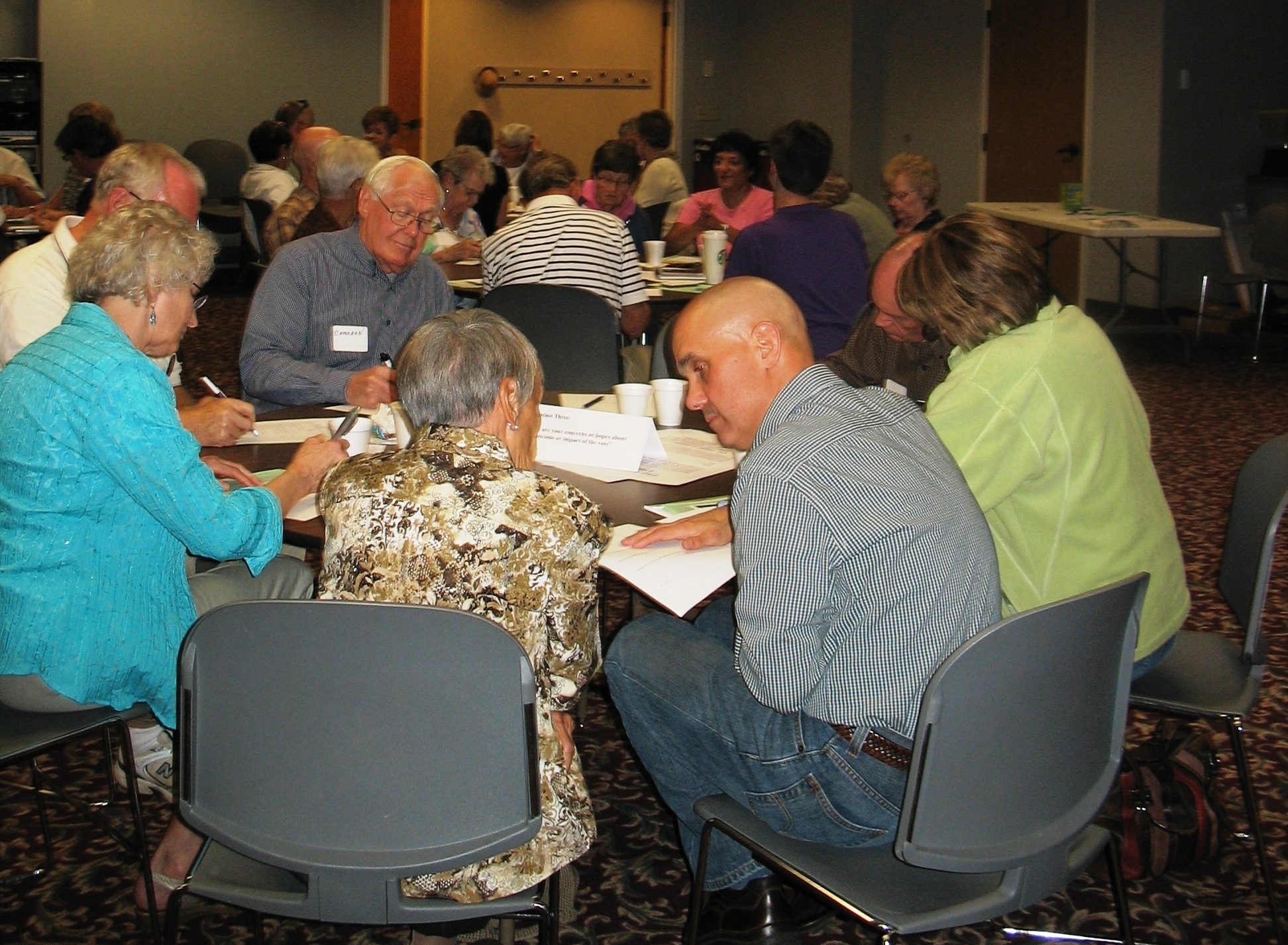 Respectful Conversation gathering at Prince of Peace Lutheran in Burnsville on 10/9/12. (Photo by Maria Paschke, Communications and Development Assistant at the Minnesota Council of Churches.)

What if the solution to our political gridlock was as simple as the ground rules they set in group therapy sessions like Alcoholics Anonymous? Rules that respect confidentiality, that ensure everyone is heard and get’s a fair turn, that encourage listening over speaking, and an atmosphere of respect by preventing cross-talk and interruptions.

This is exactly the type of atmosphere that the Minnesota Council of Churches is attempting to foster in their Respectful Conversations Project, and their model is meant to accomplish the same thing that AA’s model attempts, to create honest conversation in a safe environment.

The project, funded by the Bush Foundation, was launched back in May, to try and assuage the hostile climate surrounding the marriage amendment debate, which would constitutionally amend the definition of marriage as the union of one man and one woman. Their goal — to reach 2,000 people over 50 conversations and have respectful, non-heated conversations on the topic.

“It’s about bringing people together across differences,” said Theresa Gardella, a volunteer who has facilitated four of these conversations. “This is a way of saying that we can still talk to one another, that we can still be part of the same community.”

Gardella was one of the facilitators at a recent conversation on Nov. 1, at Joyce United Methodist in Uptown, Minneapolis. The gathering was a small one, the smallest Gardella has seen so far, and out of the 12 people there, no one had opposing views on the amendment. She says this has mostly been the case with the conversations, and it’s something the project members have been discussing — how to get supporters of the amendment to come out to the conversations.

At the conversation, they prompted the attendees with a video made by the Theater of Public Policy, which explained the rules to follow during the conversation and why they were so important.

1. Speak for oneself; Use “I statements;” own and offer your thoughts and feelings honestly; avoid grand pronouncements or stating positions of others

2. Practice respect in speaking and listening; accept that others may have different views, without needing to debate or set them straight

3. Be brief in comments; honor timeframes and refrain from interrupting

4. Respect confidentiality: After the conversation, do not attach names to comments made without permission

5. Allow people to pass, or pass for now, if they are not ready or willing to respond to a question

The video explained that in debate, the brain can interpret the challenging of one’s belief system in a way that is similar to physical confrontation, activating the fight or flight instincts, and this can cause people to fight without listening or simply shut down. The purpose of the structure is to prevent those instincts from taking precedence.

“This is not about making sure everybody can have dinner together every night,” Gardella reiterated after the conversation, instead, she thinks it’s really just about spreading tolerance, something she believes we will need even after the election.

Pastor John Darlington of Joyce United Methodist, also participated in the conversation that night. “Our culture is more divided than ever,” said Darlington. “Division only causes more frustrations and problems and gridlock.” Instead, he believes we need to focus on what we have in common and work from there, and that these conversations are the first step in that process.

That night at Joyce United Methodist, the conversation itself was very calm. Everyone was timed, and no one was allowed to interrupt during another’s turn. The questions probed us, asking us not only about our beliefs, but how we believed those beliefs were shaped and what we feared and hoped for. What drew us there? What life experiences influenced our stance? What were our hopes and concerns with the amendment?

With the personal questions, the timed responses and the inability to respond directly, many may find the process a bit surprising.

“I like it,” said Andy Petter, who has participated in four conversations. “Especially when there’s people of different viewpoints.” Petter says he’s experienced conversations where members had opposing views on the amendment, and maintains that everyone remained very respectful. But he’s not surprised that people imagine the worst coming into the situation. In a conversation in Cambridge, he remembers a woman was shaking because she was afraid that she would be the only one with her viewpoint. “She left [the conversation] with hope,” said Petter.

Despite the lack of diversity, proponents of the project still believe it’s serving a greater purpose.

“I think that if there had been a more equal distribution [of beliefs], it would have been equally effective, if not more so,” said Darlington. “It didn’t stop it from being a good experience.”

Darlington believes the method should be used outside the constraints of the project, as well, such as within families. He admits that the process may not work for everyone, but he believes it can work for many.

“I’m sort of a deep believer in the power of conversations,” said Gardella. “If we can sit down and talk with one another in a process, in a way that we can actually learn about each other, there is tremendous potential to become a better society.”