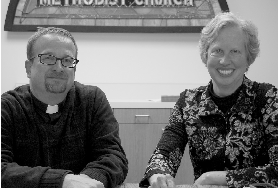 (Photos by Matt Grimley) Dan Doerrer, pastor of Nativity Church, and Rev. Susan Mullin, director of faith formation for Faith United Methodist Church, after a first meeting to decide how the two churches can address sustainability within their churches and the larger St. Anthony community.

On the first day, there was a meeting.

It was a Citizens for Sustainability meeting in October. Dan Doerrer, associate pastor of Nativity Church, was invited to attend by members of the group. There he connected with Rev. Susan Mullin, director of faith formation for Faith United Methodist Church.

CFS is a grassroots organization composed of volunteers who educate and act on principles of sustainability. Mullin had attended a few CFS meetings, perhaps as a remnant of her old life as a professional geologist and environmental consultant, working with the group’s steering committees on solar energy initiatives.

Recently, CFS’ lead organizer Clif Ware chaged his focus to broader education efforts as members of the group’s steering committees had all chosen work on their distinct local causes within the movement.

Out of the october meeting, Doerrer, Mullin and a few CFS volunteers decided to start something bigger, further reaching in their sustainable efforts. But they weren’t sure what. They just knew they would get together soon.

Doerrer is somewhat new to thinking green. He attended the Sustainability Fair at Silverwood Park on Nov. 20, as CFS members had helped put together a display of his congregation’s own green moves — changing lights over to LED, increasing the amount of reusable cups in-house, and switching over to an electronic newsletter. He says reviewing all the little things they did at the church led him to see, in the past few weeks, how important sustainability was for St. Anthony.

“We have contact with congregations, many of whom are already inclined to have conversation about sustainability but maybe aren’t as passionate about the issues,” he says. “And this might be a bridge for folks. It takes on another approach to informing, inspiring, and leading folks to action.”

Mullin, having worked in the environmental field for years, was more used to these ideas. Next week, the old theater lights in the Faith sanctuary will be switched over to LED, and the trustees will soon have another energy audit done and its efficiency suggestions completed. These are just small parts to a larger vision.

On the second day, some days later, there was also a meeting. This time, it was hosted by Mullin at Faith UMC. Some CFS volunteers and congregation members attended, as well as Doerrer, to figure out just what this handful of people could do.

Ideas were thrown around. What about an Earth Day event cleaning up a park? The churches could host it. Solar panels, they could go up on the church. Or a community solar garden? You could also connect up the sidewalks going to school for kids. How could we influence some of St. Anthony’s city officials? And then how do we connect with Hennepin and Ramsey county officials? It was complicated.

More than an hour later, Mullin had to call it. It was getting late. “I’m one of those concrete people,” she said. “Let’s figure out what we’re going to do.” It was decided the group could work on two projects: a rain garden at Faith UMC, and a walkability initiative in St. Anthony.

“The rain garden… it’s something we can do that’s not incredibly challenging,” she says. “It’s not costly, I hope, and will involve lots of people and be visible.” When they get to improving walkability of the city via sidewalk and bike lane construction, that will involve more advocacy. But it’s still not very political.

“We’d just like to see a walkable community for our kids, for our elders, and here are things that we think would help that,” she says.

The two churches won’t call it a partnership with CFS. It’s unclear what they’ll call it, even, but it’s an obvious first step Prfor a nascent community group. They’ll start meeting with people from the city government soon and having initial rain garden planning meetings in the new year.

Doerrer is excited. He says it’s all part of getting out of the church’s shell.

“Any congregation that gets lost in within itself is not one that’s going to be relevant and appealing to folks in the community,” he says. “It’s an opportunity to take our spirituality and apply it to life… The more we celebrate other people applying their spirituality to life, the more it resonates with us and we can be inspired to see how we’re called to make a difference or live more fully.”

Mullin, likewise, marvels at the interactions between people, especially those made in the initial meeting between the churches and CFS. “The people who live in this area, once they start talking, they know people, they have these connections,” she says. “You start to see some miraculous things happen.”

Some days in the future, there will be a new faith-based sustainability group in St. Anthony.