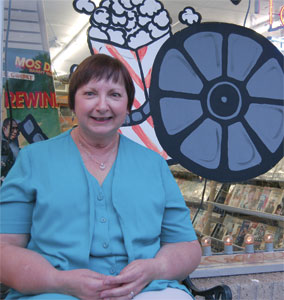 Johansen at her former video store: Crown Video and Tanning.

A subtle but ever-apparent charm has always been present in the businesses on Franklin Avenue. Whether it’s the warm smile you receive when entering Welna II Hardware, or the enormous hand-crafted buckwheat pancake you devour after placing your order at Seward Café, it’s clear that our neighborhood has a personality of honesty and hard work. Such traits certainly weren’t absent in Chris Johansen’s business, Crown Video and Tanning, which recently closed July 7th. Though the familiar murals of Luke Skywalker, Bruce Wayne, and Harry Potter have since been removed, Johansen’s work as a business owner in Seward continues to shape and positively influence the community.

Though Crown Video and Tanning maintained a far more iconic presence on 27th and Franklin Avenue, Johansen explained that she initially bought the video store in a 1,200 square foot property on the corner of 20th and Franklin Avenue (where Blue Nile’s parking lot now sits) for her husband to own and operate.

Johansen’s interest in the area stemmed from her time as an employee at the University of Minnesota. During her time working on Riverside Ave., she got to “know the area and how good the people are.”

After a short time though, Johansen’s husband found a job and she was left as the manager of Crown. “I had no idea what I was doing,” Johansen said.

As a former teacher, Johansen reported the she caught on quickly and learned to adapt to the video business. Even though she owns a house a Burnsville, she claims she only slept there-she lived in Seward.

Due to her somewhat unofficial residency in the neighborhood, Johansen felt it important to become engaged with her community. When Diann Anders introduced her to the Seward Neighborhood Group (SNG), a neighborhood organization established in 1960 that devotes its efforts to the betterment of Seward, Johansen bit at the opportunity to get involved.

After seeing how little representation there was from business owners in SNG, Johansen decided to intervene. “The people who live in the community and work in the community exist in a symbiotic relationship,” Johansen explained. “We need each other.”

It wasn’t long before Johansen was elected to the board and joined the SNG’s development committee. According to Johansen, her days would often last from “nine o’clock in the morning to ten at night,” due to her commitments with SNG. When asked by her husband as to why she devoted so much time to her job, Johansen would often reply with, “As a business, we have to give back. We have to pay it forward.”

And though Johansen eventually left the SNG’s board to allow other business owners to step in, her commitment to the area persisted. While continuing her position in the SNG’s development committee, Johansen joined the SCCA’s board as a way to further her pledge to Seward.

Last June, Johansen decided to sell Crown Video to Nicollet Village Video, which has since renovated into Filmzilla. Because Johansen wasn’t expecting to sell her space, she had only 21 days to close the store in order to accommodate the new buyer, Chris Becker. While, for a time, it looked as if Johansen would’ve been stuck with massive amounts of leftover inventory, Peter Fleck and Erik Reese, both non-customers who participated with Johansen in SCCA & SNG, decided to inform the surrounding community.

“I had no way of informing the neighborhood of Crown’s closing, other than sending a blast email to my customers,” Johansen said. “But Erik Reese sent out an email, and on Friday morning, the store was packed with people. Once Peter Fleck got wind of it and wrote on his blog, everything snowballed from there.”

Johansen remains optimistic that she will now be able to participate in Seward events which she could not attend due to her long hours at the video store.

“I just want to say that the past 20 years have been the best adventure of my life,” Johansen said. “I never expected to have the experiences and meet the people I did; the time flew. Now, I’m trying to figure out what my next 20-year adventure will be!”