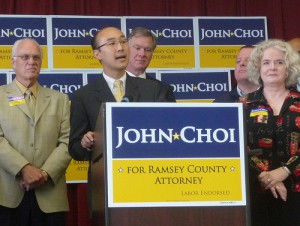 Choi announced his 2010 bid for the Ramsey County Attorney’s office at a press conference today at the Skyline Towers apartment complex in St. Paul. The location was not arbitrary: it’s where Choi’s family initially settled after emigrating from South Korea when he was three years old.

“I’m running for county attorney because I want to make a difference in the criminal justice system and to ensure the safety of our community,” Choi told the audience. “I have a proven record of leadership and I want to continue to serve this community which has given so much to me and my family.”

But it’s clear from Wednesday’s event that Choi, long active in DFL politics, will be a formidable opponent. He was introduced by St. Paul Mayor Chris Coleman and was joined on the stage by state senators Mee Moua and Satveer Chaudhary, Ramsey County commissioners Rafael Ortega and Toni Carter and three members of the St. Paul City Council, among others. He’s also received the backing of numerous labor unions, including the city’s police and fire workers.

“When John came to me and said he was thinking about running for county attorney, I quite frankly suggested he shouldn’t,” Coleman (pictured) told the crowd. “That was just being selfish on my part, because I knew that the work that he did in the city attorney’s office needs to continue.”

A Facebook group was created in April encouraging Choi to seek the upgrade in office. Subsequently a counter group was started on the social networking site lobbying against his candidacy. They cited Choi’s involvement in prosecuting misdemeanor charges stemming from last year’s Republican National Convention as evidence of his lack of fitness for the office.

“The people in Ramsey County want a proven leader who will effectively manage a prosecution of 300 employees and a $38 million budget. That is no easy task. They want a leader who will prevent juvenile crime and find innovative ways to prevent criminals from re-offending.”