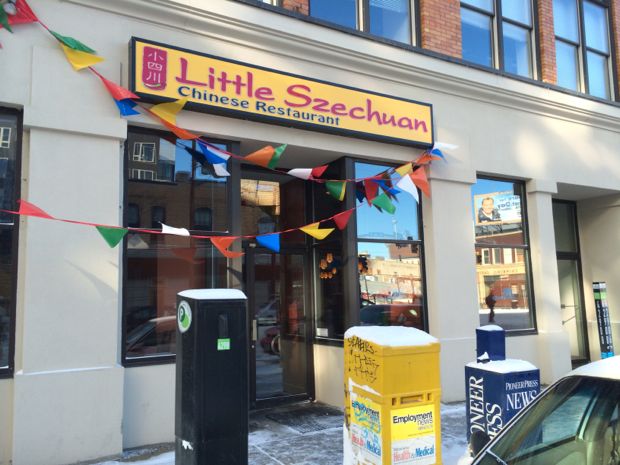 It’s the Year of the Horse, and if you are planning to celebrate by going to a Chinese restaurant, the Twin Cities now offer a couple of new options — both actually offshoots of older highly rated establishments.

Cafe 99 in St. Paul’s Midway/Como neighborhood has the same owners and chef as the Tian Jin Chinese restaurant in Chanhassen, and the newest Little Szechuan in Minneapolis’s Stadium Village is preceded by branches in St. Paul and St. Louis Park.

Both make bold claims — Little Szechuan proudly proclaims that CNN named it to a list of the 50 best Chinese restaurants in the U.S., while Cafe 99 has a sign on its door informing visitors that they are entering “the best Chinese restaurant in the Midwest.” The menu describes their chef Yang as the only “nationally certified Master Chef from China.”

I would take both of those claims with a grain of salt — or a splash of soy sauce. I’ve only sampled a few dishes from each restaurant, but from what I have tasted so far, they are in the first tier of local authentic Chinese restaurants — along with the Tea House (multiple locations) , Mandarin Kitchen, and Grand Szechuan (owned by Guanghe Luo, the original chef at Little Szechuan.) Pagoda in Dinkytown probably also belongs in that first category, and I have heard that if you know what to order, Peking Garden in St. Paul is still quite good.

The new Little Szechuan caters to the U of M student crowd with a $7.49 lunch special — pick three dishes, plus rice or noodles, as well as a selection of meal-sized soups for the same price. The dinner menu offers most of the same dishes as St. Paul and St. Louis Park — traditional Szechuan fare, with a few more exotic items that you won’t find on the St. Louis Park menu — such as the phoenix talons with wild chili (chicken feet, $9.95), Szechuan diced rabbit ($9.95), and spicy pork intestines in dry pot ($13.95). My lunch combo let me sample the mapo tofu and crispy fried fish, plus the couples beef – a traditional cold dish of sliced beef and tripe ($9.95) — all quite enjoyable. On another visit, we ordered from the dinner menu and shared bamboo tips in chili sauce ($7.95) and the fish fillet with fresh Szechuan peppercorn ($14.95), both lively and spicy but not overpowering.

The new Cafe 99 opened last fall in the space formerly occupied by Bascali’s Brick Oven at 1552 Como Ave. It’s across the parking lot from a Chinese grocery, and not far from the U of M St. Paul campus, and to judge by some of the items on the menu, like the stir-fried pork kidney ($10.95) or beef tendon home style, and double cooked pork intestine, they too are targeting the Chinese student and professional community.

We only tried a few items, but were impressed with the salt and pepper shrimp ($19.95), and enjoyed a special steamed New Years dumpling stuffed with mackerel ($8.95). On a return visit, I tried the noodles with fried bean and pork sauce Peking style ($7.50), from a section of the menu billed as “saucy noodles / Eastern spaghetti.” This was brought to the table with the fermented soybean paste and pork sauce on the side, and reminded me quite a bit of a Korean dish called jajangmyeon, found occasionally at local Korean restaurant. There’s lots more I’d like to try, including the Hong Kong crystal fish balls ($13.95) and the sauteed sliced sole in rice wine sauce ($13.95).

house made dumpling with mackerel