Ai Weiwei isn’t the only artist who’s been detained by Chinese authorities: The Soap Factory notes on Facebook that artist Guo Gai has been in police custody since being detained in Beijing on Mar. 24. Guo, who is scheduled to have a work in a show at the Minneapolis art space this August, also had his computer confiscated, like Ai, according to a tweet by the Soap. (More details to come.)

On March 20, dozens of artists appeared at a performance art exhibition [pictured below] at the Beijing Museum of Contemporary Art. Some of the pieces touched on the current crackdown on freedom of expression and the “Jasmine Revolution,” and as a result four artists were detained. On March 24, Beijing artists Huang Xiang (黄香), Zhui Hun (追魂), and Cheng Li (成力) were criminally detained for “causing a disturbance” by officers from the Songzhuang police station in Beijing. The three are currently being held in the Tiahu Detention Center in Beijing’s Tongzhou District. Also on March 24, Beijing artist Guo Gai (郭盖) was taken away by police, who confiscated his computer. It is believed that Guo was seized for taking photographs during the exhibition. Guo is also being held in the Taihu Detenion Center, though further details are currently unavailable.[iii] 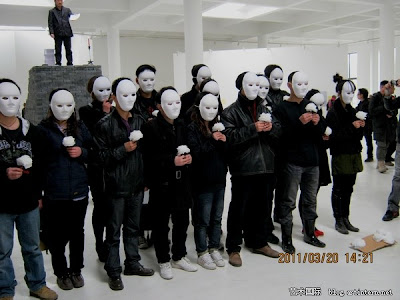 Guo is scheduled to present a “new large scale photographic work …with a newly commissioned Choral piece” at the Soap Factory on Aug. 27.

On Facebook, the Soap Factory says the detention is “part of the deplorable government crack down on creative expression.” As Chinese Human Rights Defenders wrote on Mar. 31, “The Chinese government has criminally detained a total of 26 individuals, disappeared more than 30, and put more than 200 under soft detention since mid-February after anonymous calls for ‘Jasmine Revolution’ protests first appeared online.”

…Activists, possibly from outside China, have called on citizens in China to express their displeasure at the country’s lack of reforms and officials’ corruption by silently meeting in front of department stores or other public areas for a “Jasmine Revolution,” a named borrowed from the Tunisian revolt that set off the Middle East unrest.

Organizers have now called for the protests to continue each Sunday, and gave a list of spots in a dozen major cities where people could “go for a stroll” this coming Sunday at 2 p.m.

Because the calls are made via Twitter and other services widely blocked in China, they circulate only to those who know how to bypass Internet censors. But Chinese authorities have been responding with their customary zeal. On Sunday, a protest in Beijing was overwhelmed by police officers.

Among others detained by police across China are writers, bloggers, students, lawyers and human rights activists. A map by CHRD of detentions (click to enlarge): 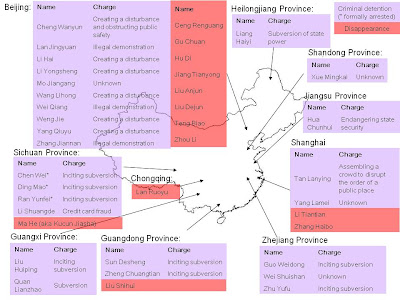