I faced an ethical dilemma in writing about Chimborazo, the Ecuadorian restaurant at 29th and Central Ave. in northeast Minneapolis, but fortunately, I was able to resolve it in your favor.

The dilemma was simply this: do I as a restaurant reviewer have an obligation to inform readers about the homemade passionfruit ice cream? Or is it permissible to keep that information to myself?

The dilemma struck me on my first visit, when I was informed that I had just ordered the very last serving of passionfruit dessert. The waiter who made this batch would make another batch soon, but that might take a day or two.

My first selfish calculation about the passionfruit ice cream was that the fewer people who knew about this delicious dessert, the better.   But then I learned that they are considering making it a regular menu item, so now I figure that the more people know about it and ask for it, the more likely Chimborazo is to make make sure it is always available.

I have a passion for passionfruit, and order it wherever and whenever I can. (On South American menus, it is often called maracuja.) One of my favorites, so far, has been the passionfruit sorbet at Sonny’s / Crema, though their mango-passionfruit blend isn’t nearly as good. B.T. McElrath’s passionfruit truffles are also excellent. But Chimborazo’s version is in a class by itself – maybe because it is really an ice cream, rather than a sorbet. 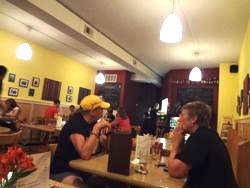 Actually, we already had a lot of very fine food before we even got to the dessert. The appetizer selection includes a delicious shrimp ceviche (shown above, $9.50), marinated in lime with tomatoes and onions and crunchy toasted hominy kernels, accompanied by crisp deep-fried patacones (flattened fried slices of plantain). By contrast, the llapachingos, three bright orange achiote-colored mashed potato patties stuffed with cheese ($5.50), got a split verdict. Carol proclaimed them bland, which they were, but I have a fondness for bland comfort foods, like Chinese congee (rice porridge), and turnip cake, so I liked them just fine, especially when accompanied by a savory peanut sauce. Also very delicious, the encocado ($10.50), generous chunks of mahi mahi (shrimp also available) in a creamy golden coconut cream sauce with fried plantains. 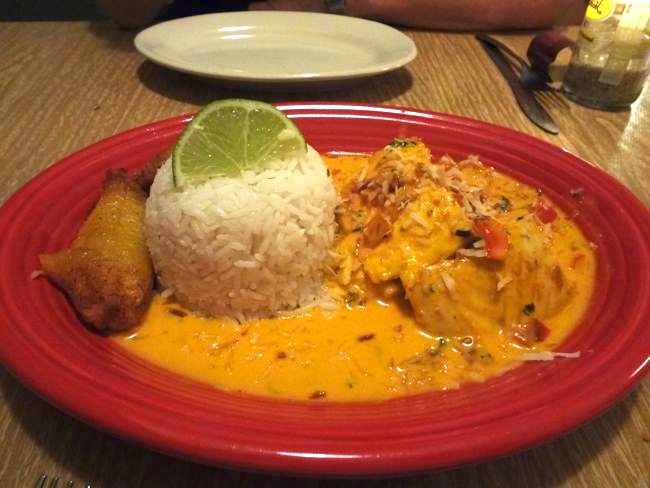 On a return visit, we split an cheese empanada ($2), filled with a white cheese and dusted with powdered sugar, and an appetizer of patacones with fresh cheese, marinated onions and tomato, and a delicious green aji criollo sauce, made with peppers, coriander, garlic and I’m-not-sure-what-else. Aji criollo is sometimes described as a hot sauce, but Chimborazo’s version had only a hint of heat, nicely balanced with the other flavors.

Carol’s sanduche vegetariano was a sandwich of peppers, onions, lettuce, tomato, cheese, avocado, and aji criollo, served with a choice of soup, salad or fries – refreshingly light, but still ample as a meal, and a great value at $7. Other sandwich options, available all day, include roasted pork and grilled chicken, with choice of side, for $7.50. I was tempted by the churrasco, a traditional combination of flank steak (or grilled chicken), fried egg, beans, sweet plantain, avocado, fries and rice ($10.50), which can be found on almost every Ecuadorian menu, but opted instead for the seco de carne, a hearty stew of beef braised in beer in a thick, flavorful gravy, served with rice and fried plantain. It was a generous portion, but I suppose I could have eaten it all if I had really wanted to. Instead, I took half of it home, as I had to make room for more of that delicious passionfruit ice cream. 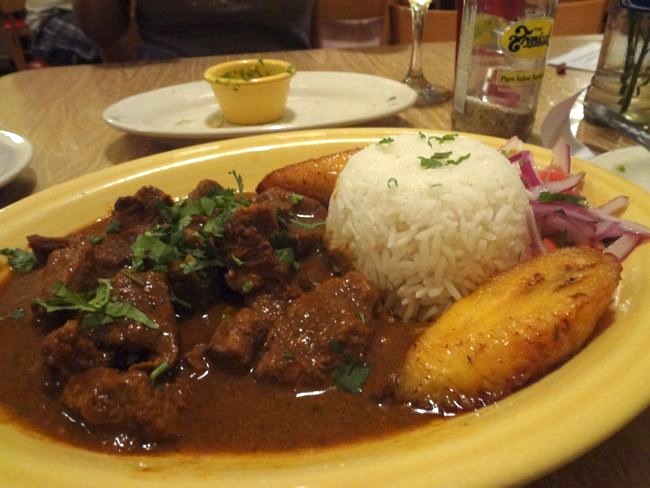 It took some doing to even persuade Carol to try Chimborazo. We’d been to several other local Ecuadorian places before (Los Andes and Cocina Latina, specifically), and they tend to feature a lot of meat, plus dishes like tripe stew, and not a lot of atmosphere.  Chimborazo is different on both counts – it offers some of the staple Ecuadorian meat dishes, like churrasco and saltado, but it also offers a good selection of fish, seafood and vegetarian dishes. And it also offers a much nicer decor than the usual ethnic eatery, with walls adorned with traditional fabrics and photographs. While I did see a few customers who might have been Ecuadorian, most of the clientele seems to be 20-something hipsters. Chimborazo communicates with that clientele through a very active Facebook page, updated twice a day with lunch and dinner specials. On Wednesdays, they feature a cheap date special: two entrees and a bottle of wine for $35.