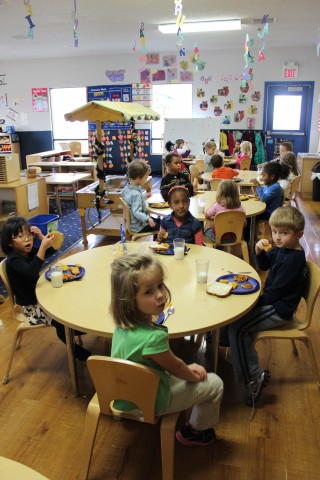 When a four year old in our project was asked recently where carrots come from, he pretty well nailed it: “The ground, and farmers water them and pick them and give them to people and bunnies too, and stores.” We couldn’t have said it better ourselves.

So amidst all the gloom and doom about childhood obesity, there is reason for hope. One bright light on the path to healthier kids is Farm to Childcare (F2CC). By connecting kids with local farm fresh foods, F2CC initiatives support farmers who produce healthy choices like fruits and vegetables while helping our youngest eaters get off to a good start.

IATP launched our new Farm to Childcare pilot in Minnesota last summer. With our childcare partner, New Horizon Academy, we designed a set of practical, on-the-ground strategies to try out new approaches in childcare settings: menu innovations featuring local foods, age-appropriate curriculum, parent outreach and a rigorous evaluation program. Now we’re pleased to share some of what we did and what we’re learning. Here’s the scoop:

By the end of the pilot, we found that:

Through a survey of parents, we learned that:

So we have made some initial inroads in building bridges among very young children, childcare providers and local foods. What is next?

First, IATP will have the opportunity to share this work on a national stage at the Partnership for a Healthier America Summit, part of Michelle Obama’s “Let’s Move” initiative, in Washington, D.C. in a few weeks. Then, our Farm to Childcare initiative will be rolled out in 2013 to all 60 New Horizon Academy childcare centers in Minnesota. Lastly, IATP will use what we’ve learned to improve our F2CC model and then share all of our F2CC resources later in 2013 with early childhood advocates, childcare providers, farmers and policymakers around the U.S.

We hope that these efforts will enable others to learn from our mistakes and our successes, and help stakeholders around the country get more of those carrots to our littlest eaters (and to bunnies, too).