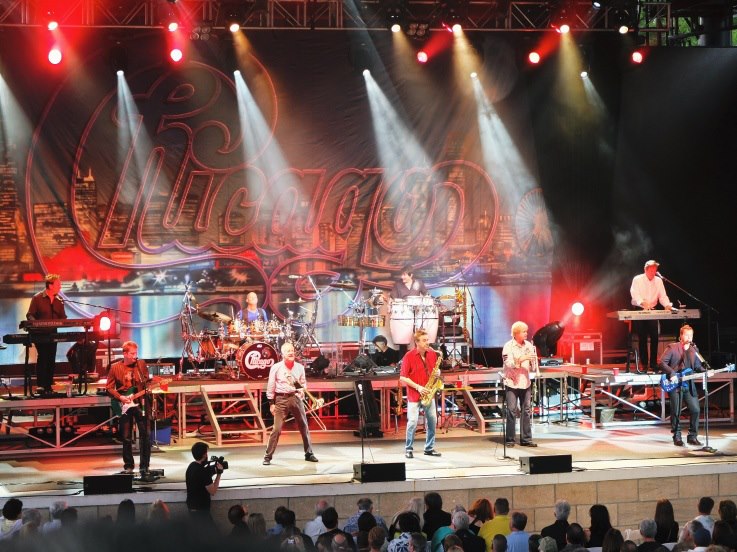 Once upon a time, way back in the late 1960s there were three bands who played rock music a la big-band style. They were The Electric Flag, Blood, Sweat & Tears and Chicago Transit Authority. Hipster authorities had it that the Flag were the baddest, followed in quality by the Al Kooper-led B, S & T, then the Kooper-less lineup, then the woefully commercial CTA (who quickly shortened the name to Chicago). Well, baddest to the bone or not, Chicago, charting higher and lasting a whole lot longer than the other two put together, wound up leaving an indelible, signature imprint on the music industry.

April 27th, literal living pop-rock legends rolled into the Twin Cities at the State Theatre and regaled a sold-out house with a superb show of what the beauty of doing with it with horns is all about. They delivered sweet melodies, layered texture and excellent musicianship—all with kick-ass power. Even if they did have to do it without key founding members, most particularly the late Terry Kath; Kath’s successor Bill Champlin; and veritable voice of Chicago, Pete Cetera, who left the band in the mid-80s. On the face of it, you’d have to wonder who, despite a core of exemplary players, is left worth coming to see, Robert Lamm being the only vocalist still there. You’d be, in a word, surprised.

Jason Scheff, who replaced Cetera in ’85, sounds exactly like him, down to the last note. Fact is, when Scheff joined the band, casual listeners never knew the difference. Lou Pardini, touring personnel who stepped in permanently for Champlin in 2009, is more than capable, actually more interesting than Scheff. Where Scheff copies Cetera phrase for phrase, Pardini does some very nice vocal variations on the recordings for which Champlin sang lead. So, between the three singers and axemen with cast iron chops, the magic of Chicago remains very much intact.

On stage, they are something of a hang loose crew, palling around, cheerfully thanking the audience every now and then for keeping them worldwide successes for over 45 years. The lone drawback to the evening, the fella on trombone is such a preening, posturing ham, you’d think the name of the group was Chicago starring James Pankow. Other than that, the performance was about as perfect as it needed to be. They did almost all the hits, threw in a few other artfully executed jazz instrumentals and, at length, created a fine night with a band that made music history.