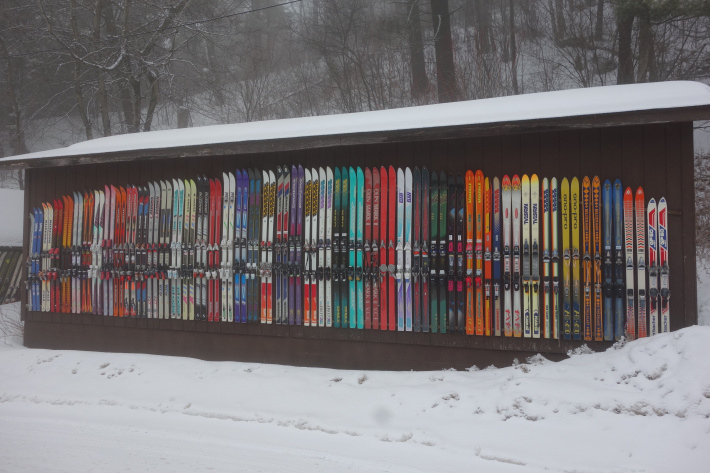 We drove carefully along Duluth’s Skyline Parkway toward Chester Park Saturday morning. The streets were thick with fresh, wet snow and fog shrouded our slow progress into the forest. We knew we had arrived at our destination when we spotted a set of wooden buildings decked out in a rainbow array of old skis. We had come on a mission to discover the Shangri-La of community-run ski hills, Chester Bowl. 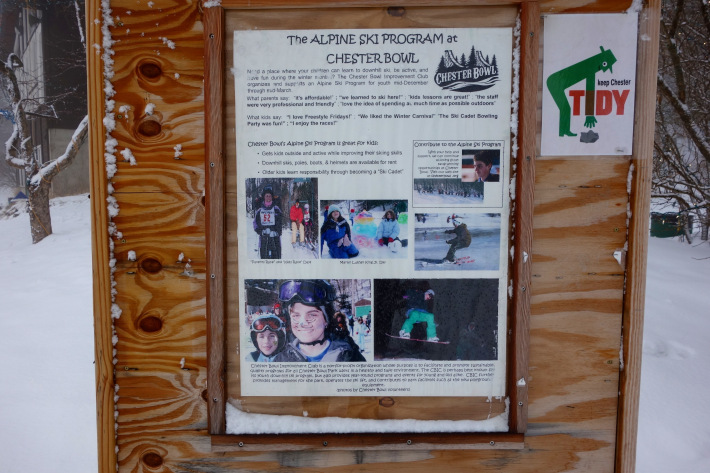 When we decided to form a booster club to support Mount Como, we looked for models of community-supported ski hills. Internet research turned up a few such places. Cochran’s ski area in Vermont stood out as an example of the kind of place we envisioned: simple, unpretentious, affordable and committed to community. One of my colleagues on the hill, mentioned that she had heard of a community-supported ski area in Duluth called Chester Bowl. Not much beyond that was known. On a recent visit to Duluth, I decided to pack my skis and check it out. 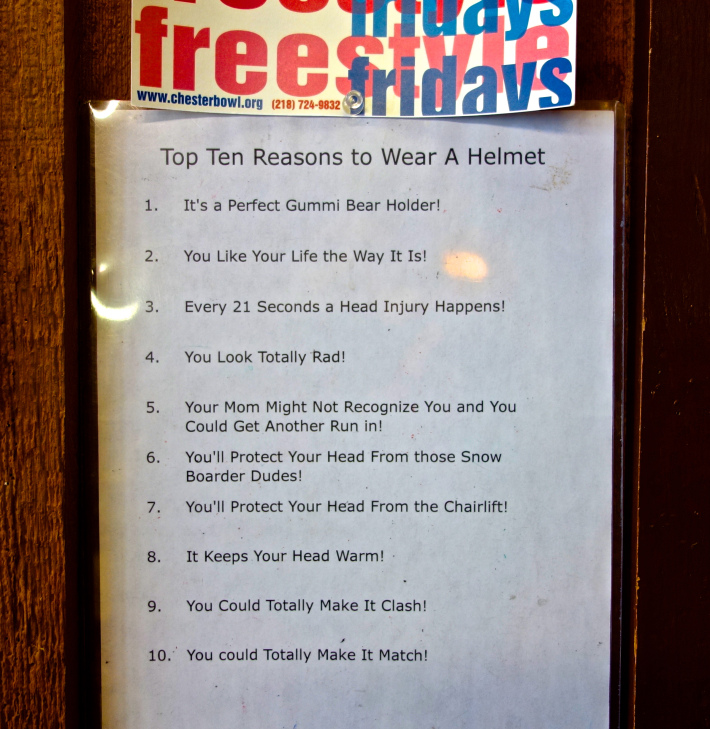 Saturday morning, Thom Storm had no trouble picking me out as I walked into the chalet. He welcomes and knows just about everybody at Chester Bowl. He’s not only the executive director but also the main booster and architect of the Alpine program. He has been on the job for over 30 years and runs things with seasoned grace. We agreed to meet out on the hill after I got into my ski boots and helmet. 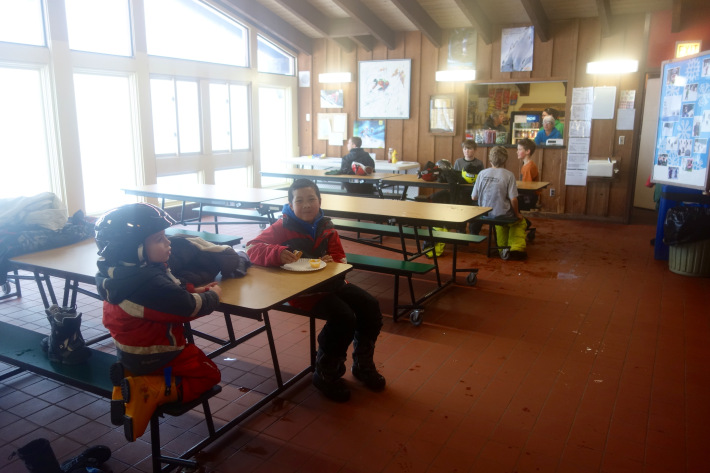 I paid cash for a couple of lift tickets–a whopping $5 a piece–from volunteers at the snack concession window upstairs. The two women told me that their kids are the skiers at Chester Bowl and, as moms, they are happy to volunteer behind the counter, staying warm, serving snacks and keeping an eye on the kids as they come and go. As members of the Chester Bowl Improvement Club (CBIC), they contribute a minimum of three hours of volunteering a year. 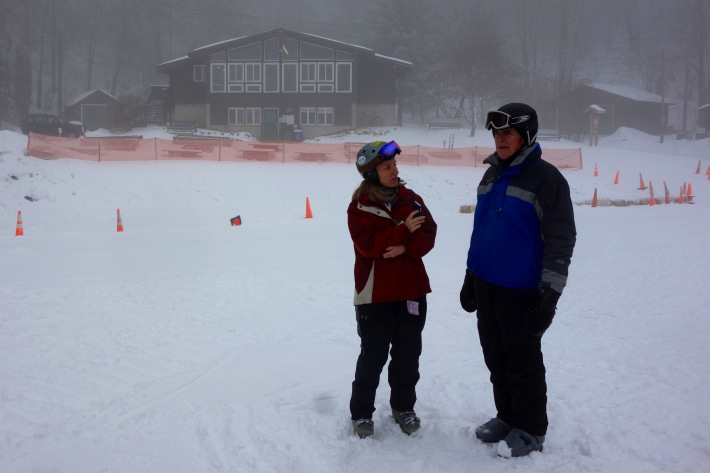 I met Thom outside at the base of the hill. It was almost noon and the fog was so thick that the lights were on. The chairlift disappeared into the mist so I couldn’t see the top of the hill but Thom told me that it rises 800 feet and has a vertical drop of 175 feet. There were kids and adults on skis and snowboards racing down the hill and lessons going on in an area marked off by orange cones. Two old ski jumps loomed nearby, no longer used, but reminders of the 100+ year history of ski activities at Chester Bowl. 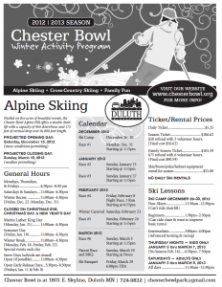 Thom explained how the Chester Bowl Winter Activity program works. Participation is built on commitment to the community ethic of the program. Members rent from the program’s collection of over 700 pairs of skis, boots and helmets. For a little more than $100 the skis are fitted and handed over for the season. A season ticket is $52 dollars. If you put in your three volunteer hours, you get $50 back at the end of the season. There are deals for families and a scholarship that turns no one away due to financial need.

The hill is open three week-day evenings and all day on the weekends and school holidays, December through March. Programming includes free lessons which begin with Ski Camp in December. Lesson opportunities continue throughout the season. There is a racing hut on the hill and fun races are held every couple of weeks with times posted online. Various special events happen throughout the season which culminates with a family BBQ on the hill and a spaghetti dinner banquet.

The season begins each year with a fall lottery which allows CBIC members to get a date in November for a ski fitting. Thom told me that he begs, borrows and cuts deals with local sources to get the equipment needed. Volunteer opportunities begin before the snow falls with a hill clean-up day in October. Thom explained that one goal is to get people skiing but the more important goal is to build community. 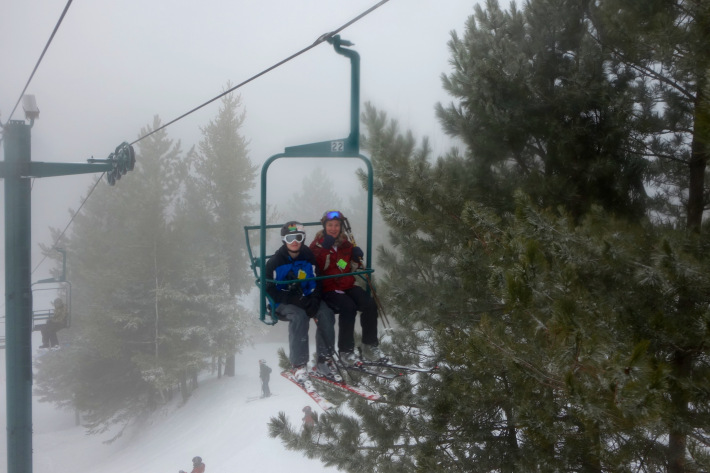 After chatting with Thom for a bit, I decided to follow my son Jamie who had already explored the hill. I rode the chair to the peak where a sign indicated that we were 1250 feet above Lake Superior and I was told that there are views to it on a clear day. Here is Jamie’s description of the hill: 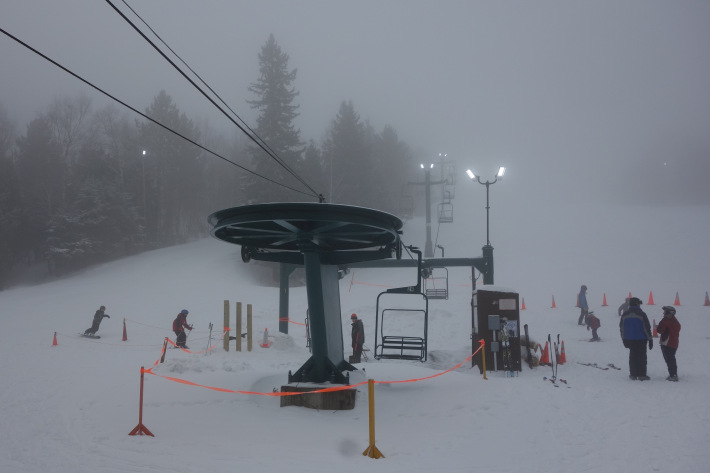 “It’s smaller than it looks but there are at least three ways down the hill. There’s a bunch of trees down the middle, with some bumps. The other side has boxes and rails. My skis were the first skis on a run through the trees. There’re not a lot of runs but it’s pretty good for beginning and intermediate skiers.”

That’s an accurate description although I would add that it’s a beautiful spot, especially the morning of my visit with evergreens surrounding the hill flocked in fresh snow. It’s not a big hill but it is bigger than Mount Como and big enough for the chairlift, recycled from a local ski area that upgraded its equipment. The city of Duluth helped to get it installed at Chester Bowl, replacing the rope tow. Thom told me that the installation of the chairlift marked a turn-around in the popularity of the ski area.

Later, I sat down in Thom’s office in the chalet. He explained that when city budget issues threatened to shut down the program in 2008, the CBIC stepped up to operate the program. The CBIC has maintained attractive programming, does year-round fund-raising and has built a community that includes individuals and local business. For example, the season pass allows its members to get some big hill runs with day passes to nearby resorts such as Spirit Mountain. 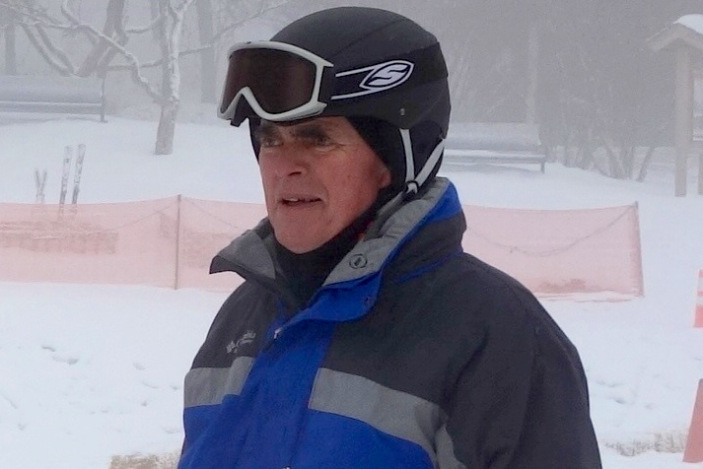 As Thom related Chester Bowl’s history it became clear to me that he is the keystone. He has worked on the hill for over 30 years and has learned through trial and error what works. He actually retired from Duluth’s Parks and Rec department when budget cuts were announced but came back to manage this program, employed by the CBIC. He does it all: supervises the staff to run the ski lift and teach lessons; he manages the volunteers; plans events and is trained as a National Ski Patroller. He is the go-to guy for wrist splints. 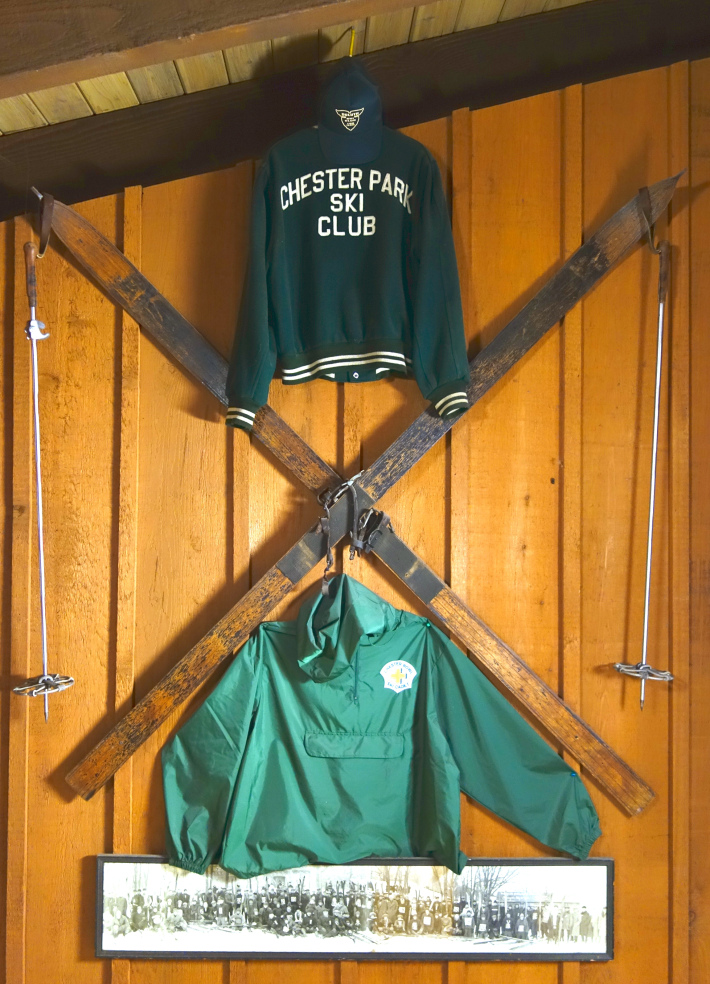 Thom is talking retirement in a few years (he’d like to get some time in winter to ski out west) and the program is actively mentoring in the next generation. The Ski Cadet program at Chester Bowl is a volunteer program for kids eleven and up. They help teach ski and snowboard lessons and maintain the hill. They are trained during workshops that not only drill them on their hill duties but teach things like ski and board tuning. Best of all they get to wear green jackets bearing a Chester Bowl Ski Cadet patch while on duty. I eyed those jackets hanging on a coat rack in the chalet as we left. They are pretty cool.

(All photos by Jack Steinmann)