Life doesn’t always work out according to plan. My plan, as regular readers of this column may recall, was to be in Vietnam this week, sunning myself on a deserted beach somewhere near Hoi An. But a little medical hiccup at the last minute has postponed those plans, though we’re still planning to leave sometime soon.

Plan B was to write about the new Cuban Corner restaurant at 4th and Lake. I had been there a couple of times before, and enjoyed the lunch specials — but when I biked over for lunch yesterday, the place was dark and there was a big sign in the window that said Restaurant for Rent. Another prime example of things not working out according to plan.

Of course, the place to go for Cuban cuisine in the Twin Cities, breakfast, lunch or dinner is Victor’s 1959 Cafe at 38th and Grand, but I was on my bike and hungry. So I locked up my bike and wandered down the block to Taqueria El Monarco, 311 E. Lake St., which has a sign in the window advertising $5 lunch specials — including your choice of a burrito, five tacos, or a stuffed torta, Mexico’s answer to the sub sandwich. The place is tiny — long narrow tables along one wall, an open kitchen along the other, and just enough space between them for customers to stand at the counter and place their orders.

The $5 torta special comes with your choice of any of the meats on the steam table — carnitas (slow-cooked shredded roast pork), asada (grilled beef), chicharones (pork rind), chicken or pork in a salsa verde. I opted for the carnitas, and got a big bun spread with mayonnaise and refried beans and stuffed with generous quantities of pork, lettuce, tomato and avocado. For an extra 99 cents, I turned it into a torta combo, which added chips, salsa, and a soft drink. Very tasty, and so filling that I brought half my sandwich home. 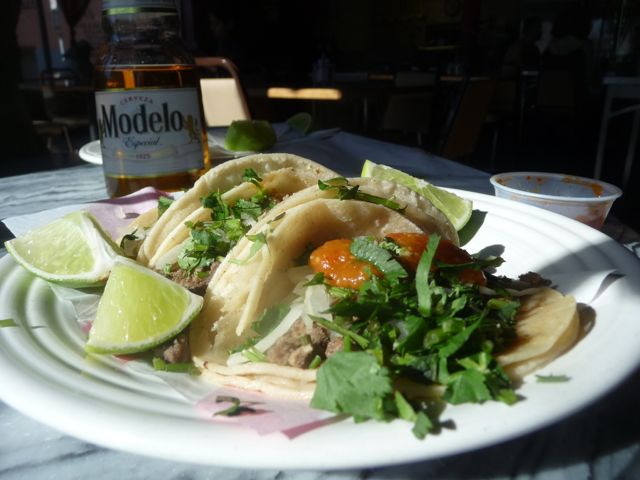 I didn’t try the five-for-$5 tacos at Taqueria El Monarco, but a dozen blocks east, the Guayaquil Restaurant, 1526 E. Lake Street also has a sign outside their door offering several different kinds of tacos for $1 apiece. (I don’t know whether there is a taco price war going on, but I have seen ads from several local Mexican restaurants offering taco specials for $1 or $1.25 apiece.) Guayaquil’s tacos aren’t very large — you will probably want to order at least three — but the chicken and beef tacos I sampled, served inside a double layer of corn tortillas, and topped with chopped onions and fresh cilantro were just fine, especially when accompanied by a bottle of Modelo ($4).

Guayaquil is a city in Ecuador, and the menu is mostly Ecuadorian. On weekends they feature karaoke, and some soup specials, including cow’s foot soup, and a delicious seafood soup ($10.99), which Carol ordered. It’s a meal-sized bowl of savory broth brimming with shrimp, squid, mussels and smaller clams, and topped with a generous section of snow crab, from which the meat was easily extracted. 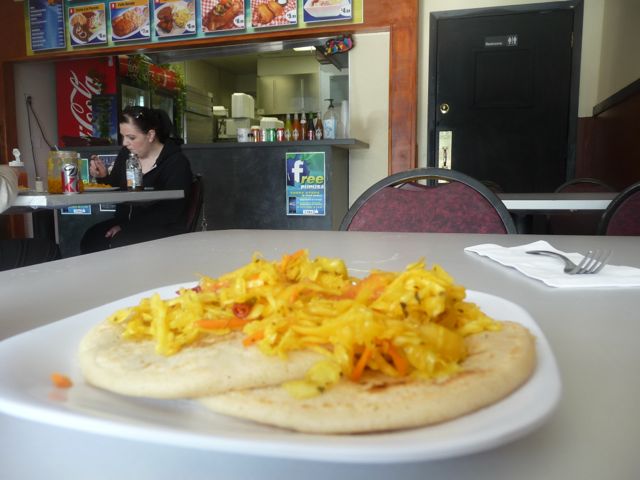 A couple of doors down from the Guayaquil is the Pupuseria y Restaurante El Centro, 1532 E. Lake Street. Pupuserias are the Salvadoran equivalent of taquerias, except that while tacos are served with meat or seafood wrapped in thin corn or flour tortillas, and topped with onions and cilantro (usually), pupusas are thick cornmeal cakes with the meat, beans or cheese — or some combination thereof — stuffed inside. I tried a couple of different kinds — one stuffed with a combination of beans, cheese and chicharron (pork rind), $2.50, and another with cheese and loroco, an aromatic edible flower that is native to Central America ($2.75). Interesting flavor, subtle and difficult to describe. The pupusas themselves are rather bland, in a comfort food kind of way, but what brings them to life is the accompanying curtido, a spicy pickled slaw.