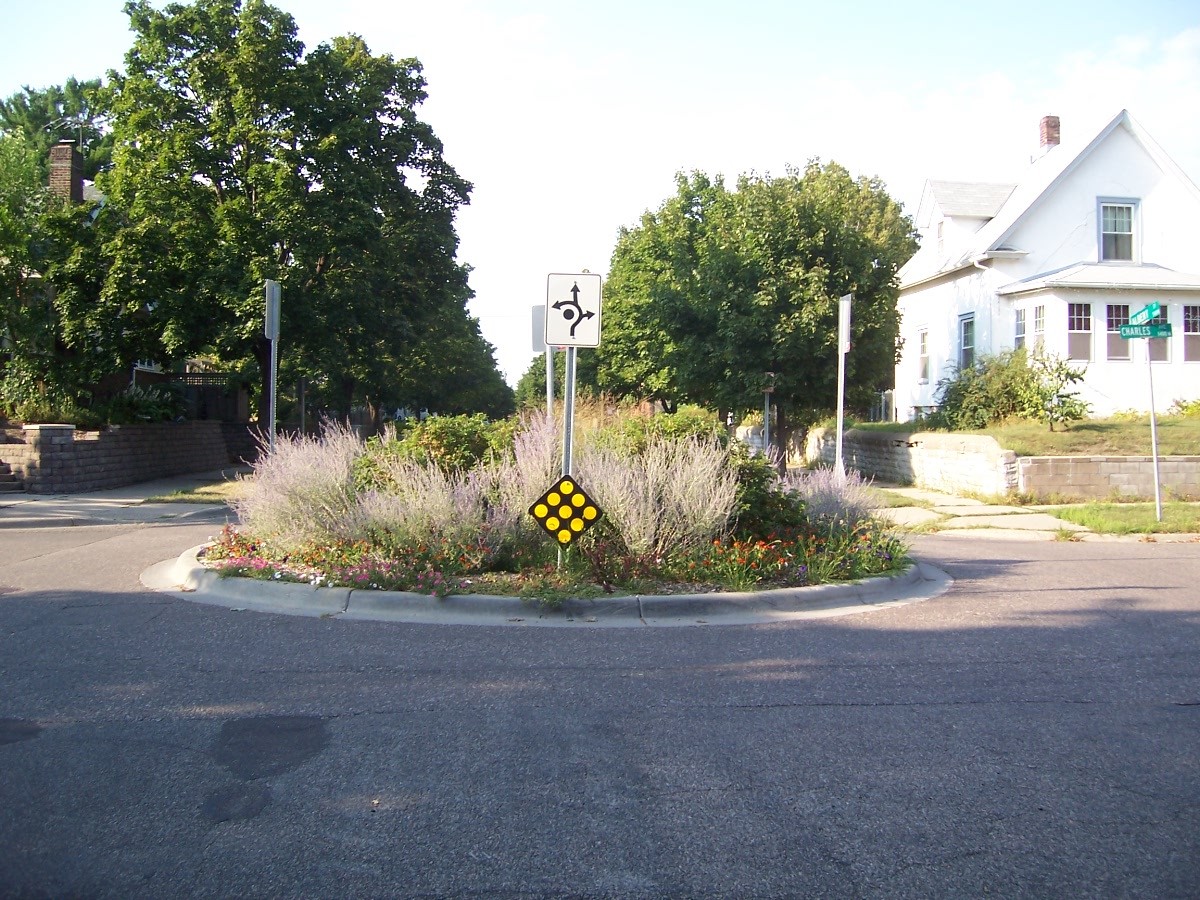 From “a dream come true” to “protection for one street, increased risk for the other streets,” plans to change traffic flow on Charles Avenue in St. Paul’s Hamline-Midway neighborhood have sparked controversy and discussion for two years. On Wednesday, September 5, the city council will consider what could be the final proposal, and will hear what residents and neighbors have to say. Most people favor the general idea of traffic calming, but some loudly oppose the plan to add a median and ban left turns at Charles and Snelling.

I asked local residents on E-Democracy—an online community forum—to share their opinion on the proposed re-design. I also walked up and down Charles Avenue in the early evening—talking to any and everybody willing to share their views. In all, I received responses from 24 people—18 were fully supportive, two were fully against the project, and four were only against the portion of the project that involves prohibiting left turns from Snelling to Charles. Here are some of their comments — you can read the entire discussion here.

Erin Pavlica calls Charles a “superhighway,” and says, “I encourage people to come sit at my corner at Charles and Griggs and watch just how many pissed off motorists come flying off Lexington. They race from stop sign to stop sign and turn up Hamline.”

Dave Olson thinks the plans are great, but are “being applied to the wrong street. Yes, the bikes are being forced there by the light rail,but there is comparatively little traffic on Charles to begin with.” He’d like to see more attention paid to calming traffic on Thomas and Minnehaha.

What is the plan?

Charles Avenue runs east and west, and is just two blocks north of University Avenue and the Central Corridor light rail line. Anticipating increased traffic as University Avenue loses lanes, two years ago, a group of neighborhood volunteers from the Frogtown and Hamline Midway neighborhoods came together to form the Central Corridor Friendly Streets Initiative (CCFS). Until this past spring, the group worked independently to create a vision for a safe, calm alternative travel route that serves the needs of those living in and passing through the area. After a monumental community engagement process, this past spring CCFS partnered with the City of Saint Paul with a proposal to re-design Charles Avenue.

The re-design would run along a 3.5 mile stretch of Charles Avenue from Aldine to Park Street. The project would include pavement markings, bump-outs, landscaped roundabouts, as creating concrete pedestrian refuge medians and banning car crossings at Marion, Dale, Lexington, and Snelling intersections.

How has the community been involved in planning?

CCFS planned five block parties along different stretches Charles Avenue during the summer of 2011. The parties included free food from local vendors, written surveys, and visuals of possible ways to make Charles a “friendlier” street that attendees could voice their opinion on.

This year, CCFS administered surveys and had these same visuals on display at three community events. In total, they reached 877 community members, received 200 surveys and collected over 2400 opinions on visual ideas for the re-design.

Many survey respondents perceived the street to have too many cars going too fast down the street, making it unsafe for residents and their children. Residents also link a rise in high-speed traffic to light-rail construction along University Avenue. Most were highly supportive of the type of infrastructure changes that are included in the re-design which the City is currently considering.

What’s with the left turns?

As the project moves toward an estimated start of construction next spring, a handful of residents and businesses are beginning to voice their concerns over how the proposed project could negatively affect their lives and livelihoods. The most controversial aspect of the plan involves closing both the southbound and northbound left turn lanes onto Charles Avenue from Snelling. 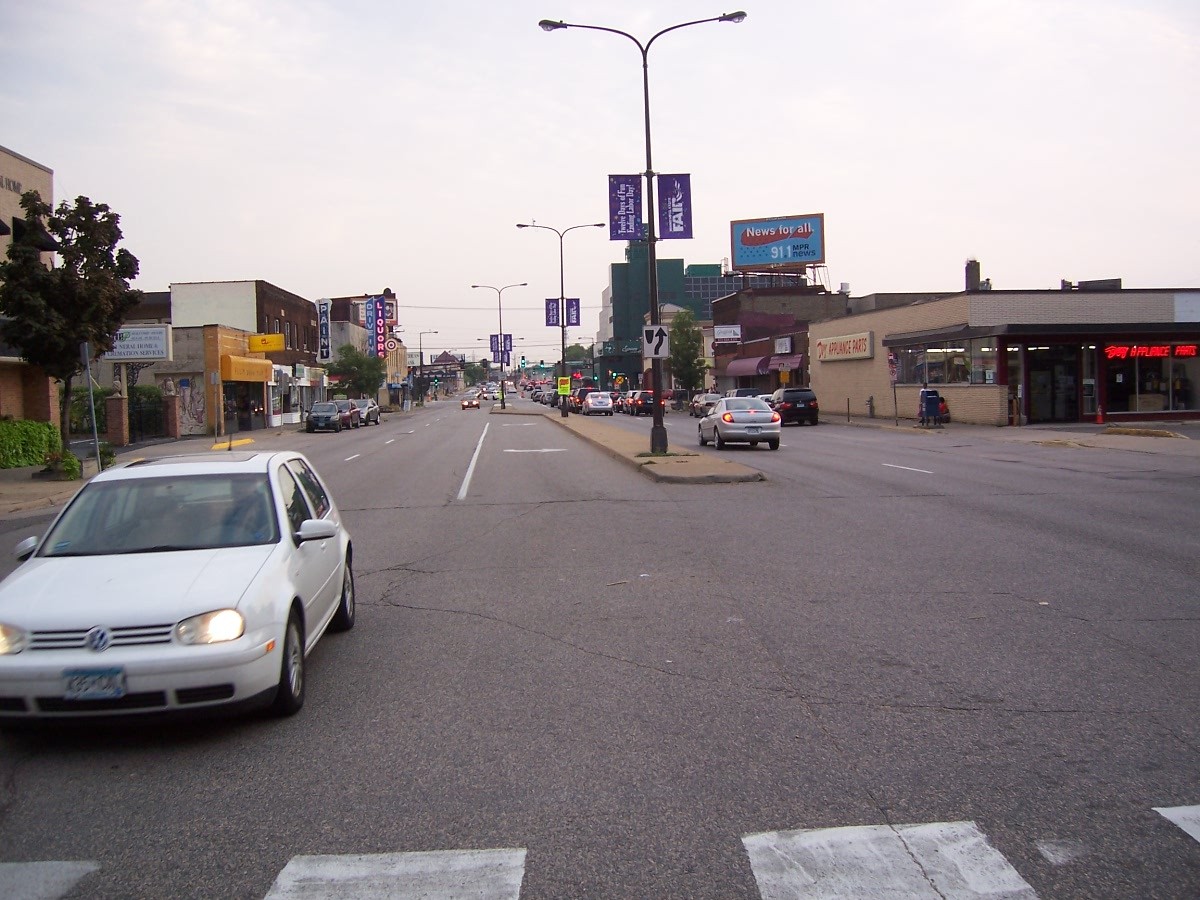 Two long-standing local business owners, Richard Purcell, owner of Holcomb-Henry-Purcell-Boom Funeral Home, and Tim Ellis, owner of Ellis Drum Shop, both worry that closing these turn lanes will make it more difficult for patrons to access their businesses.  Furthermore, Purcell is worried that, “the intersection of Snelling and Charles, going across Snelling Avenue, is a very potentially dangerous intersection for bikes and pedestrians to cross.” Instead, he advocates a bike and pedestrian crossing on either Edmund or Thomas Avenue (both immediately north of Charles), adding “I think there’s a way that everybody’s needs can be met.”

Tim Ellis, owner of Ellis Drum Shop, explains why he is against placing a median at Charles and Snelling Avenue.

Nearby Charles Avenue resident Aria Fernandez understands the concern over consumer access, “I think the businesses have a legitimate concern, but I think it could be solved with signs. I’m happy about the project.” Purcell does not believe signs directing customers to turn two blocks earlier at Thomas Avenue would be effective. However, both Ellis and Purcell are supportive of all other parts of the Charles Avenue re-design proposal.

Down the block from the funeral home, resident Jerri Vogel supports restricting left turns onto Charles Avenue. She says that her block has seen a huge increase in traffic since light-rail construction began, “I hate the fact that there are so many cars now. It doesn’t feel like a family environment anymore. I’m considering moving because the traffic is so bad.”

Proponents of the proposal agree with Vogel, viewing a safe pedestrian crossing across Snelling at Charles as crucial to the goal of calming traffic throughout Charles. Emma Pachuta, the Neighborhood Programs Director for St. Paul Smart Trips, states, “bike and pedestrian counts show that about 3,000 people walk and bike across Snelling during rush hour every single day (that’s just between 4 and 6 pm).  Snelling also has some of the highest rates of bicycle and pedestrian accidents in St. Paul. This highlights the importance of offering safe crossings for these modes of transportation at as many intersections as possible.” Lars Christiansen, a founding member of CCFS, adds that making those who would otherwise use the proposed safe crossing travel a block or two off Charles to cross Snelling, “is a much greater burden than asking a motorist to take a left a little earlier or later.”

Where would the traffic go?

A few residents worry that drivers will choose other, busier streets if Charles Avenue becomes “calmed.” The City of Saint Paul does not expect this to be a problem because the relative traffic volume on Charles is considerably less than nearby thoroughfares. Currently, the portion which would be re-designed under this project carries between 400-600 vehicles each day, whereas the busier, parallel Thomas and Minnehaha Avenues receive between 2,000-4,000 and 2,000 and 8,000 vehicles each day respectively.

Where’s the money coming from?

The Charles Avenue re-design will not raise taxes for residents of St. Paul. According to Paul Martin, Assistant City Engineer for St. Paul, the project has a budget of $750,000. Most of this ($450,000) comes through a Federal Motorized Transportation Grant. Additional funds come from MnDOT ($50,000) to fund portions of the project on Snelling Avenue, which is a State Highway, and from City Capital Funds ($250,000). City Capital Funds come from a combination of Capital Improvement Bonds and STAR Funds, which city sales tax generates. All of these funds have been earmarked for projects like this one. If these funds weren’t applied to Charles Avenue, the City would use them elsewhere.

Want to voice your opinion?

The city of Saint Paul is holding a public hearing on the project at 5:30 PM on September 5th in council chambers at City Hall. The address is 15 West Kellogg, Saint Paul. If approved, the City of Saint Paul expects that construction would begin next spring and be completed by late summer next year.