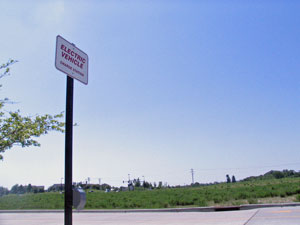 An electric vehicle charging station at a Kwik Trip store in Chanhassen, Minnesota.

A convenience store chain is installing free electric vehicle charging stations at stores in three Midwest states. But will the stations – essentially standard household outlets with a sign attached – really make a difference?

The family-owned Kwik Trip chain is installing the stations at all its new stores, a total of 25 so far in Wisconsin, Minnesota and Iowa. But the outlets only provide 110 volts, which, charging for the few minutes it takes to grab coffee and use the bathroom, would barely get someone out of the parking lot and down the block. Charging for an hour at that voltage might allow a typical electric vehicle to run three to five miles.

Kwik Trip officials and electric vehicle proponents acknowledge the limitations, but say the charging stations are a significant symbolic move and also lay the groundwork for more powerful charging stations in the future. With the infrastructure laid for 110-volt stations, Kwik Trip spokesman Dave Ring said, the company can more easily upgrade the stations to higher voltage if demand increases.

‘Ahead of the curve’

Charging facilities for electric cars are broken up into three tiers. Charging stations with 110-120 volts are considered Level 1, 240-volt chargers are Level 2 and much faster-charging stations of about 480 volts, with direct rather than alternating current, are Level 3. The 480-volt stations can recharge 80 percent of a typical electric car’s battery within half an hour, though these stations are expensive to install and not all electric cars can handle the voltage.

The Kwik Trip charging stations are rarely used, Ring said, “but we want to be ahead of the curve instead of reacting to it.”

Ring said Kwik Trip did not get any government subsidies or tax breaks for the charging stations, though they might seek such incentives in the future, especially if they install more expensive fast-charging stations.

Ted Lowe, a member of the Fox Valley Electric Auto Association in northern Illinois, compared 110-volt charging stations like Kwik Trip’s to “filling your gas tank with a straw.” Nonetheless, he said charging stations located throughout urban and suburban areas are key to encouraging people to drive electric cars. He said such stations help people change their prevailing habit of driving hundreds of miles before refueling.

“If you’re just going from home to work to school and back you don’t really need that much range,” he said.

The availability of charging stations is widely seen as a chicken/egg issue. There is not a large incentive for private companies to install charging stations – especially more expensive high-voltage ones – until more people have electric cars; but people are less likely to buy electric cars if they aren’t confident they can easily recharge them on the go.

Cities including Chicago, Kansas City, Madison, and St. Paul have installed or are in the process of installing electric vehicle charging stations of various voltages in public parking areas and on private property. On the West Coast, public and private entities are cooperating to build a “Green Highway” of charging stations from San Diego to Vancouver.

In Chicago, city officials are installing 280 charging stations, extending deep into the suburbs, where customers can pay for level 2 or 3 charges. Many will be powered by solar panels.

Private parking garages and malls, where cars will presumably be parked for longer periods of time, have also increasingly installed charging stations as pilot projects, though they are still not widespread. It remains to be seen whether many private or government parking areas will offer charging for free or whether customers will pay for the electricity.

“Most gas stations don’t make money on gasoline, they make it on soda and coffee and potato chips,” said Environmental Law and Policy Center executive director Howard Learner. “So it may well be that certain service stations or toll plazas will offer car charging to get people in the store to buy those things. It’s a rapidly emerging market. We expect most people will tend to charge cars at home overnight when (electricity) market prices are lowest. But many will want the convenience of charging during the day.”

Video producer Ben Nelson lives in Oconomowoc, Wisc. near Milwaukee and owns an electric motorcycle and a vintage 1970 electric Citicar vehicle. After a friend told him about the charging station at a local Kwik Trip, he called the company asking for a list of locations. He said Kwik Trip’s charging stations have made him more likely to visit the convenience stores, especially the one near his home that is also near restaurants and a grocery store.

Nelson, who is helping to start a Wisconsin chapter of the Electric Auto Association, said he was impressed Kwik Trip installed the stations without any fanfare.

“Usually any time a new electric vehicle charging station goes in it’s a big thing with TV cameras, the whole nine yards,” he said. “One thing I really love about Kwik Trip is that they just went ahead and did it. It wasn’t a public relations thing for them.”

Paul Scott, vice president of the group Plug In America and owner of an electric car in southern California, said he thinks more convenience stores and gas stations will follow Kwik Trip’s lead. He said he himself patronizes a grocery store specifically because it has a level 2 charging station. A 110-volt station, he said, “might get you a mile in 10 to 15 minutes of charging.”

“Is that worth it? Personally I would say yes,” he said. “Whenever you have an opportunity to charge particularly when someone’s willing to give it to you for free, you plug in.”

Kari Lydersen is a Chicago-based freelancer and author whose work appears in The Washington Post, The New York Times and other outlets.