During his first trip back to Somalia in summer 2010, Mohamed Samatar, 19, of Minneapolis, expected there to be no electricity and to be in a desert.

“Everything I had in America was there. The only difference is that the weather in Somalia is nicer,” Samatar said.

Shocked by how misinformed he was, Samatar felt compelled to inform the world about what Somalia is really like, and what’s actually going on there.

Somalia hasn’t had a stable government since 1991. In July, the United Nations reported that half the country’s population was in crisis because of a famine. There is also ongoing violence between conservative religious factions and the internationally supported government. UN forces recently returned to the capitol city of Mogadishu for the first time in 17 years. 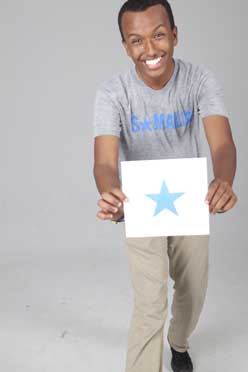 “When a person pictures Somalia, they immediately picture pirates and bony children with big, round bellies,” said Samatar, a University of St. Thomas theater major.

Right: Mohamed Samatar, 19, of Minneapolis, wants to shine a light on Somali stereotypes and change them. (Photo courtesy of the American Refugee Committee)

Samatar grew up in South Minneapolis and graduated from Southwest High School in 2010. His style is artistic and hip – reflecting his interest in the arts. His manner is warm, straightforward and he smiles a lot.

After returning from his month-long trip to northern Somalia to visit his grandmother’s farm, Samatar started volunteering for the American Refugee Committee, a nonprofit organization based in Minneapolis that works to help refugees in nine countries. Samatar has been volunteering at ARC for more than a year.

“People have a lack of empathy for the issues in Somalia. When there was an earthquake in Haiti, everyone paid attention to it. The issues in Somalia are an ongoing thing. Unfortunately, so is the lack of people knowing what is happening there,” Mohamed said.

Samatar’s mission with ARC is to harness Twin Cities residents’ empathy, change perceptions in the larger public about Somalia, and to come up with fundraising ideas. He’s working on the “I Am a Star” campaign, which is a global project to raise awareness and money to fight the famine in Somalia, including kits for students to use in school.

One idea he’s working on right now is putting together a concert of Somali musicians living in Minnesota and abroad to show a cultural side of Somalia that’s not always evident in the media.

“The hope is for audiences who are not aware, or haven’t experienced that side, to show there is a human face behind all the conflict going on,” he said.

Therese Gales, the information officer at ARC, said: “It is very rare for us to choose someone as young as Mohamed to work with ARC.”

Gales said Samatar isn’t afraid to propose big ideas and he’s already had successes: He organized a 5K run — “Run to Unite” – to raise money to fight the famine that struck Somalia this past summer. “The run he created was amazing,” Gales said, adding that 400 people registered for the run.

Gales said Samatar is a great spokesperson because he has family in Somalia, has great leadership skills and is a good role model. He’s an important voice to counteract the predominant thinking that Somalia is only home to pirates and terrorism, she said.

Samatar received a full scholarship to the University of St. Thomas and plans to earn a degree in Theater with a concentration in Community and Global Health at Macalester through a program called the Associated Colleges of the Twin Cities. The program allows students enrolled in five colleges – St. Thomas, Macalester, Hamline University, Augsburg College and St. Catherine University – to take courses at any of the schools. St. Thomas doesn’t offer a theater major, which is why Samatar is taking many of his courses at Macalester.

Samatar’s goal for the future is to become an “active citizen.” He wants to use his creativity and artistry to create social change, he said. “If it’s on the neighborhood scale or globally, it’s the same for me,” Samatar said.

“I want to put a positive light on places there is no light,” he said.

Samatar encourages other teens to do the same, even if they feel like they are just one small person. “Ask the question: If you don’t speak up, who will? … We tell ourselves we can’t do anything. There might be a deeper meaning for why you’re in that situation, and to be the person to notice that situation. And you’ll be the person to act on changing the narrative you see.”