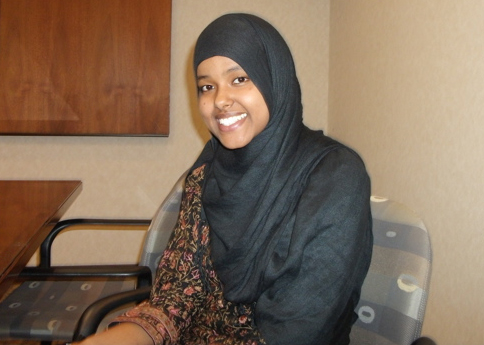 This past spring the Minnesota Idea Open, an online competition for social change, had asked the public for suggestions on their Challenge III question, “What is the best idea to build bonds and work together across cultures and faiths here in your community?” The Minnesota Community Foundation, which created MIO three years ago, believes that our state has become very diverse in cultures and faiths and that we need to build relationships with people across individual differences.

Over 600 people had sent in suggestions to the online contest. An eight–judge panel of media professionals, community and faith leaders narrowed down the winning ideas. Five finalists will receive grant awards of $15,000 or $5,000. The public gets to determine the best idea by watching five short videos of the finalists and then vote May 15-25. “We’ll announce the winning ideas around May 30,” said Kari Ruth, a representative from MIO. “Assuming all the tallying of votes goes smoothly.”

The Minnesota Idea Open is an effort to create a fun and engaging way for Minnesotans to learn about critical issues affecting the state and then the public gets to develop new solution for addressing those issues. The past two challenge questions were about obesity and water issues in Minnesota.

Fatuma Mohamed is one of the five finalists. She has just completed her first year at St. Catherine’s studying public health and business. She has lived in the Twin Cities since 1999, coming from Ethiopia. “I find myself in two worlds. By day I would be a student at St Catherine’s and then I would return home to my Islamic community in north Minneapolis,” said Mohamed.

One year ago as a senior at South High in Minneapolis, she decided to start a group for Muslim women, called Sunnah sisters, to talk about any concerns they had. On weekends, 20 high school or college-age women would come from all over the Twin Cities to meet at their mosque. “When I heard of the Minnesota Idea Open project, I was excited,” said Mohamed. It was what her group had been talking about. “We could be seen and heard,” said Mohamed. The Sunnah sisters could talk about what they were experiencing here in Minnesota.

She has experienced a lot of misunderstanding/fear about the Islamic community since 9-11. The name of her project is the seven-step hidden pearl summer challenge. Mohamed, along with the 20 Sunnah women, will do the Hidden Pearls Project.

Mohamed and the Sunnah sisters will go through a leadership-training program. “We need training to build speaking skills and self confidence, to overcomes shyness,” said Mohamed. The women have not been in the public eye before. They will go church-hopping to introduce others to their Islamic world. St. Catherine’s ministry will help connect the group to churches in the Twin Cities.

Their project will include a “walk a mile in my shoes health week,” Mohamed said. “This is big. With everyone out walking we can start to talk about public health and health disparities.”

Her next idea is a pink hijab week. “I want people to experience wearing the headdress; better than just talking about it. I want no mystery about the headdress. Just talking about what this is for us,” said Mohamed. “Other faiths have clothing. Hijab is about being seen and heard for who we are, not about our bodies.”

Another part of Hidden Pearls Project would be an Open Mosque Day, inviting others to a mosque to answer all questions. A possible visit would be Dar al-Farooq on 17th Avenue in Minneapolis.

Their sixth project idea, “save a school save a community,” is an invitation to community members/leaders of different faiths to North High School in Minneapolis, to talk about making education a priority in their neighborhood, lowering the dropout rate and stopping gang violence and drug addiction. “There is no jogging; children do not play outside,” said Mohamed. “It would take the whole community to save the community.”

Lastly, her project would start a daily or weekly show for youth run by youth. Mohamed feels that media is a powerful tool to get your message across. “It can’t happen without the media,” said Mohamed. She will create a documentary on all the seven steps of the Hidden Pearls Project.

“These grants will help kick off these ideas,” said Kari Ruth. “The project will be from 10 to 12 weeks.”

To watch all videos and vote, go to www.mnideaopen.org/challenge3.