A major transportation funding package OK’d Thursday in the House Transportation Finance Committee appears unlikely to become law, with DFL leadership saying the bill lacks the broad coalition needed to pass it off the floor.

The committee signed off on an amended bill, sponsored by Rep. Frank Hornstein (DFL-Mpls), that would raise an estimated $550 million annually through a new wholesale fuel tax and expanded metro area transit sales tax. The boost in funds are needed, advocates say, to maintain the state’s aging roads and bridges and undertake new highway, rail and bus projects across the state.

“This is a real opportunity to invest in roads, bridges, transit and our future,” Hornstein said.

Passed by a 9-6 roll call vote, HF2395 will now head to the House Taxes Committee.

The bill would supplement the state’s per-gallon gas excise tax with a gross receipts tax on wholesale fuel purchases and raise a quarter-cent transit-oriented Twin Cities metropolitan area sales tax to 1 cent — while expanding it to all seven metro counties – to fund new transit projects across the metro area. Currently, Scott and Carver counties do not collect the tax.

Despite bipartisan acknowledgement of the state’s need for new transportation dollars, House and Senate DFL leadership have signaled their reluctance to pass a transportation-related tax increase this year.

That, coupled with opposition from Republicans and the Minnesota Chamber of Commerce, appears likely to doom the bill this session.

“Without the support of the business community and Republicans, a comprehensive transportation package will not progress any further this session,” House Speaker Paul Thissen (DFL-Mpls) said in a statement Thursday. 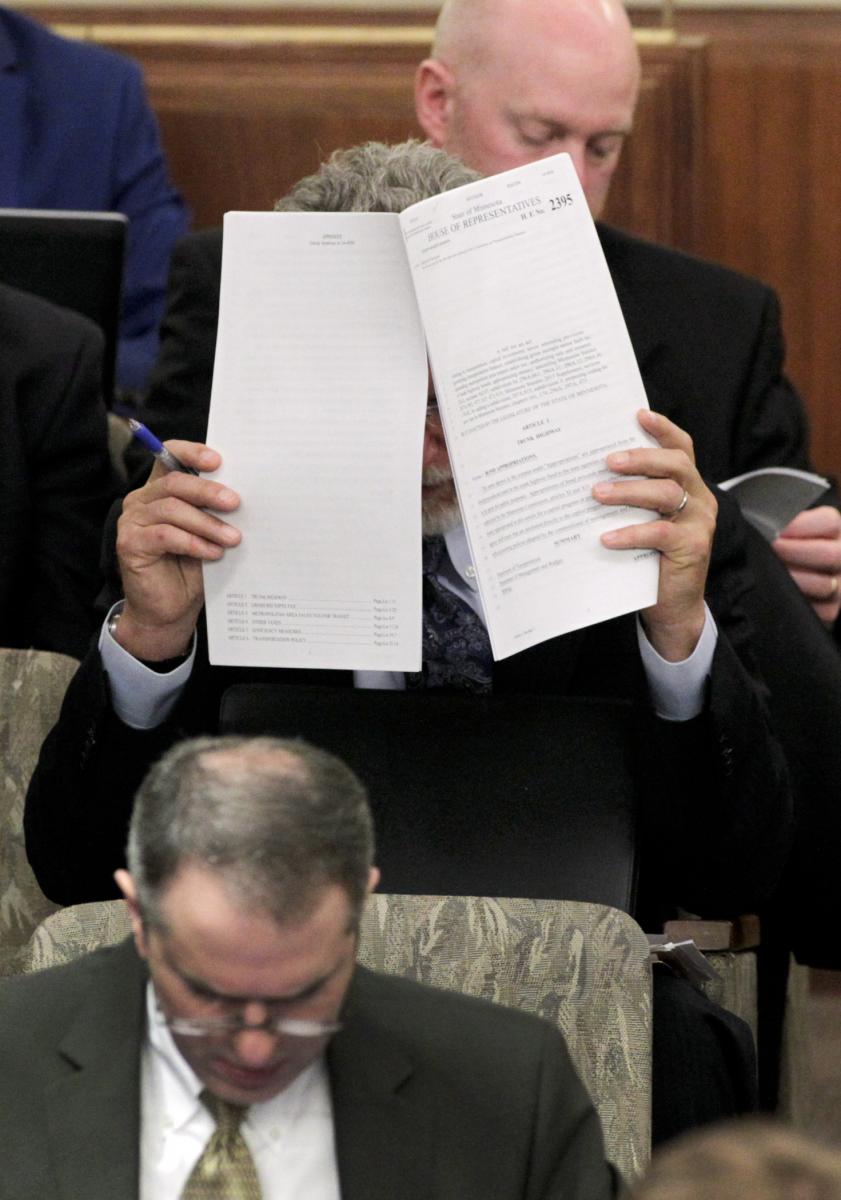 Left: Scott Peterson, director of government affairs for the Department of Transportation, looks through the omnibus transportation finance bill, HF2395, as members go through amendments during the House Transportation Finance Committee March 20. (Photo by Paul Battaglia)

The legislation mirrors a proposal put forward earlier this year by Move MN, a transportation advocacy group comprised of 150 mayors, cities, counties and business leaders that has lobbied lawmakers to ratchet up transportation spending to help keep the state economically competitive.

In its original form, HF2395 would have raised an additional $700 million in annual revenue for transportation. An amendment put forward in committee by Rep. Ron Erhardt (DFL-Edina), slashed that figure by roughly $150 million by proposing to lower the state’s existing excise gas tax by 5 cents per gallon.

The bill would also reallocate $32 million in annual revenue from collection of the state’s motor vehicle lease tax to road projects in the metro area and Greater Minnesota transit programs.

Republicans on the committee said they understood Minnesota’s growing list of transportation needs requires attention, but took issue with the tax increases in Hornstein’s proposal.

“Pouring massive amounts of new funds into expensive, deficit-ridden transit systems that serve less than 4 percent of the population doesn’t strike me as a reasonable or prudent way to spend hundreds of millions of dollars of taxpayer money,” Beard said in a statement.

A year after failing to garner support to pass an increased gas tax and transit sales tax, Hornstein reiterated his belief Thursday that catching up to the state’s ballooning list of transportation needs won’t get any easier.

“Transportation problems don’t go away,” he said. “They just get more expensive.”