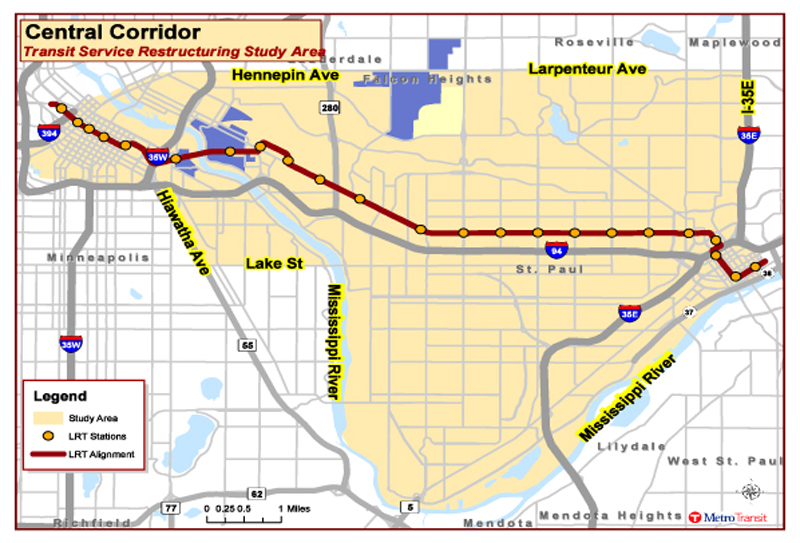 A series of public meetings that ended in mid-March launched discussion of changes to bus routes in the Twin Cities, which will take effect in 2014 with the opening of the Central Corridor light rail line. A 98-page Existing Conditions Report looks at about two dozen existing routes, their current ridership, speed and scheduling, and at deficiencies in the bus system, particularly in substandard frequency on some lines and on lack of north-south connecting routes.

The report calls for more frequent service, especially on evenings and weekends. It also notes the need for some north-south bus service between Snelling and Dale in St. Paul, because standards call for bus lines to be no more than one mile apart, and the current Snelling and Dale buses are two miles apart. One way to fund increased north-south bus service would be by cutting frequency of bus service on University Avenue itself.

Comparing the Central Corridor LRT, which will be called the “Green Line,” to the existing Hiawatha light rail, the report concluded:

Connecting bus service will be much more critical to the success of the Green Line than has been the case with the Hiawatha or “Blue” Line. This is because the critical difference between the Central Corridor and the Hiawatha Corridor is that Hiawatha is not strictly an urban corridor, but a hybrid urban/suburban corridor with significant park & rides at most of its suburban stations. Access by automobile to the Hiawatha Corridor line is significant, but will be insignificant in the Central Corridor Study Area. Every effort should be made to achieve the ridership goals for the Green Line without the undesirable impacts of unsanctioned park & riding (or “hide and riding”) near the Green Line stations along University Avenue. Access by foot, by bus, and by bicycle must be the rule along the Green Line.

While the study does not make specific recommendations, the next step is development of a “concept plan” by May. In June, public hearings and meetings for public comment will be scheduled, with comment review and revision of the plan scheduled for July-September. The final plan is scheduled for completion by the end of November, with implementation in 2014.

If you missed all of the March meetings, don’t worry — it was mostly show and tell with big pictures on easels. Want to weigh in on whether the #50 route should end, or how often the #21 should run? Go to metrotransit.org/CentralStudy or email centralcorridorstudy@metrotransit.org.

There’s a short survey at the Central Study website, which asks where and when you ride.

According to the guidelines set out in the study, the area within a mile north and south of University Avenue (Transit Market Area I) should have:

For most of the rest of the area studied (Transit Market Area II), the standards call for: