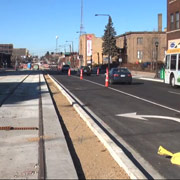 At the busy corner of University and Snelling Avenues in St. Paul, there’s a sign in a store window reading “We Survived Blight Rail.” It’s a punny swipe at Central Corridor transit construction work that disrupted traffic on University for most of this year.

Problem is, equating modern light rail with blight, especially the Central and the widespread urban redevelopment it has already sparked three years before trains start running, could hardly be further from the truth.

Merriam-Webster defines blight as “a deteriorating condition” and gives as an example, “Expanding urban sprawl is a blight on the countryside.” Dozens of new residential, commercial, office and arts developments are springing up along the Central Corridor, many in once-blighted historic buildings. These transit-oriented improvements in the compact heart of the Twin Cities also ease pressure for development that blights exurban greenfields.

The Metropolitan Council lists 38 private projects recently completed, underway or in planning along the light rail corridor, including more than 5,100 new housing units whose value will be enhanced by convenient connections to both downtowns and the University of Minnesota’s Minneapolis campus. The tally doesn’t even include large Midway-area apartment developments such as the Metro and the Lyric that opened before this year. Nor does it count smaller efforts such as the blighted rental duplex a friend of mine refurbished a block off University.

Just down the street from Minnesota 2020’s offices, Exeter Realty is turning a vacant 1917 mattress factory into 104 loft apartments. “We would not be there trying to do something with that property had it not been for the light rail line,” said Exeter Chairman Jim Stolpestad. “University had to be redone.”

University and Snelling is one of Minnesota’s most congested, polluted intersections. At the junction of a state highway and a major county road, it is chronically short of parking for its many storefronts. Before long, however, the merchant with the sign in the window can complain all the way to the bank as light rail boosts pedestrian bustle along the de-blighted Central Corridor.