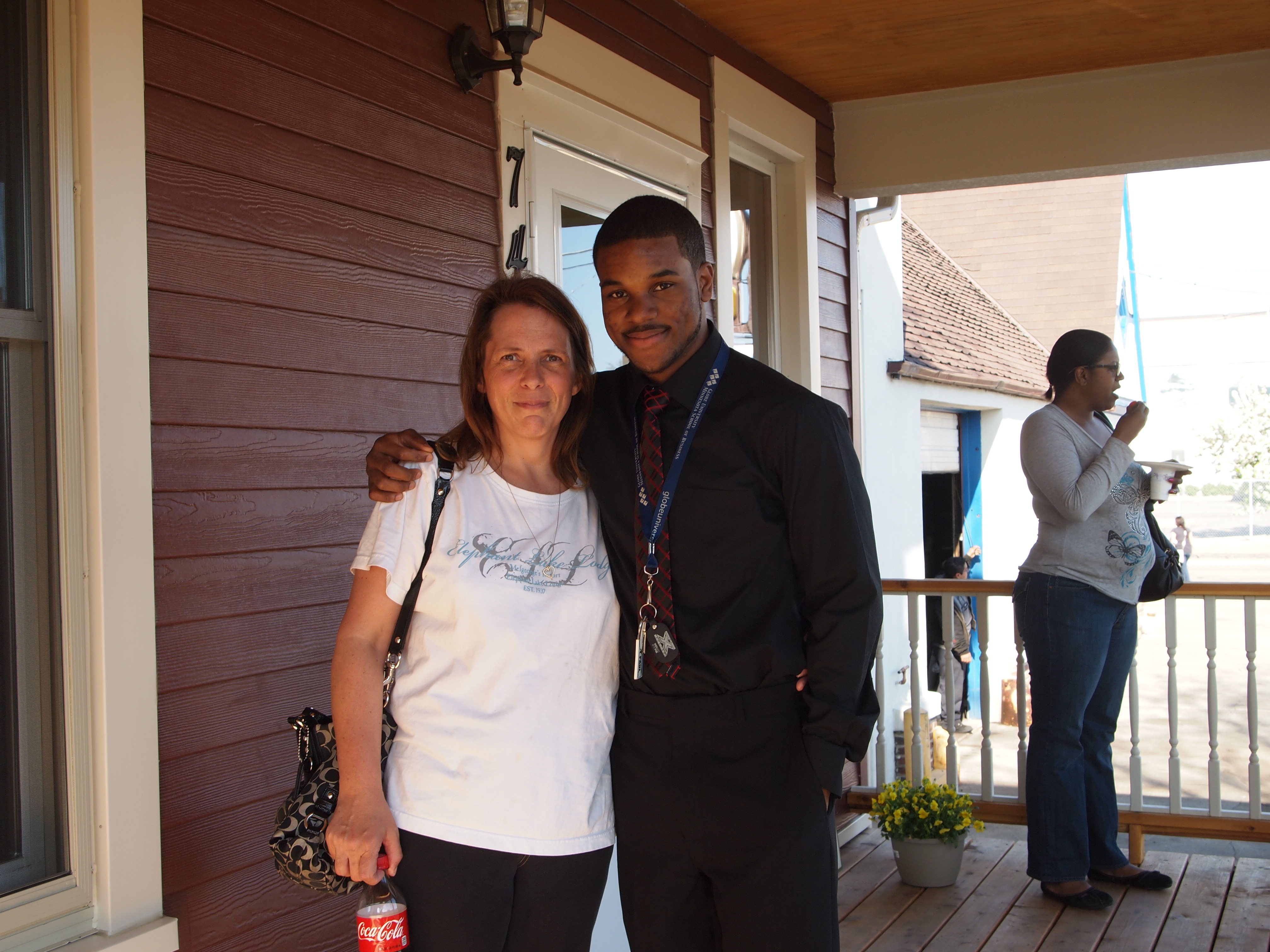 Joanne Nguyen, Frogtown homeowner, with Quijuan Bankhead, a neighbor, at an open house celebrating completed renovation of 749 University Avenue, a duplex that will be rented by Greater Frogtown CDC.  (Photos by Margo Ashmore)

“Our property values are going to go back up. And our transportation expense is going to go down. This is our ticket,” Joanne Nguyen declared during a tour of 749 University Avenue, a  duplex renovated through the Greater Frogtown Community Development Corporation (GFCDC). “With this light rail, our property values are already going up. People thought we would want to sell out for little money and were fighting to get out of the neighborhood.  Well, I’ve been here 21 years and I’m fighting to stay in the neighborhood.”

The duplex project, funded in what’s become the usual non-profit fashion, with several sources and partners, is right on the Central Corridor light rail line that’s coming through Saint Paul. The property will be held in Greater Frogtown’s rental portfolio. It’s one of five Saint Paul homes to be featured on this weekend’s Minneapolis & Saint Paul Home Tour to illustrate what’s going on in the corridor. And to show off two gorgeous original wood built-in buffets. Saint Paul boasts 28 of the Tour’s 63 locations.

Down the street, Model Cities, which offices at 849 University, will open its property at 691 Aurora Avenue for the tour with partner Aurora St. Anthony Neighborhood Development Corporation. They are finishing up selling ten homes renovated in the MCASA Homes program, to moderate income and first-time homebuyers, at or below 80 percent of the Area Median Income. They’ve committed to renovate five more, next year. MCASA Homes offers conventional sales or lease-to-purchase and contract-for-deed options to give the purchaser time to resolve credit and debt issues.

Brenda Bailey, director of real estate development for Model Cities Community Development Corporation, said that while they could operate anywhere, the funding they receive, largely from the City of Saint Paul, focuses their work on one census tract, the area within a few blocks of Maxfield school, in the Promise Neighborhood. “The idea is to build a healthy community where people can live, work, play and go to school and not have to leave the community,” she said.

Model Cities is also lining up funds to build the Central Exchange, a 30-unit building with ground floor commercial with two residential stories above.  The mixed-use, transit oriented development, will sit on one of many now-empty lots cleared when the city declared them blighted, “Category 3” structures.

Craig Johnson, a real estate manager for Model Cities said Central Corridor Light Rail will “create a lot of change. The future is not only environmentally friendly efficient transportation, but also development that will bring a new vibrancy.” University  Avenue was a streetcar line, but I-94 and the attraction of the suburbs left many vacant storefronts for many years.

“We’re already seeing, in [the recently built] Frogtown Square and the Rondo Library, how the rail can create economic opportunities for existing and new businesses to coexist in more space,” on the vacated land. Rail equals housing demand, Johnson said, at higher density than today. “Yet it’s designed so the residents behind can see through to the street,” Bailey chimed in explaining the Central Exchange design.

She said the flavor of the corridor is affordable housing. “At the price of gas, it’ll be great to be able to park the car or not buy a car, yet be able to get to downtown Saint Paul,” Minneapolis, and out to the various suburbs that eventually will connect through the other light rail lines.  “I can’t wait, myself, my pocketbook can’t wait. “

The staff said Model Cities is considering getting into single-family rentals for large families needing three or more bedrooms. One of the attractions of Greater Frogtown’s duplex at 749 University is that its upper unit includes the attic, making it a four-bedroom.

Homeowner Nguyen vouches for the value of family homes, rental or owned, renovated by non-profits with the true renovation cost bought down by various funding sources. She purchased her home, which was on the 1993 Minneapolis & Saint Paul Home Tour, after it was renovated in the Minnesota Urban Rural Homesteading Legislation (MURL) program.

“The MURL program is responsible for my kids going to college,” she said. “It makes me proud. I was a mom with five kids on welfare. It’s nice when they make it affordable,” then a family can concentrate on a better life for the children. “One is going to be a doctor,” she said.

Saint Paul Mayor Chris Coleman, speaking at the 749 University open house, said he misses his Frogtown home, which coincidentally, was on that same 1993 Tour. He said, “we will have failed” if we don’t do this right. “It’s got to be about opportunities for families dependent on the transit line,” he said, and about benefiting a diversity of income levels. 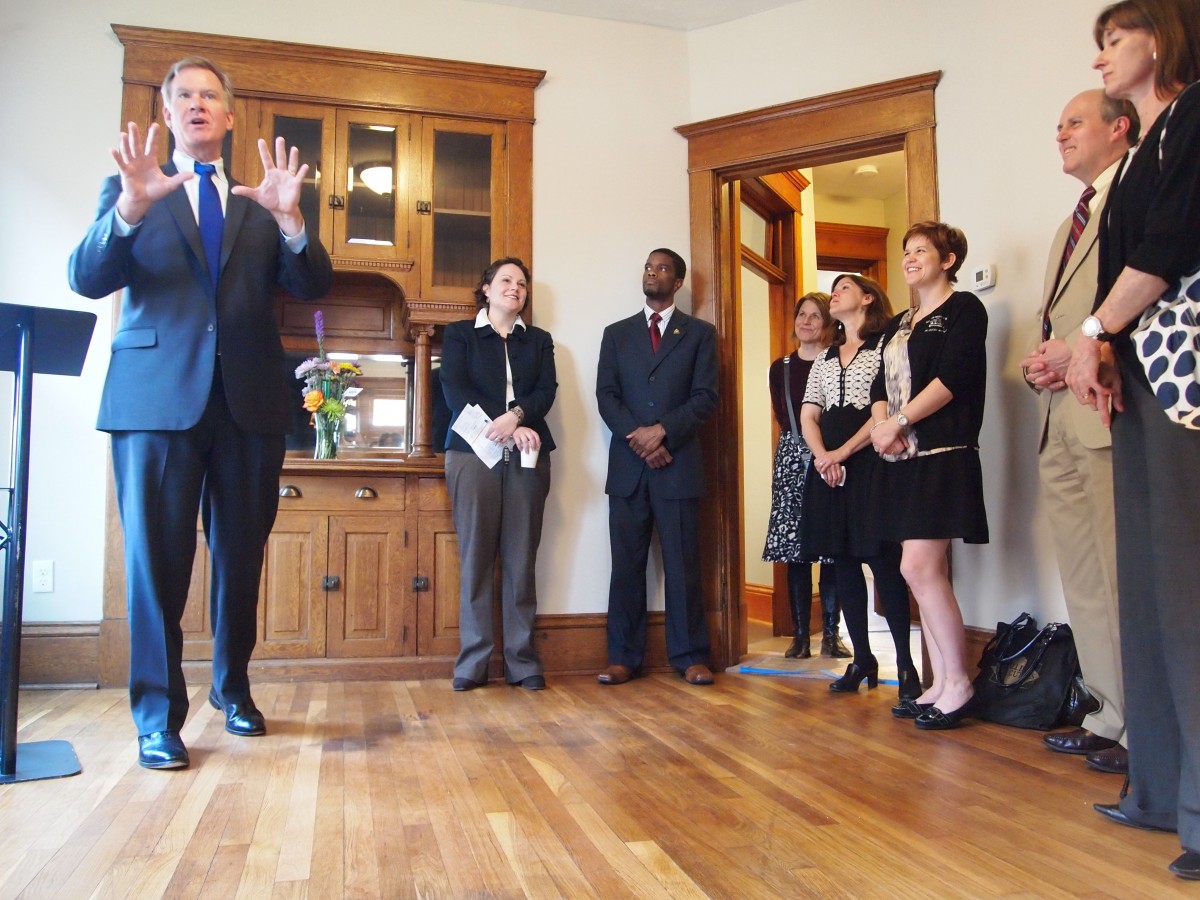 Mayor Christopher Coleman talked about “getting it right,” making the Central Corridor work for people with a variety of incomes. Coleman owned a home in Frogtown in the early 1990s. Looking on, Jill Henricksen of GFCDC, Saint Paul Council Member Melvin Carter III, Becky Errigo of GFCDC, Connie Coleman, Steve Kramer of PPL, and others. (Photos by Margo Ashmore)

Ward One Saint Paul Council Member Melvin Carter III talked about foreclosures, “people who’ve lost their houses and houses that have lost their people… Many of today’s renters are good homeowners who lost their homes. Do they still have a place in the community? Rental has got to be part of the process.”

Within six blocks of the eventual Victoria station on the light rail, the City of Saint Paul chose Spero Properties to renovate 996 Thomas, another duplex, this one for sale, that will be on the Minneapolis & Saint Paul Home Tour; it, too, had suffered foreclosure and deferred maintenance, but had great bones and woodwork.

Two apartment buildings in downtown Saint Paul, which will be engaged in the Saint Paul Art Crawl at approximately the same time as the Home Tour, show other demographics that will benefit from proximity to light rail. The Cosmopolitan at 250 East 6th Street  may be the best place to start a downtown tour from a parking perspective, and several residents will take turns showing their units. It’s a little farther away from light rail construction; it’s within walking distance of the Northern Warehouse which is right next door to a new maintenance facility under construction for the light rail cars.

The Northern is covered in scaffolding as the building is getting some maintenance. That maintenance required a refinancing of the building. Under the cooperative rental structure, all occupants had to re-qualify for their spaces. Some were over the income limit, so the building has vacancies. New occupants have to be artists and approved in a process involving existing residents.

For the art crawl, Northern Warehouse has let non-resident artists show and sell their work in the empty spaces.  Home Tour/Art Crawl visitors can see those units and possibly others in the building, demonstrating what can be done with these largely open spaces.

Light rail displacement factored into one last Home Tour home. The future at the University Avenue building that architect Paul Knutson was renting was so uncertain that he moved his studio to his garage, a renovation process that took about a year to complete. His home and studio, at 1246 St. Albans Street North, near Maryland and Dale not far from Lake Como, are on the Tour at #38.

Nervous about navigating to Central Corridor-proximate tour homes with the roads torn up? The latest word is that Dale Street is open, though a single lane, near and crossing University. From I-94, visitors can access 691 Aurora simply by going west from Dale on Aurora (a block south of University). Cars can cross University at Dale or Lexington. To get to 749 University, park near Sherburne and Grotto (one block north of University, Grotto is just east of the building) and walk the half-block in. Then 996 Thomas is a few blocks north, and a few blocks east, of University, or just a couple blocks east of Lexington.

The Central Corridor-related homes are numbers  50-54 on the Minneapolis & Saint Paul Home Tour.