The high-pitched whir of a wood sander filled the air as a half dozen Gordon Parks High School students, wearing safety goggles and turquoise work coats, carved with chisels and gouges across a large basswood panel. What was emerging from their careful handwork was a cluster of teardrop-shaped leaves, each as tall as the students themselves. Carving the panel is just the first step in the process of creating a work of art that will be installed at the Lexington Avenue Central Corridor Light Rail Transit (LRT) station.

When completed, the wood sculpture will be shipped to a factory that will create a large mold from the hand-carved wood piece. Once the mold is completed, it will go to another business that will pour cement into the mold. The final product, a concrete panel featuring the leaves, will be installed in the LRT station, signed by each student who worked on the piece. It will be part of a design for the station that will include references to the history as well as the natural features of the neighborhood. 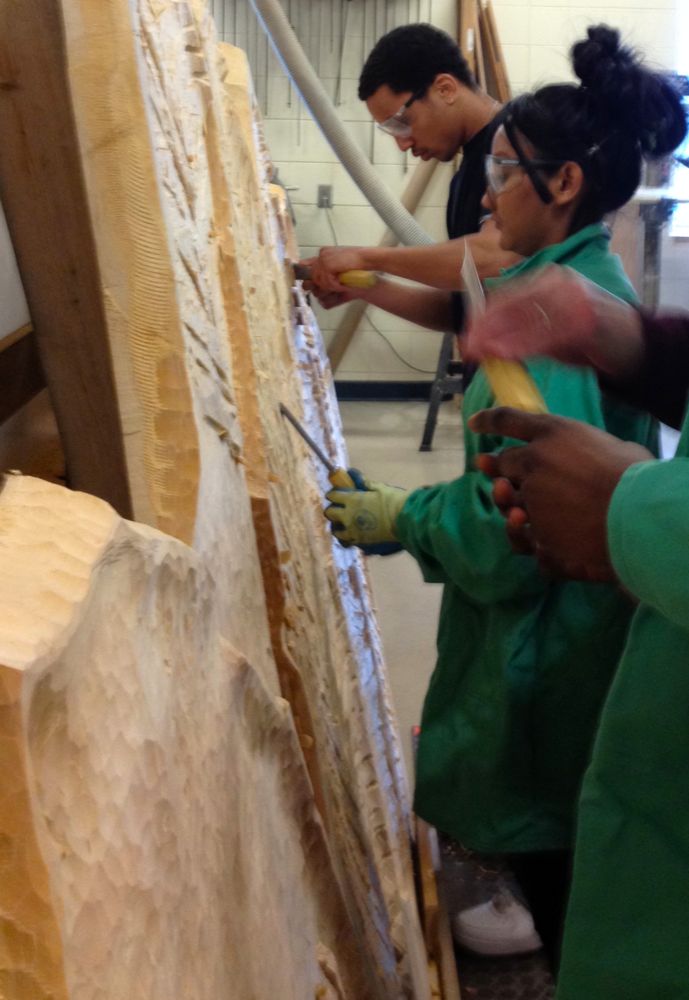 The leader of this work crew is artist Seitu Jones. The visual artist is well-known in the Twin Cities for his many public installations which combine art and nature. He has permanent sculptures in places such as the St. Paul Farmer’s Market, and the Nicollet Mall and his work has been exhibited at the Walker Art Center, the Minneapolis Institute of Arts and in museums nationwide. He has been commissioned by the Central Corridor LRT Project to create art for three of the St. Paul stations. In addition to Lexington Avenue, Jones is working on art for the Dale and Capitol/Rice Street LRT stations.

Each station, has a different theme. The Capitol/Rice Street stop will feature a sculptural reference to the Minnesota Bill of Rights, the Dale Street stop will feature a quilt-like collection of designs inspired by the cultures that have settled in the area and the Lexington station will honor the old Lexington Ballpark and baseball great Roy Campanella who played there. The panels with ash and hackberry leaves is a reference to Lexington Parkway, the only greenway along LRT.

Although Jones produces most of his work in his Frogtown studio, he wanted to share a portion of the project with students at Gordon Parks High School. During a visit in April, Jones worked with students Issac Cryer, Molly Pos, Tim Green, Daniel Denham and Kong Yang. Alex Walton from Leonardo’s Basement, an arts organization, provided expert carpentry assistance. Jones often brings his sculptural projects to Randy Starr’s art classroom. Kathy Kelley, who coordinates community partnerships for Gordon Parks said, “It’s very, very cool–our relationship with Seitu–we’re not only partners, we’re really pretty good friends at this point because we’ve worked with him for so long.”

Jones visited the high school twice a week, over a period of a couple of months this spring. During visits, prior to getting out the tools, he would have time to talk to the students. During a session in April, he took the opportunity to answer student questions as the piece was nearing completion. He explained the timeline for the piece to travel from the high school to the factories for the mold-making and cement casting. Students wanted to know how much the project would cost. He mentioned the price tag, in the thousands, which caused a few heads to shake in amazement. 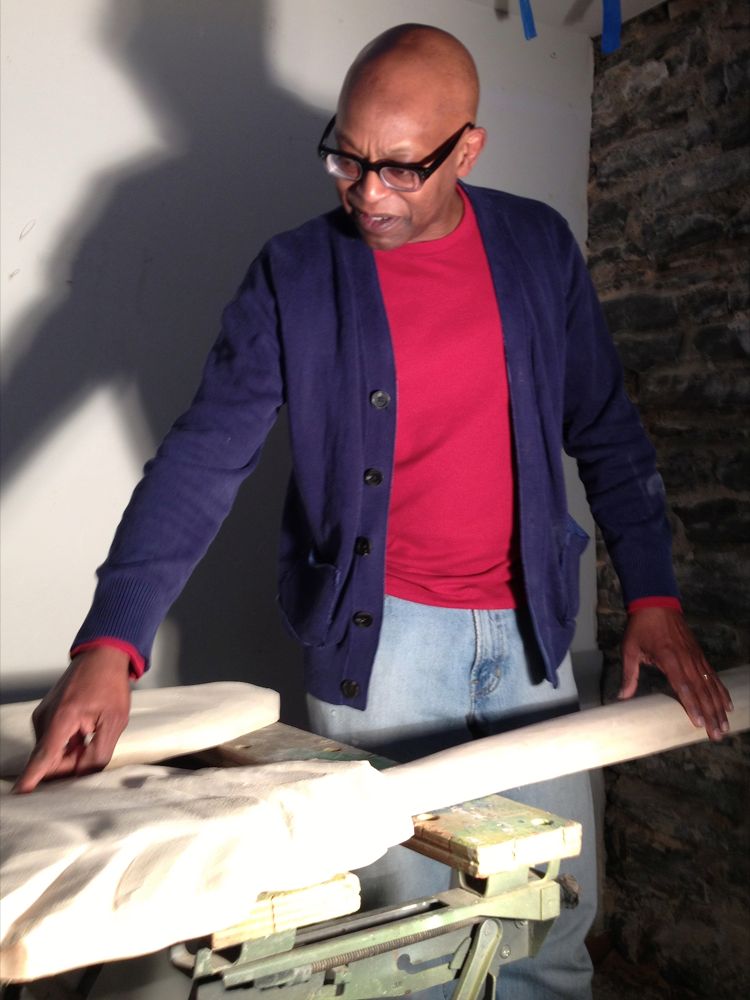 Left: Seitu Jones and the sculpture of Roy Campanella’s hands with baseball bat in his studio

He agreed that it costs a lot of money but, he added, “That doesn’t go into my pocket. I rode here on my bike. I have a bus card.” He proceeded to break down a typical budget for producing a piece of public art like this. He pointed out the costs of everything from tools and shipping concrete panels to hiring a lawyer to help when signing lengthy and complicated contracts. He explained that “the way the art world works” is like running a business, which includes hunting for jobs, working out budgets, planning and documenting art with photos and write-ups. He told the students, ”I’m self-employed, I’m a business person.”

“Seitu is really nice. I never met an artist [before],” said student Molly Pos. She said she was unsure of the project at the beginning, ”At first I thought it wasn’t going to my type of thing. I don’t really like working with all kinds of scary-looking tools. I’m girly. But he’s taught me how not to be scared of it.” She added “I just can’t wait until its finished and I can show it to my family.”

The idea of inviting students to be a part of a public art and part of the LRT project, which currently surrounds the school like a battle zone of broken concrete and bulldozers, is an investment in the future, according to Jones. “They’re starting to understand the idea that they’re part of a legacy. They’ll be able to show their grandkids–so that they can claim ownership.”

Several students interviewed for this article, while pleased to be part of the sculpture project, expressed concerns about the LRT project. They questioned the choice of University Avenue for the route. “It’s going to make it easier for Minneapolis gangs to come to St. Paul,” according to one of the students.

Jones acknowledged that the subject had come up. “I know that those kids in particular expressed a concern about –how accessible is it going to be to folks they might not get along with.” He said, “We sat and talked about that [during] one class period once to try and dispel those kind of misperceptions because — the last thing that you want to be concerned about is people in Minneapolis being concerned about you coming to Minneapolis. He chuckled as he pointed out, “That’s the flip side.” He described asking the students, “What are you going to do when they get here and what’s stopping them now?”

Jones admitted that it is not a simple topic. “To really get into that discussion, you have to peel back so many layers — about what their fears are and perceptions and misperceptions. Those kids are really concerned about their safety and not just from bad kids in North Minneapolis either.”

Jones likes Gordon Parks High’s students because he can relate. Gordon Parks is part of the Saint Paul Area Learning Center, a program for at-risk and underserved students. According to Jones, “These are students who have had a hard time in a traditional school setting. They are there to make up credits or [perhaps] a judge has told them to be there.” He added, “I was a student like that.”

He credits the influence of mentors and innovative youth programs in guiding him. “In the late 60s, early 70s, we were part of a group of young folks and artists who hung around the inner city youth league and The Way in North Minneapolis. We were all part of the black arts movement, the arts and cultural component of the civil and black power movement. There was this rich mix of philosophy, politics, music, and culture that we all got swept up in and one of the things that I learned at that time, through cultural nationalism or maybe from the Black Panther Party, was — you should leave your community more beautiful than you found it.

Jones’s expressed the hope that his work on all the LRT stops serves “to inspire and inform.” He described how, in his research for the Capitol/Rice stop where the Minnesota Bill of Rights will be featured, he consulted with Justice Paul Anderson of the Minnesota Supreme Court. They talked about the “grand civic gestures” that went into building Minnesota’s state capitol and the projects of the WPA.  These were ways, said Jones, “of inspiring people and educating people.” He said, “its all part of civic engagement and really teaching folks how to be citizens.”