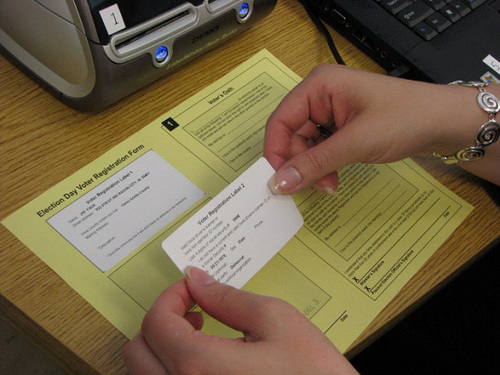 This report downplays the financial costs of the proposed amendment, but its most provocative claim is that “substantial cost savings accrue when photo ID is coupled with electronic poll book technology.” Specifically, in return for an estimated initial investment of $5 million, a cost savings of approximately $1 million per general election could be realized.

Both of these estimates have substantial problems, but even if we accept the numbers, the idea that the proposed amendment could be a net win from a financial standpoint falters on two fundamental problems. First, the projected savings would be possible even without a photo ID requirement. Second, the initial investment is in fact a recurring cost that would be necessary each time the laptop computers reached the end of their useful lives.

The report correctly describes an electronic poll book as “a computer program that replaces the printouts of voter registration information that people are used to seeing on Election Day.” Tellingly, the report admits that “their costs and benefits stand or fall on their own merit; 27 states, including many that do not have a photo ID requirement, use them to sign in voters, update voter history, and look up polling places.” In states with Election Day registration, the electronic poll books can also serve this function, as for example with the “Precinct Atlas” system developed in Cerro Gordo County and used in many other Iowa counties.

It is logically fallacious to attribute any potential cost saving to the passage of the proposed amendment; the same cost saving could be achieved without it. In particular, the bulk of the cost savings shown in the report stem from two areas: the elimination of post-election data entry and a reduction in the number of election judges needed.

Consider a jurisdiction such as Iowa’s Cerro Gordo County where electronic poll books are used without a photo ID requirement. The vast majority of voters come with Iowa drivers’ licenses in hand. They stick the back side of their card under a laser scanner which obtains their name and address from the PDF417 barcode. Assuming they are pre-registered and have not changed name or address, their registration information pops up on the pollworker’s laptop. Seconds later they are checked in and ready to vote. Moreover, the county updates the voter’s history record without any manual data entry after the election. (This contrasts with current Minnesota practice, in which a barcode next to the voter’s signature needs to be scanned after the election.) Likewise, if the voter needs to register or change address, the computer prints out a form that is already mostly filled in. In this particular system, that form later gets manually entered, but an alternative design would allow the data to be directly captured.

Every once in a while a voter shows up without a state ID card. When that happens, the pollworker types in the first few letters of the voter’s name, picks the correct entry from a short list, and asks the voter to confirm their address. This takes a bit longer than scanning a card, but still is quicker than flipping through printouts and only happens a small faction of the time. As a result, the overall savings in labor within the polling place is essentially the same as it would be if every voter were required to have the state ID. And no matter which way the pollworker checks in a voter, the voting history is updated without any post-election data entry. So this cost saving is not an argument at all for passing the proposed amendment.

Moreover, any cost savings from an electronic poll book needs to be traded off against the ongoing costs of that system, rather than only against a one-time “initial investment.” The Center of the American Experiment’s report assumes laptop computers that will last forever. Those computers would be bought once for $5 million and then used forever after, reaping a payback of $1 million per general election, or in other words, every two years. Large organizations that use laptop computers, such as the Internal Revenue Service, typically assume they have a useful life of 3 years. Although some organizations stretch their replacement cycle to 5 years, the extra repair costs in years 4 and 5 are high enough to make this a bad idea.

On this basis, the Center’s numbers show electronic poll books to be a losing proposition; at best, once cost savings from non-general elections are included, the tradeoff becomes a close call. If the report’s claim of substantial ongoing cost savings from a single initial investment sounds too good to be true, that’s because it is.

Professor Max Hailperin, of Gustavus Adolphus College, has examined new technologies in voting nationwide. His written testimony was included in hearings on HF 210, Mary Kiffmeyer’s photo ID (and much more) bill that was vetoed last year by Governor Dayton.