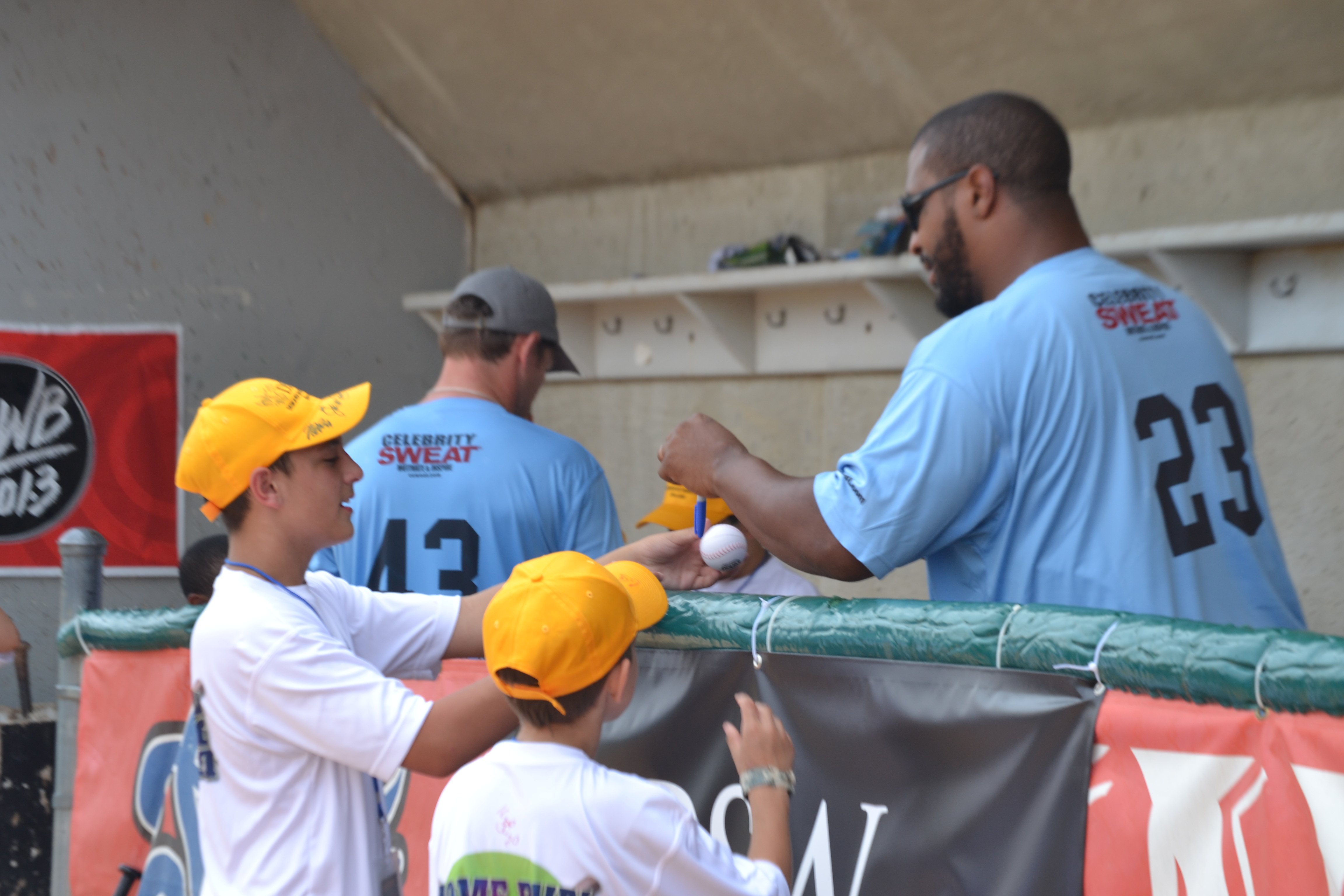 Anthony Gresafe (left) gets autograph from Daunte Culpepper  (no. 23, right).

Minneapolis, Minnesota native and NHL athlete Dustin Byfuglien was one of the many celebrities who participated in Celebrity Sweat’s annual celebrity softball event to support over a dozen local children organizations.

“I’m here for the kids, the charity and [Celebrity] Sweat. It’s an all-around good thing for a Saturday afternoon,” Byfuglien said.

One of the children’s organizations benefiting from this event was Hope Kids, an organization supporting children who are facing life threatening illnesses. Gabby Madenwaldt has been volunteering for Hope Kids for nearly half a decade and said it’s a “good [program] for children with illnesses and I’m glad to be a part of it.” At the event, she helped check-in families who attended including mother Tawana Terrell, whom arrived with her family.

Terrell has been with the program since 2007 as she’s the mother of a child who went on to become a cancer survivor. During the softball event’s pregame show; she was called to be one of three participants of the DSW Challenge, which was a race to see who could balance six shoe boxes and travel around all four bases with the fastest time. In the end, she recorded the fastest time and was rewarded with a $100 gift card to shop at DSW.

“It was great the celebrities came out to support champions like Hope Kids. They are who inspire us all to keep hope alive,” Terrell said.

DSW also sponsored the DSW Homerun Hitting Contest for Children. Anthony Gresafe was one of the adolescents who participated in the contest and had the opportunity to face Culpepper on the mound. Afterwards, the group of kids took a group photo with all the celebrities present at the event and Culpepper, along with other celebrities, gave the children autographs.

Culpeper said he’s happy to help Celebrity Sweat whenever they hold events like this.

Holyfield elaborated and explained why it’s important for him to participate in charity events.

“I came up poor and I wouldn’t be who I am if nobody didn’t give me an opportunity to,” Holyfield said. “So anytime I can leave my name or be a part of something [for the] youth… to get them to a point of success, that’s what I’ll do.”

Billy Blanks, well known for Tae Bo, participated at the event as well. Blanks said he really liked the concept of this event as it raised money for multiple causes for children, promoted fitness and brought together celebrities and families for a good time.

“I just think it’s so awesome to be able to get out here and help support the cause, and help the kids and motivate people to get off the couch and work out,” Blanks said. “It’s a blessing and anytime they ask me to do it, I’ll do it.”

Blanks said he’s also thankful because he’s come a long way and has been given a platform to help others. He explained how he started martial arts at age 11 and later became a heavy weight world champion fighter, which later led to his creation of his fitness program Tae Bo.

“I was out there doing a lot of stuff and I just thank God I was able to take my career and turn it into that exercise program and help people get in shape,” Blanks said. “For me it’s awesome and to be here with these little guys to help and support, raise money, no [better feeling] than that, to give back what they gave you.”

Although the softball match was called off in the third inning, due to heavy rain conditions; the event supported multiple causes and in at least one child’s life, it has made a dream come true.