Jaylin Reynolds and Anaya Hite riding a camel directed by a guide. Photo by Linda Williams.

Somali Minneapolis Public Television host and emcee Abdi Mohamud introduced performers who graced a stage with Somali heritage dance and music, followed by American patriotic songs that filled the summer air, as adults and children climbed atop a camel’s back and rode across a parking lot on Fourth Avenue South between Lake and 31st Streets in Minneapolis. They were celebrating Somali Independence Day on July 2, as part of a week-long celebration from June 26 to July 4.

The sky was clear was clear, they were excited, and this was not just a fun thing to do. Instead, it was a symbolic ride in remembrance of the Somali nomadic culture where the camel helped to sustain families in the arid climate of Somalia from ancient times to Somali’s independence from the British, French, and Italians in 1960 to the present. 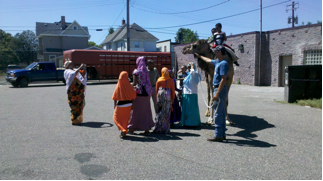 Parents placed their children on the back of the tall, sprawling camel. Then they snapped pictures as the animal pranced in a slow pace and majestic manner, around the parking lot, under the guidance of an adult guide.

Fardowza Omar said, “I am totally psyched by the camel.” Omar said she was excited because of the value the camel has brought to many Somali families over time. She expressed her affection for the camel because it provided transportation and other essential help for the Somali nomadic lifestyle. In addition to living 30 to 50 years and being powerful work animals like horses, camels can be milked like cows. Somali culture is filled with folklore about the camel. 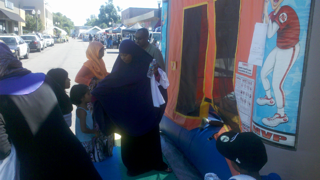 Children waiting their turn to play inside an inflated balloon. Photo by Linda Williams.

There were other cultural attractions at the celebration, too, both American and Somali. Children jumped with delight inside an inflated balloon. They waited patiently in line to get their faces painted, and adults had the option of getting henna tattoos.

Information booths were staffed with workers eager to provide Minneapolis Public Schools information to get children enrolled in prekindergarten and K-12 education and to provide American Red Cross information to deliver messages to Somali family members in the Twin Cities area from other countries. Workers also provided a host of information from organizations that help to attain healthy lifestyles such as WellShare International, a healthy connections project, and getting involved in community support organizations such as Neighbors for Nations—an effort to unite communities to help Somalis in Somalia. 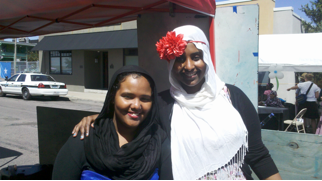 Samira Ali and a friend at the Somali Independence Day Celebration. Photo by Linda Williams

Samira Ali worked a booth that provided information about a play called Ku soo Dhawaada Xaafadeena—Welcome to Our Neighborhood at the Cedar Cultural Center — free on July 23 and 24 at 6 p.m., and with an admission charge July 28, 29, 30 and 31. (Tickets for adults $15.00, students $10.00 and free to Cedar Riverside residents.) She said it is a play about the people of Cedar Riverside that is meant to help bring awareness regarding the need to bridge a communication gap between generations of Somali grandparents, parents, and children. 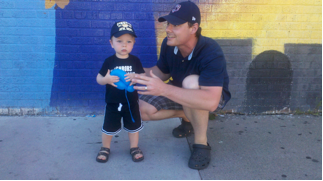 Mark Fellin with his son who is playing with a balloon. Photo by Linda Williams

As the Somali Independence Day Celebration progressed, visitors of all ages sang and engaged with each other as they participated in the festive activities. The day was sponsored by the Confederation of Somali Community in Minnesota (CSCM) and other organizations. 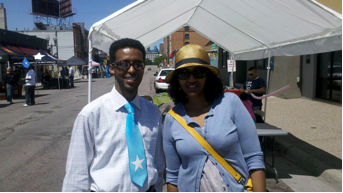 Abdi Mohamud said, “The whole idea of the event is to have your own culture and be proud of where you come from as well as become a part of the American culture.” He said July 2 was chosen to celebrate Somali independence from colonization by the British, French and Italian because it is close to July 4 when America gained its independence. That makes it a double celebration of Somali-American independence. As a symbolic reference, the United States and Somali flags were displayed at the fair.