Hmong-Americans from Minnesota and around the country ushered in 2010 this weekend at the River Centre in downtown St. Paul. The annual event, now in its 34th year, is one of the most important events for Minnesota Hmong, along with the July 4 (J4) sports tournaments held at Como Park. Both events are organized by Lao Family Community of Minnesota. With opening messages from the recently-cleared General Vang Pao, St. Paul Mayor Chris Coleman, and Minnesota Senators Amy Klobuchar and Al Franken, the event was a weekend for coming together to look back on the year that was, and look forward to whatever 2010 may bring.

The event consisted of three main parts. A large stage in the Roy Wilkins Auditorium hosted the event’s talent competitions, including modern and traditional dance contests, modern and folk singing contests, and the annual Miss Hmong Minnesota beauty pageant. In the lower level of the River Centre, two rooms featured vendors as well as tables for non-profits, employers, colleges, and Minnesota politicians. Many items for sale were the same as those in the sprawling marketplace of the J4 tournaments, including DVDs, CDs, clothing (especially traditional clothing), pa Ndau storycloth, roots and spices, toys, and medicinal products. 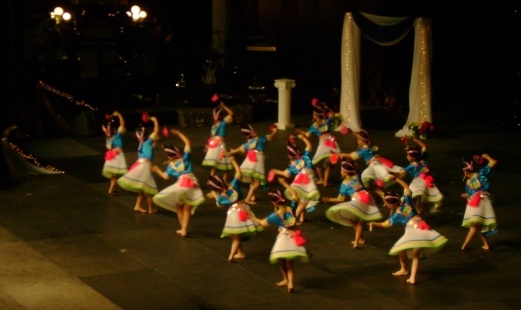 Both events are aimed at Hmong living in Minnesota and other parts of the country, with little effort to make them a type of “cultural presentation” aimed at educating non-Hmong about Hmong history, customs, and traditions. As at J4, there were no English translations of the various emcees’ information or descriptions during the competitions. And while there were more non-Hmong in attendance than at J4, they were still far, far outnumbered by Hmong attendees. (One of the more unusual sights, at least to this outsider, was seeing Caucasian Latter Day Saints missionaries proselytizing while in Hmong dress.) 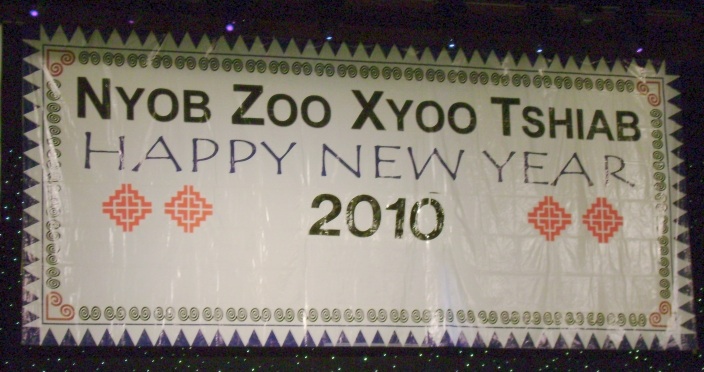 Hmong New Year does differ from J4, however, primarily through its more traditional focus. The most obvious example of this was the predominance of clothing styles associated with the traditional dress of the different Hmong sub-groups. The distinctions between the styles of dress are subtle, and various elements overlap. While some can be traced to specific ethnic groups, such as the incorporation of a white dress signifying a White Hmong woman, others, such as the turban-style headwear, cut across multiple groups. Like this style of headwear, many of the women and girls’ outfits featured elaborately-embroidered dresses and blouses. The outfits of both men and women featured silver soul-lock necklaces and many jingling medallions. If the ever-present sound of J4 was that of gasoline generators, the sound of these medallions created the sonic background for Hmong New Year. 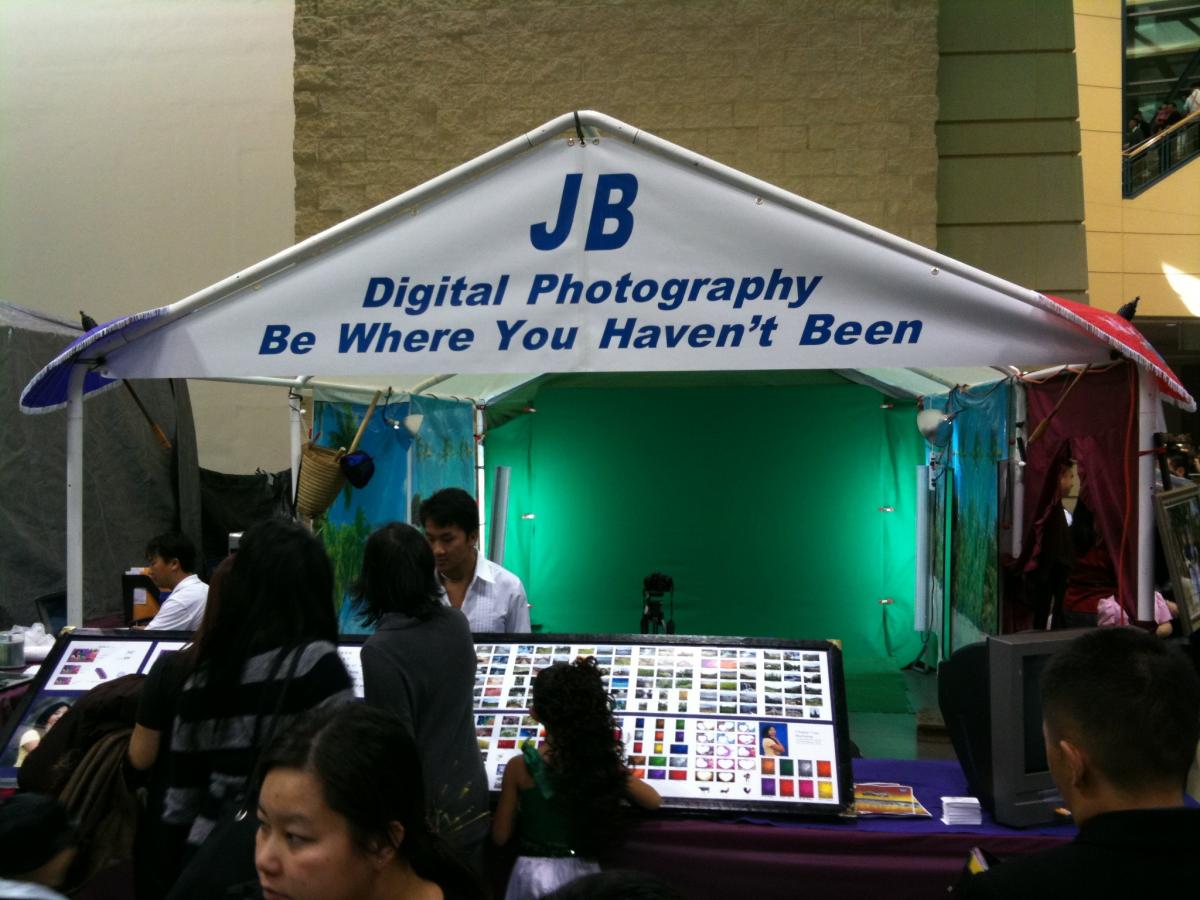 Among the more prominent vendors present, in keeping with the more traditional theme, were numerous photography booths. These offered attendees the opportunity to have their pictures taken in front of “old world” backgrounds like rural Laos or Thailand; in effect, as one booth’s sign put it, these photos allowed people to “Be Where You Haven’t Been.” Whether through the use of a green screen or different physical backgrounds, it offered at least a digital facsimile of a home-and a life-far removed from Minnesota.

The vendor and exhibit space was also the site of the pov pob or ball-toss game, the activity most associated with Hmong New Year celebrations. This is traditionally seen as a type of courtship ritual, where young singles toss a small, decoratively-crafted cloth ball to each other as a way of introducing themselves to potential partners. It didn’t seem all that strictly enforced, however, as many friends of the same gender tossed balls back and forth, and older Hmong also participated in the activity.

Any invocation of the idea of “tradition” is malleable and not strictly defined. The pov pob was only one instance of the event’s flexible interpretation of “traditional.” For instance, in the “traditional dance” category-the name of which, incidentally, was introduced in English-the music was often synthesizer-based Hmong pop music, as well as a few songs and movements from Bollywood. (The legendarily bad acoustics of the Roy Wilkins Auditorium were in full effect: the bass boomed unnecessarily and the high timbres of violins and synthesizers at times bordered on excruciating if you were sitting directly in the path of the speaker towers.)

What seemed most “traditional” about these dances were the costumes worn by the dancers, full of sparkle and glitter as the young girls moved gracefully across the stage. In the routines themselves were elements that didn’t seem all that traditional: one amazing routine had the group perform on unicycles, another incorporated the Electric Slide, and many of them incorporated gymnastic cartwheels and round-offs. The modern dance contest featured an array of styles and music, including a lot of breaking-inspired hip-hop moves, based on songs by Michael Jackson, DJ Shadow, RJD2, and, for a brief moment, that ever-present b-boy stalwart, The Incredible Bongo Band’s “Apache.” At times during both competitions, it sounded like an early Beatles concert, as young women and girls screamed their lungs out in support.

Organizers expected 60,000 people to attend this year’s event, and both of the main spaces were filled for most of the day, with traffic jams at many of the entrances and stairwells. I saw no hints of violence, such as that which marked the sports tournament at times; the large presence of St. Paul sheriffs, city police, and Asia private security officers most likely helped to ward off any such activities. In the end, the weekend marked the latest chapter in bringing Hmong from Minnesota and the country together to share memories, stories, and talents. Looking back in this way allows for the next chapters of their lives to be written.