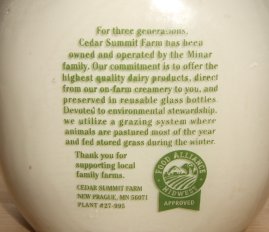 Cedar Summit Farm is one of the success stories of Minnesota’s buy-local dairies, but as City Pages reported in 2013’s Cedar Summit Farms could be forced to relocate due to power line expansion, Florence and Dave Minar’s organic and grass-fed operation wasn’t compatible with the 345,000-volt line.

The family farmers have just won a round in Scott County District County, the Star Tribune’s Emma Nelson reported today in Utility must buy the farm its towers stand on, judge rules:

A coalition of utilities that planted a power line through a small organic dairy farm can be forced to buy the whole property, a judge has ruled.

State law holds that when utilities want to push through a farm, and would threaten the farm’s existence, they must buy the entire tract of land if the farmer wants out.

“It’s a way of, to some extent, leveling the playing field,” said Paula Maccabee, an attorney for the Minars.

But the companies behind the $2 billion CapX2020 line, which crosses Cedar Summit Farm, claimed the law didn’t apply. Their transmission structure would cover less than an acre, they said, and wouldn’t have a major impact.

The Minars said otherwise, worrying that a 345,000-volt line would harm their cows and raise questions in customers’ minds.

Lennon wrote: “The presence of the [power line] on one portion of the property necessarily affects the entire property which is farmed together for the purpose of producing 100 percent grass-fed organic milk.”

The win is seen as a victory for the state’s “Buy The Farm” law, which was strengthened by the legislature in 2013. The utilities can still appeal; read the rest of Nelson’s article at the Strib.

Photo: Cream in the jar with the dairy’s story.