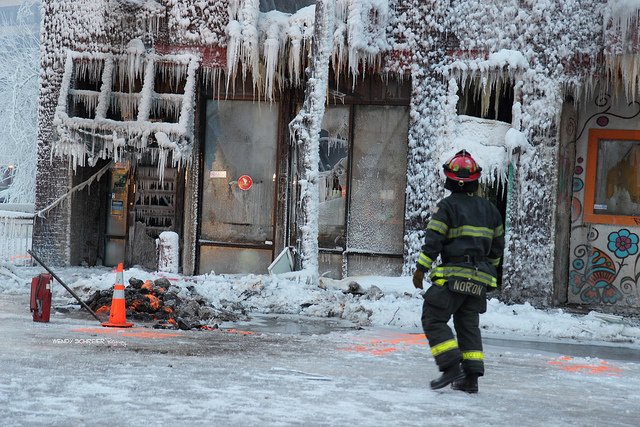 UPDATED 1/4/2014 | The New Year’s Day Cedar-Riverside fire took at least one life, left more than a dozen people injured and homeless, and destroyed a grocery store that was a community gathering place. What are people thinking and talking about on the day after?

Lolla Mohammed Nur’s column this week asks if the national media coverage of the Cedar apartment fire is connected to increased scrutiny of Somali Americans.

Fartun Ahmed, who lives in Hopkins but considers herself a Cedar-Riverside community member: “I think people are just really sad. They don’t know what to do and how to help. Everybody wants to help and do something but they just don’t know what to do. The halal market is completely gone, it was a small business. The guys who owned it had some social capital in our community and the store has been there for many many years.” Read the entire interview with Ahmed here.

Burhan Mohumed, a Somali American Cedar Riverside resident, who works as an advocate at the Brian Coyle Center: “There was one guy on Twitter who was saying things, about how this has to do with terrorism in the Somali community… and he’s not the only one. I know, in the future, people are going to start coming out of the woodworks. Personally, I don’t feel safe [with the scrutiny].” Read the entire interview with Mohumed here.

The fire at 516 Cedar Ave. S. in Minneapolis started with an explosion a little after 8 a.m. on New Year’s Day, according to the report called in to the Minneapolis Fire Department. Firefighters arrived on the scene to find people lying in the street and smoke and flames billowing from the building. By the time it ended, more than 50 firefighters battled the blaze and 14 people were hospitalized, some in critical condition. As of Thursday, two or three other building residents were reported missing. On Thursday afternoon, one body was found in the wreckage as firefighters worked to remove debris.

The cause of the fire was not known. According to the Star Tribune, “Fire Chief John Fruetel said Thursday afternoon that witness accounts of a natural gas smell and the explosion strongly suggest that gas was involved,” but CenterPoint Energy said that there was no natural gas in the area.

The building housed the Otanga grocery store and ten apartments above the store. It was next-door to the Dar Al-Hijrah mosque, which suffered some smoke and water damage.

1) Community members who wish to provide assistance to the victims of the Cedar-Riverside fire may make contributions through the Brian Coyle Center by calling 612-787-3730. The Brian Coyle Center, 420 15th Avenue S, Minneapolis, MN 55454, is open from 8:30 am to 8 pm, Monday through Friday; 10 am to 5 pm on Saturday. Checks should be made out to “Pillsbury United Communities” or financial contributions can be made online at http://www.puc-mn.org/donate. Note “Cedar-Riverside Fire Disaster Relief” on all donations.

2) Confederation of Somali Communities – donate on their website, and write “Cedar-Riverside Fire Disaster Relief” in the box that says:

“If you have a special purpose for your donation, please let us know.
I want my donation to be dedicated:”

The Cedar Cultural Center is planning a benefit for West Bank fire victims on Jan. 24.

Maybe — but how is not entirely clear. While some media reported that the Red Cross and the Confederation of Somali Communities are collecting aid for the victims of the fire, there was no way set up to donate by late afternoon on Thursday, January 2.

Reached by phone, the Red Cross said that they are NOT setting up a specific fund, but will accept donations for their general disaster relief fund. They are helping families affected by the fire.

While the CSC website said, “Confederation of Somali Community in Minnesota will have a disaster relief fund open on Thursday, January 2 to accept donations,” there was no way to contribute to a specific disaster relief fund by late Thursday afternoon, and calls were referred to voice mail box that was full and could not accept more messages.

MPR reported that “A fund for victims has been established by the Confederation of Somali Community in Minnesota at Wells Fargo Bank. The Cedar Cultural Center and neighborhood activists are organizing a benefit for West Bank fire victims on Jan. 24.” As of 5 p.m., Wells Fargo was unable to confirm.

Explosion, fire in Cedar-Riverside injure 14, cause not yet identified by Emma Nelson and Kia Farhang, The Minnesota Daily • An explosion and fire at a Cedar-Riverside building Wednesday morning injured 14 people, 6 critically. The building, located at 516 Cedar Ave., is owned by Garad Nor of Wadani Properties LLC and houses apartments and a grocery store.