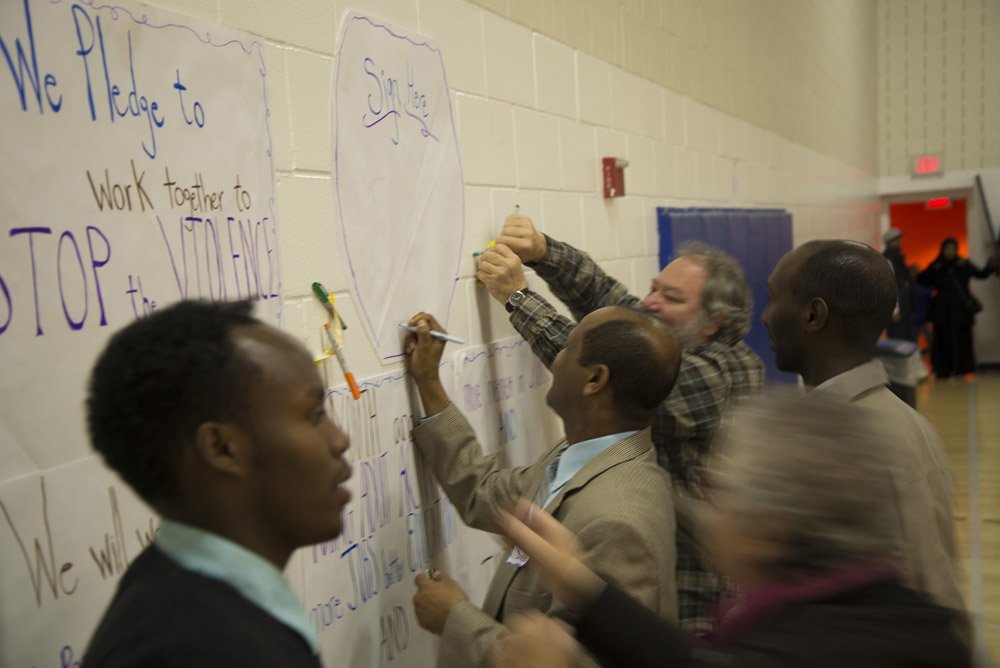 “I spent most of my 17 years growing up going through the programs here,” said Burhan Mohumed, a 23-year-old who now acts as a mentor at the Brian Coyle Center. “It’s like that with a lot of kids, they spend the majority of their time here. It’s really the heartbeat of the community.” The Brian Coyle Community Center recently completed renovations to its gym with the hope it will be able to better serve community youth.

On November 15, Mohumed was among the friends and community members who celebrated the center’s newly completed gym with food and youth presentations. The much-needed renovations replaced the old concrete and linoleum floor with a modern wooden basketball court, and also added new basketball hoops and bleachers.

The community center is a vital resource for residents of Cedar-Riverside housing complex and the Cedar-Riverside Community charter school, providing social services, as well as self sufficiency, youth and volunteer programs.

The $110,000 project was made possible by funding from the Minneapolis Park and Recreation Board (MPRB), Pillsbury United Communities, which runs the center, and the Neighborhood Revitalization Project.

Amano Dube, the center’s director, says the renovations are part of positive trends he’s seen in the community over the last few years.

“Violence used to be very tragic, around 2007 there were a lot of shootings,” said Dube. “But the community has worked hard to remedy it. It’s very exciting to see so many diverse people enjoying themselves, it shows we have the spirit of family and community.”

High levels of poverty and joblessness are leading causes of violence, says Dube. The center has been working hard to help as many people as it can, but struggles to keep up with demand.

“It’s is probably the largest affordable housing complex between Chicago and San Francisco,” said MPRB Commissioner, Scott Vreeland. “But it doesn’t have a traditional school, with things like a library or gym, which amplifies the need for extra effort.”

With a new gym, the community center will now be able to serve as the home court for the Eagles, the Cedar Riverside charter school team, as well as better serving Ceder-Riverside’s 2000 youth.

The gym host’s K-8 grade after-school programs and a busy open gym from 6pm – 8pm. With the high level of interest they are hoping to keep the gym open until 11pm, but finding the funding is a challenge.

“It takes a village to raise a child,” said Ali Saleh, one of the youth involved with organizing the gym project. “There has been a history of violence, but with the right resources, it will stop.”

CORRECTION 11/19/2013: Thanks to Abdi Rahman Mukhtar for catching a couple of spelling errors, now corrected!

Snacks for the guests

Youth from GIRLS, Girls Initiative in Recreation and Leisurely Sports