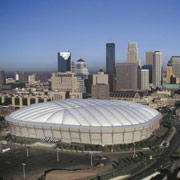 As Minnesota ponderously negotiates a new professional football stadium deal, replacing the aging and increasingly obsolete Metro Dome, it’s simultaneously navigating the challenging waters of public opinion. If Minnesotans can be convinced to support project public financing, they must feel that Minnesota is getting a good deal.

Glendale, Arizona, is desperate to retain its NHL hockey team, the Phoenix Coyotes. Desperation comes with a price tag. A month ago, the city proposed floating $136 million in general-obligation municipal bonds. Twenty-five million of that is a payment to the NHL, compensating for 2010 and 2011 financial losses. Glendale taxpayers are on the hook for a struggling hockey team.

Even worse, the city’s bond rating is falling because of this financial arrangement. The agreement’s very presence costs Glendale more money to borrow money for any purpose because of the debt obligation. Struggling to stay afloat, the city is cutting essential and community stabilizing services. While the wisdom of ice hockey in the desert is a separate matter, an ill-considered hockey financing scheme is a poor use of public resources.

Nearly 20 years ago, the LA Rams decamped to St Louis. St Louis, furiously working to attract a pro football team to replace the earlier departed Cardinals, built a football stadium, now called the Edward Jones Dome. The Ram’s contract calls for the city to provide a top-8 stadium. The Edward Jones Dome is, by the contract’s terms, no longer a top-8 facility. Unless that changes, the Rams may leave St Louis, possibly returning to Los Angeles.

St Louis and Missouri tax payers, now over a barrel, have offered a publicly-funded renovation plan. While still owing $153 million on the present stadium, the city and the state propose investing another $124 million in facility upgrades. St Louis is the eighth smallest NFL market, competing with larger market, deeper pocketed teams. The Rams are thinking about it.

The lesson, in both situations, isn’t only found in public-value-through-public-financing debates but in a long-term lease agreement’s terms. A good deal must be good for all parties. Desperation never creates equal opportunity, only heartache and closed libraries.