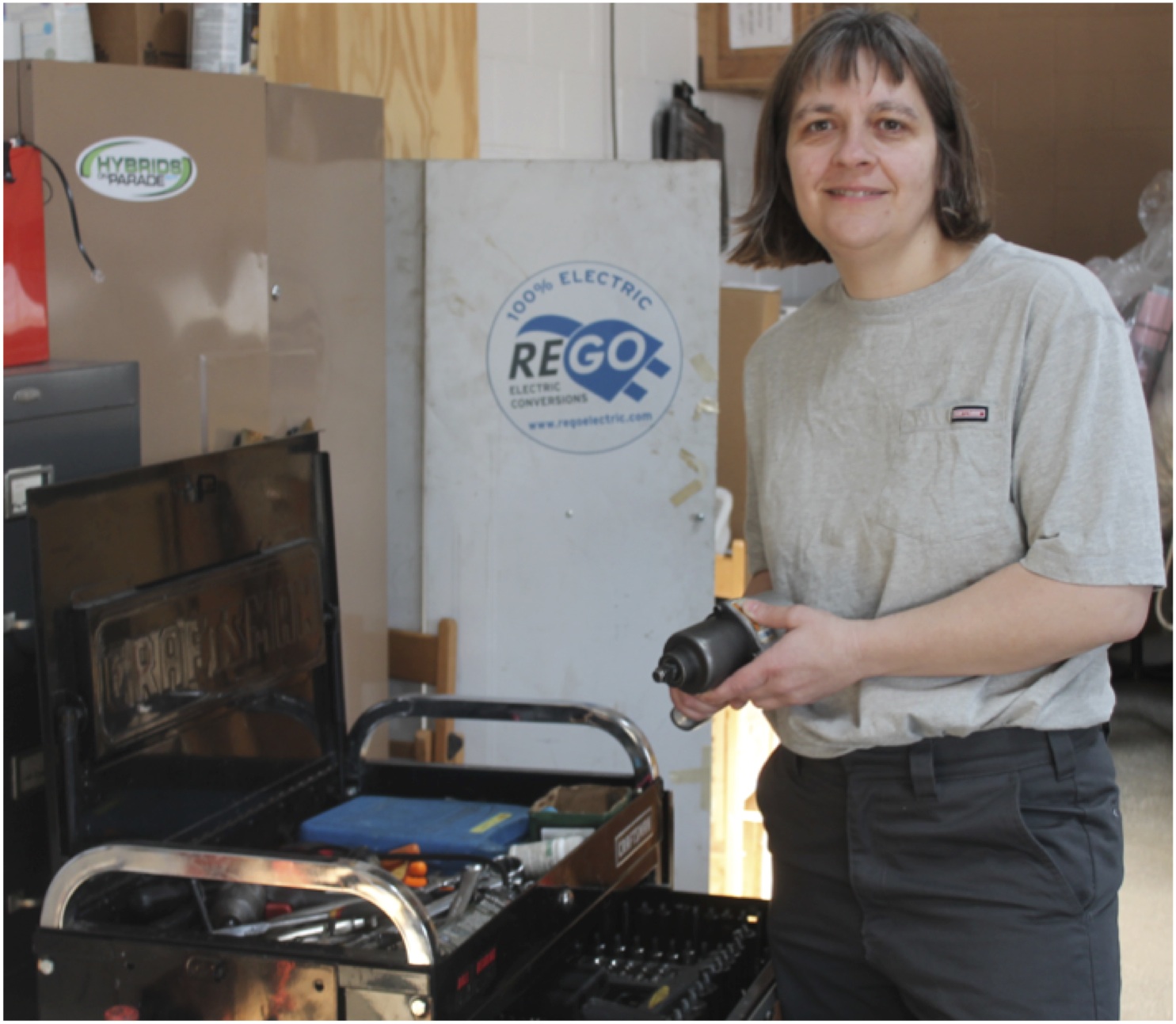 Cathy Heying, The Lift Garage executive director, poses for a photo after an April 27 interview with TC Daily Planet at The Lift Garage in Minneapolis. (Photo by Ibrahim Hirsi)

When Cathy Heying served on the pastoral staff at St. Stephen’s Catholic Church several years ago, she took note of the common issue facing those who came to the church for assistance: they needed running vehicles.

Heying learned that people are in need of cars to get to work on time. Because most of them live each week from paycheck to paycheck, it’s difficult for them to have their old, malfunctioning vehicles repaired.

Heying decided to fight the issue herself.

In 2008, she went to Dunwoody College of Technology in Minneapolis, earning an associate degree in auto technology two years later. (This is in addition to her master’s degree in pastoral ministry and bachelor’s degree in social work).

In April, Heying opened The Lift Garage, a non-profit organization that provides low cost car repair for low-income Minnesotans. In the future, the organization hopes to provide a job-training program for the poor, homeless and those just released from prison.

Jennifer Rodgers, of Brooklyn Park, was one of the first clients whose 2006 Chevy Impala was repaired at The Lift Garage.

“My car was shaking a lot and my brakes were going out,” she said. “I felt unsafe driving it. My income was really limited. If I took it anywhere else to get it fixed, it would have been $700.”

And she couldn’t afford to pay that much money.

Rodgers, a mother of four, has been unemployed since January, when her 9-year-old son was diagnosed with brain tumor. She drives him to therapy five days a week. She was in need of a safe car.

Hearts & Hands, a program that provides resources to families whose children face life-threatening illness, referred Rodgers to The Lift Garage, where her vehicle was repaired for about $200.

“Cathy is great,” Rodgers said. “All the people that she has over there working on the cars are great. They showed me what was wrong with the car. They were able to fix it for me. They took the time to explain the problems with my kind of vehicle. They were just great and friendly.”

Although on weekdays, Heying is a human rights advocate at St. Stephen’s Human Services in Minneapolis, she serves on weekends as the executive director of The Lift Garage, which is subletting space from ReGo Electric at 5925 Nicollet Avenue, Minneapolis. It’s open on Saturdays and Sundays, from 12 p.m. to 5 p.m.

The Lift Garage supports economically disadvantaged groups. For now, single-person households with $17,000 or less annual income and families of four with $24,000 or less a year qualify for the service. Clients must be referred by an established social worker or an organization familiar with clients’ income.

The labor service is $15 per hour.

The garage is sustained through community and individual contributions. Heying said she has raised about $50,000 in individual donations and about $20,000 in small grants.

Heying and her team have repaired five cars since The Lift Garage was opened in early April.

Andrea Gross, volunteer receptionist at The Lift Garage, said helping the cause is both educational and a community service for her.

“It exposes me to something I don’t know about,” Gross said. “I don’t know anything about car mechanics and how it works. It’s educational for me, but ultimately, what is satisfying about it is that I’m helping keep people safe.”

Gross added: “I feel like my ability to answer calls from people and acting as a receptionist helps support [The Lift Garage] mission and the overall idea of solving the problem of homelessness.”

The garage offers services in tire and battery maintenance and full repair services in suspension and steering, according to The Lift Garage website. The garage doesn’t repair air conditioning or cruise control, nor does it rebuild or overhaul engines.