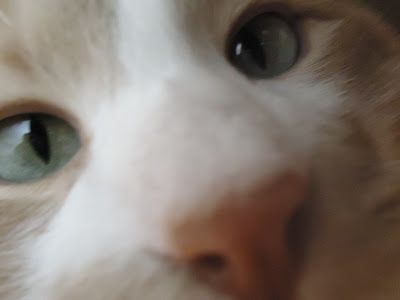 T turned 40 this year. He admitted he was feeling a sense of … well, midlife angst. I wondered how he would deal with it. Would he find a girlfriend? A sports car? Golf? Around that time we visited our local Chuck and Don’s which is where we buy Oskar’s food (elderly Olive is on a prescribed diet) and T fell in love with an orange tabby. “He’d be a perfect playmate for Oskar!”

Deciding to humor T, I bargained, “If he is still homeless when we are on spring break in two months, he can come home with us.”

Two months later the little orange tabby remained without an owner. I waited a day then called C&Ds and asked what we needed to do to initiate an adoption. “He was just taken today!” I was told. Well that was that.

But T was still in angst. We spent much of our spring break visiting local Humane Societies, auditioning for perspective pets. None of them seemed interested in us. If a two-cat home was our destiny, I was OK with that. On a final whim we headed to a shelter on the outskirts of the Twin Cities. In one of the kitty rooms an obese strawberry-blond locked eyes with us. We searched for any notes describing him. All that the previous owner wrote was “He likes to be petted.” After five minutes hanging with him we decided to get his background information from the staff.

“He is a really nice cat, a real lover,” they told us. “But…” He’d been in the shelter for weeks following his original owners divorce. One failed adoption behind him (The would-be owner was convinced by friends that he had too many issues to be a good pet and she returned him after three days.) and already the staff sounded like they thought he was bad news. “He hates dogs, hates other cats, doesn’t really play much. He is terrified of car rides and hates being brushed. He is very slow to adapt.” At twenty pounds he is nearly twice his healthy body weight. Obesity puts him at risk for diabetes, arthritis, and organ failure. The more they talked, the more red flags waved away our belief that he had chosen us to be his family. We went back to our two-cat home and tried to put the chubby guy out of our minds. But it was impossible.

This week, we returned to the shelter to bring our guy home. He saw us through the window, packed his bags, and was waiting for us when we opened the door. More red flags flew as we filled out the paperwork. He’d developed a kitty cold and would need to be quarantined for at least nine days. We’d need to pill him four times a day, and unlike our docile Olive and Oskar, this pal doesn’t like taking medicine.

Our vet told us that it may take up to two years for our new boy Orson to lose the 8 or so pounds that he needs to, and he has other issues that will make him our special project for a while. He has bad teeth, filthy ears, dry paws, flaky skin, and mats. His size makes it impossible for him to thoroughly clean himself, and so his hygiene issues extend from his tummy to his tail. But so far, everything else the staff warned us about doesn’t seem to be true. He loved his car ride. He is curious about the sounds and smells of his new brother and sister (but cannot meet them for at least another week). When he sees me pick up his comb, he comes running and rubs his little face against me while I groom him. The vet assured us that at 4 years old, Orson is young enough to get fit and live a healthy, happy life.

Every day Orson seems more content. He is learning to play like a cat, and loves chasing strings. And yes indeed, “he likes to be petted.” 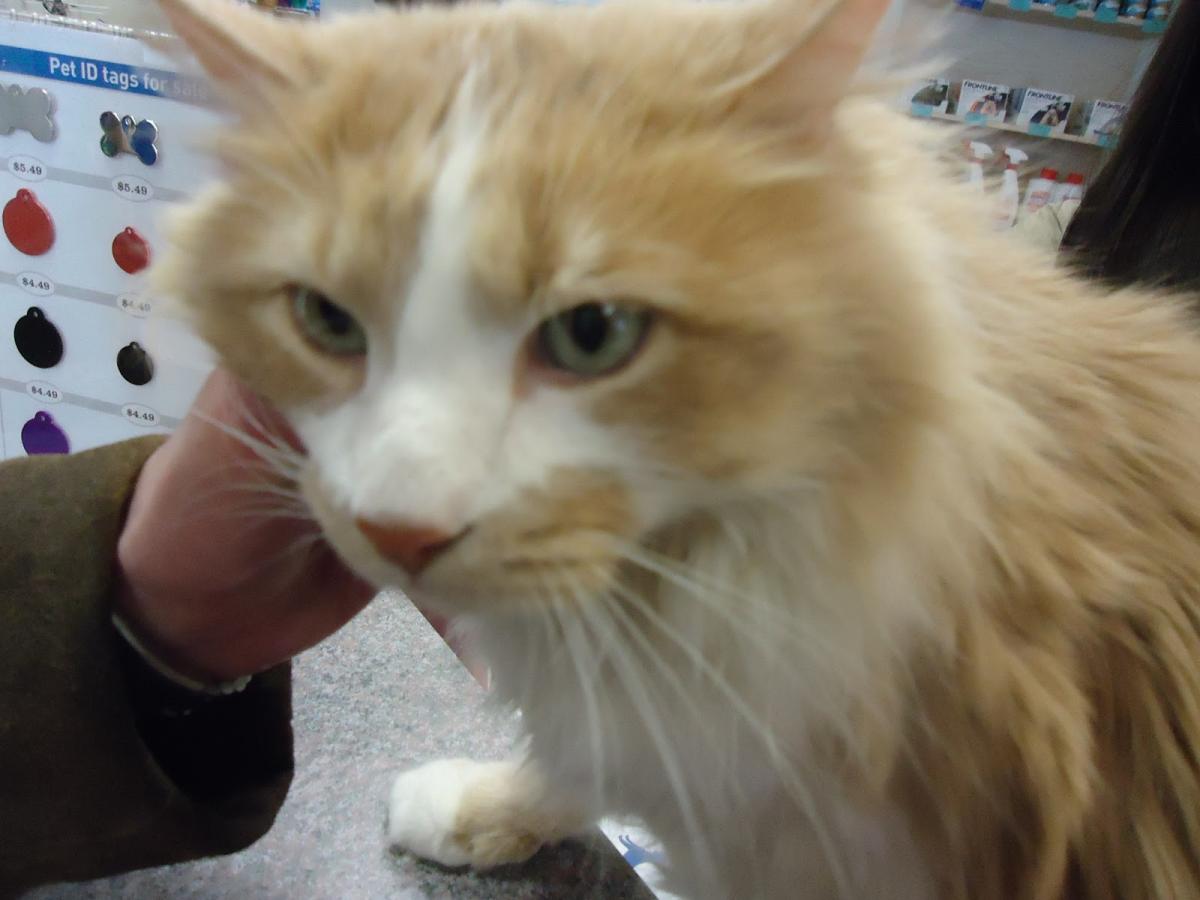 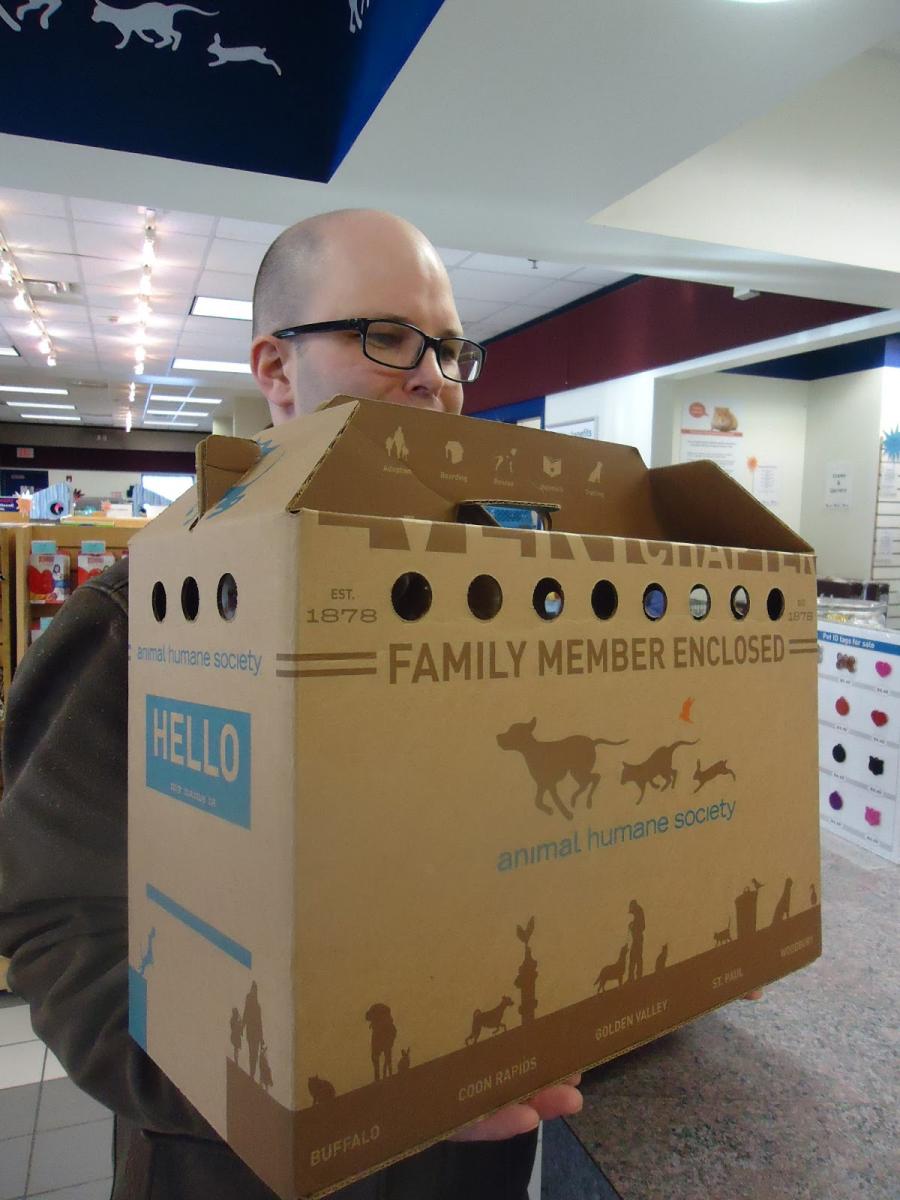 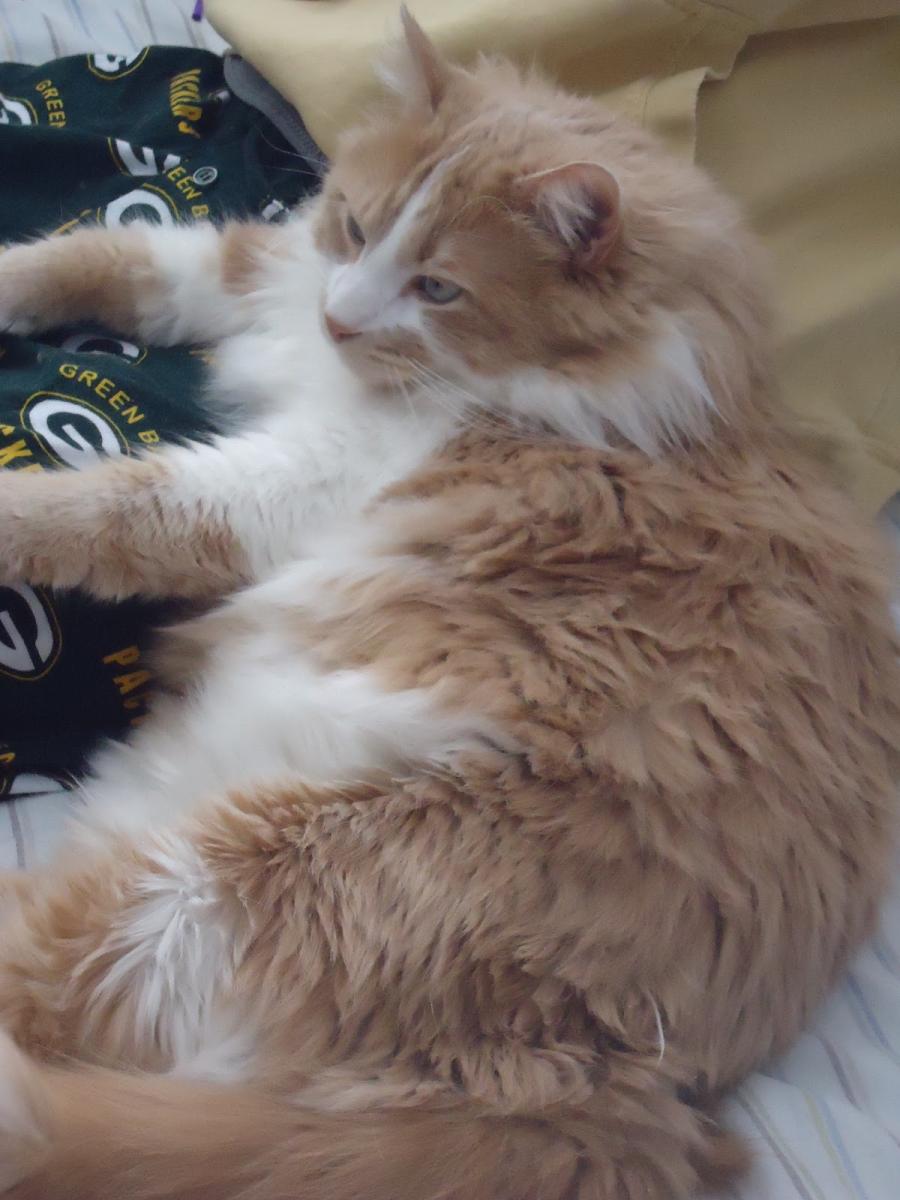 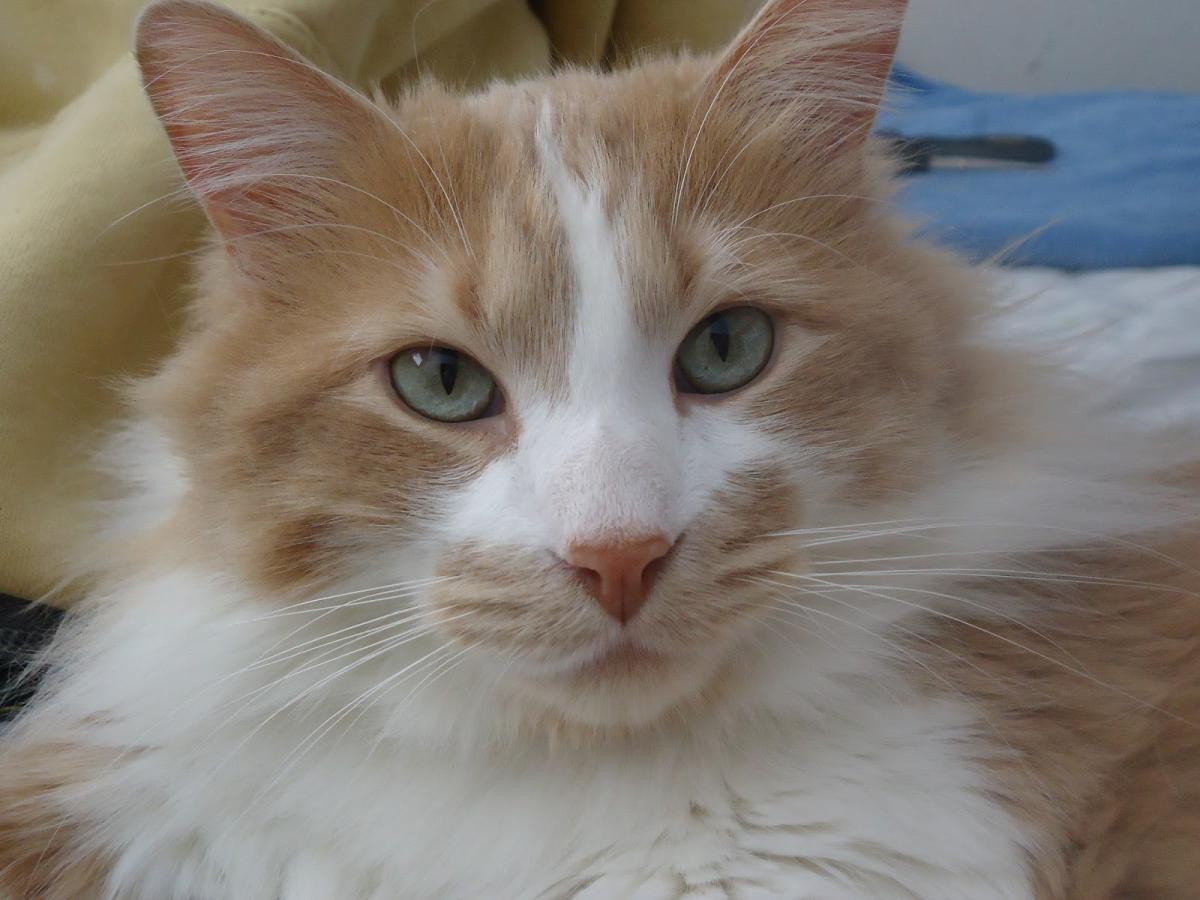 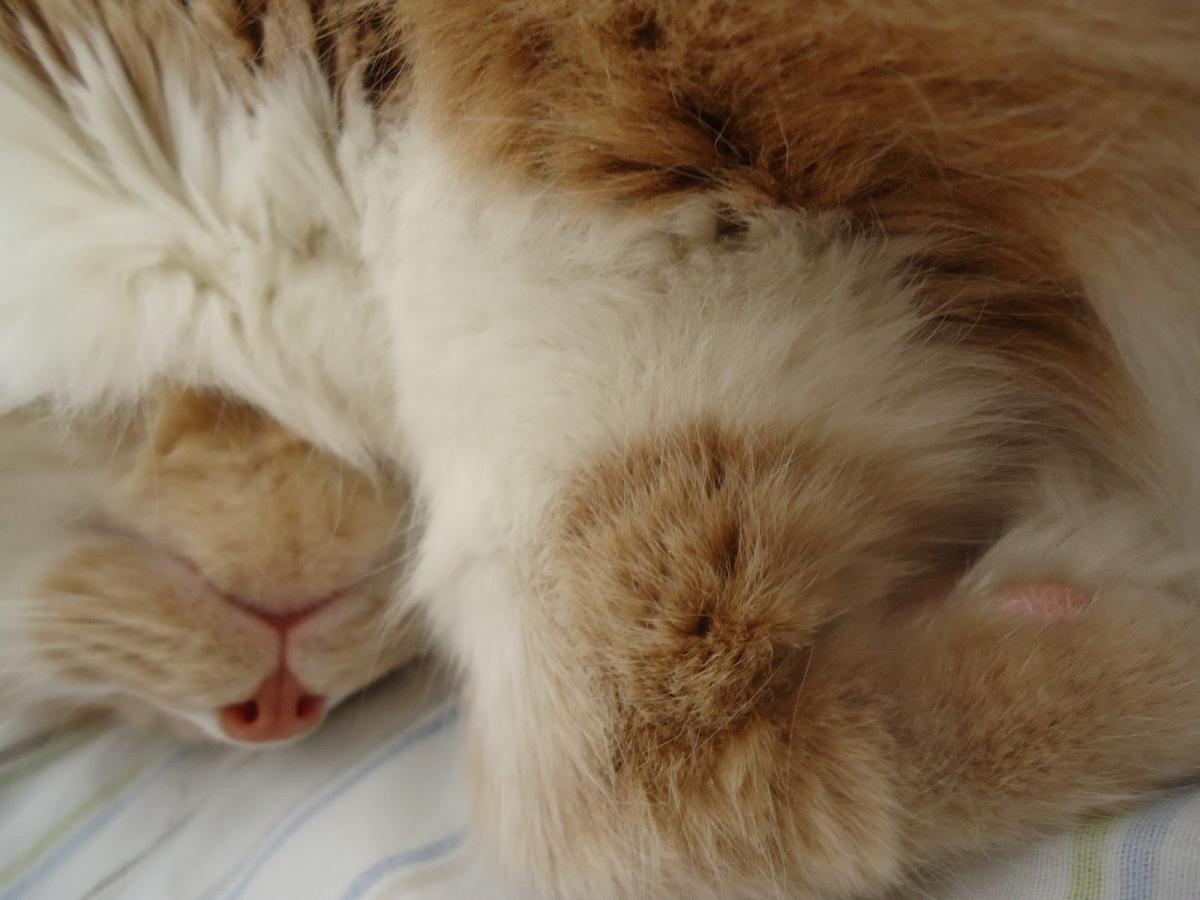 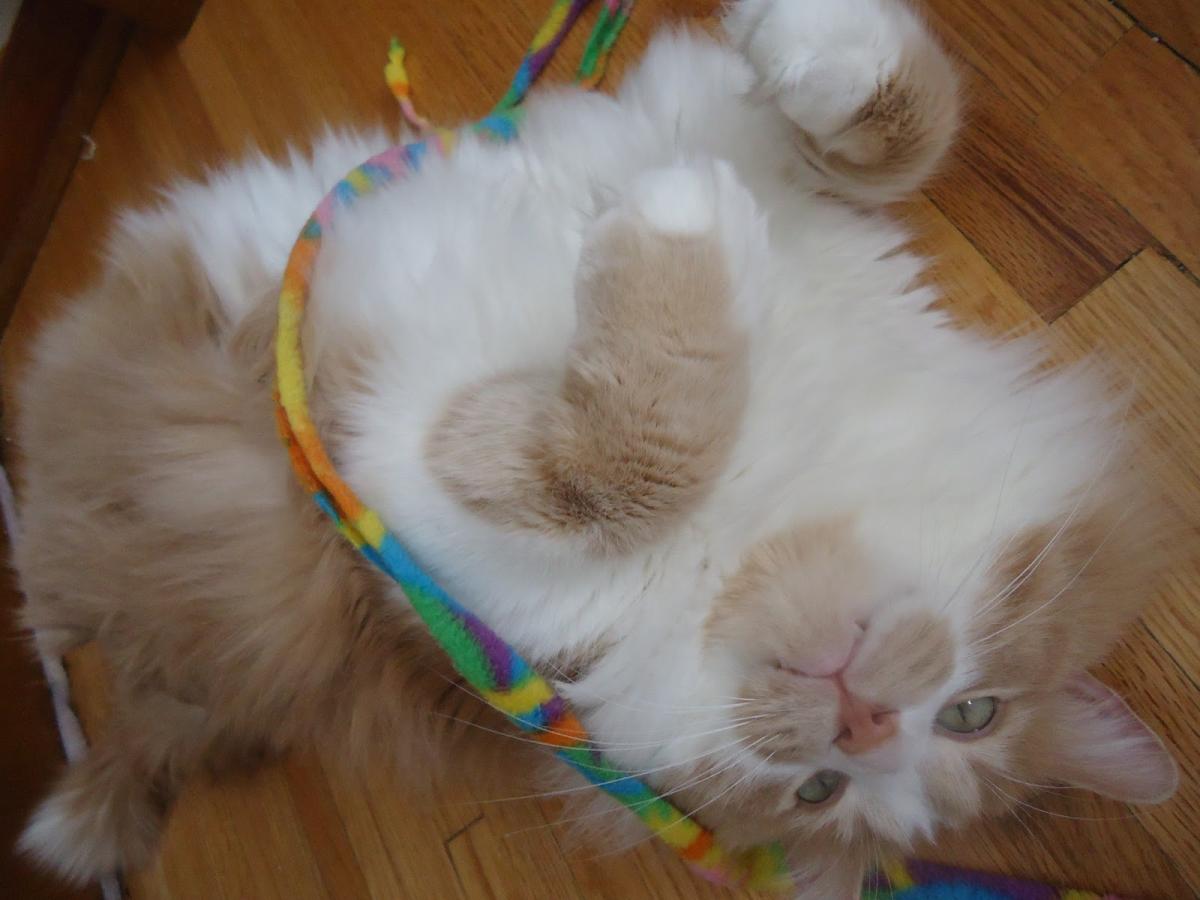